More than 3,000 people have signed an on-line petition urging American Crystal Sugar to end its lockout of 1,300 employees, the Minnesota AFL-CIO reported Wednesday. Meanwhile, the workers are building support in the communities of the Red River Valley. Some 96 percent of the members of five locals of the Bakery, Confectionery, Tobacco & Grain Millers union voted Saturday to reject the company’s latest contract offer. On Monday, they went to work only to find the doors locked.

Replacement workers, hired through a firm called Strom Engineering, have taken their jobs.

“Instead of letting 1,300 people continue working while a fair contract is negotiated, American Crystal Sugar executives have instead decided to hurt our communities with an unnecessary lockout,” said John Riskey, president of BCTGM Local 167G.

Riskey said the workers could not accept a contract that would put their jobs in jeopardy and undermine health care coverage for their families. The union has filed unfair labor practice charges against American Crystal Sugar, alleging the company has not bargained in good faith.

American Crystal Sugar says it has “no intention of dismantling the union” or “permanently replacing workers.” 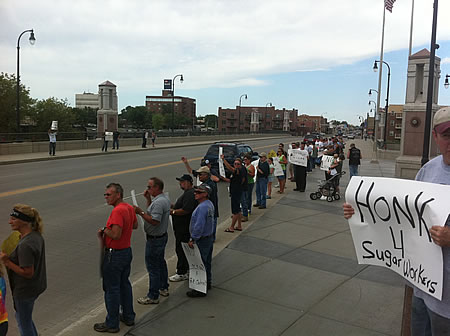 Locked out sugar workers and allies demonstrated against the actions of American Crystal Sugar. (Photo by Jessica Hayssen, Minnesota AFL-CIO﻿)

The AFL-CIO’s on-line petition is among several strategies for building support for the locked-out workers. The federation also is airing radio ads urging American Crystal to keep employees on the job and negotiate a fair contract.

Last week, Minnesota Governor Mark Dayton traveled to the area and talked with both labor and management.

“I’m very concerned when there is a threat of a lockout and bringing in replacement workers,” Dayton said at a news conference. “I’ve seen that situation in Minnesota in the past, and I don’t want to predict bad occurrences, but sometimes they can be very volatile.”

Union members also are contacting members of Congress, including Rep. Collin Peterson, D-Minn., who has worked closely with both the union and the company on agricultural legislation and federal trade policy.

Locked-out workers are picketing the hotels where replacement workers are staying. Editorials in local newspapers, including the Fargo Forum and the Crookston Times, are calling on both sides to return to the bargaining table. No talks are scheduled.