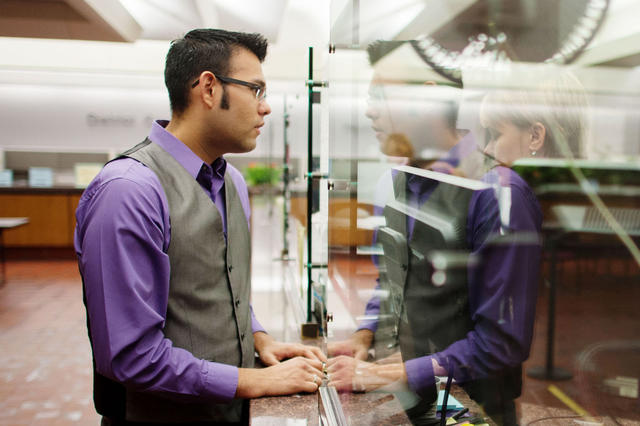 Graduate student Daniel Perez requests his personal records Tuesday at the Hennepin County Government Center in downtown Minneapolis. He said he’ll use them to apply for the two-year deportation deferral that the federal government now offers as part of the Deferred Action for Childhood Arrivals program. (Photo by Anthony Kwan)

From the age of 16, Uriel Rosales Tlatenchi knew not to tell anybody he was an undocumented immigrant.

He said he felt left out at that age as he watched his friends getting their driving permits and jobs — things he knew he would never get to do.

When it came time to apply for college, Tlatenchi’s citizenship once again stood in his way when he had to put his dream of attending the University of Minnesota on hold.

“I was constantly a good student,” he said, “and then later on I found out I couldn’t apply to FAFSA.”

The Chicano studies and sociology senior is one of about 140,000 undocumented student immigrants in the nation, many of whom could benefit from a new federal initiative that grants two-year deportation deferrals.

Young people who arrived in the U.S. before age 16 and have lived here for at least five years are eligible for the new program, Deferred Action for Childhood Arrivals, which began accepting applications in August.

DACA doesn’t give undocumented immigrants legal citizenship but rather is an opportunity to be deferred from deportation for a two-year period — which is renewable — and given work visas.

More than an estimated 6,000 undocumented immigrants in Minnesota are eligible to apply for DACA, according to data from the Immigration Policy Center. That’s less than 1 percent of about 936,000 potential beneficiaries between the ages of 15 and 30.

President Barack Obama announced the creation of DACA in June, following his failure to push legislation that would have provided legal citizenship to the children of undocumented immigrants, known as the DREAM Act. The bill could not pass the U.S. Senate in 2010.

In his announcement speech, Obama introduced DACA as a “temporary, stopgap measure that lets us focus our resources wisely while giving a degree of relief and hope to talented, driven, patriotic young people.”

Opponents of the DREAM Act say the measure would encourage more people to immigrate illegally and wouldn’t address immigration reform.

But Louis Mendoza, department chair of the University’s Chicano and Latino studies and associate vice provost of Office for Equity and Diversity, said students at the heart of the issue are caught in a struggle between domestic and foreign policies.

“Without having legal status here, they have very limited opportunities as adults,” Mendoza said. “They have no standing to get a good job with benefits.”

Eric Cruz said his experience growing up as an undocumented immigrant was dehumanizing.

Cruz, a Chicano studies senior, said his parents told him they were going on a “journey to search for a better job or work” when they crossed the border 15 years ago.

“When I was walking through the desert, I honestly did not know that I was crossing borders or that I was doing something which was considered illegal,” Cruz said.

He said he was afraid of what his classmates would say if they found out he was undocumented, and some of his friends chose to return to Mexico because of that fear.

Resources like the Dream Educational Empowerment Program — a program through the youth-led national group United We Dream — exist to help undocumented immigrants take advantage of DACA and pursue careers and education without the fear of exposing themselves, coordinator Julieta Garibay said.

“I can understand,” she said. “It’s a legitimate fear.”

Juan Escalante, a spokesperson for the website DreamACTivist.org, said the site reaches out to undocumented student immigrants to encourage them to share their stories.

“Students need to operate in the basis of self,” he said. “Empower them to know that they do not need to be afraid, they can bring change to their community and they have a network behind them.”

DACA is only part of the solution

He said some of his conservative friends would comment on his Facebook posts about immigration but “didn’t know my story.” Those friends changed their perspective after he told them, he said.

“My friends who did not know, they were very understanding and supportive,” Perez said.

He said DACA is a step in the direction of positive immigration reform, but passing the DREAM Act would be the only true relief.

“If we’re looking at the bigger picture of immigration and trying to provide not only a relief but a patch to citizenship and legality to millions of people, especially students, I think the DREAM Act is the only way of doing it,” he said.

Cruz said he feels DACA will help many undocumented students, but people like his brothers and sisters who don’t go to school and only work need some sort of reform or policy to defer deportation.

DACA, he said, is just one step to larger immigration reform.

People need to look at the bigger picture and “think about how [undocumented student immigrants] will contribute to society and find a positive resolution,” Mendoza said.

“I think that people need to recognize that this is a global role,” he said. “People of the U.S. should not feel like we’re victims of immigration.”