Apolinar walks to his Chicano studies class Tuesday in Folwell Hall. Though Apolinar was born in California and grew up in St. Paul, Minn., his parents live in the country illegally. (Photos by Mark Vancleave)

In the middle of eighth grade, three weeks before a large exam, Apolinar woke up to two policemen at his front door in St. Paul asking for his parents.

Editor’s Note: A University of Minnesota student’s name was changed in this story to protect his identity due to fears his parents could be deported.

Midway through the school day, he was called down to the principal’s office where his aunt was waiting. His parents had been deported to Mexico.

Apolinar is now a freshman in the University of Minnesota’s College of Education and Human Development and is looking to apply to the School of Nursing.

“My aunt told me to go home, pack up everything because you’re going to Mexico with your mom and your little brother,” Apolinar said.

Though he was born in the United States, his parents were from Zacatecas, Mexico and came to Minnesota illegally in the 1980s.

The 2012 presidential campaign has brought illegal immigration issues to the forefront of minds for students like Apolinar. Many of the presidential candidates vying for the Republican nomination have expressed their desire for tougher border control policies and fewer pathways to citizenship for illegal immigrants.

These children face different obstacles growing up that often go unseen. The report points out health and learning gaps between children with parents of legal status and those of undocumented parents.

The percentage of children without health insurance almost doubles from children of U.S. citizens to children of unauthorized parents — from 8.3 percent to 16.4 percent, according to the report.

There is an even bigger difference: Most children with documented parents don’t leave home each morning fearing the worst.

“Every day was a constant fear for me that my parents might get caught again,” Apolinar said.

Apolinar and his then 2-year-old brother were U.S. citizens but were deported with their parents. He had to return to Mexico to stay with his family.

“When America deports its own citizens, you feel a little betrayed,” Apolinar said. 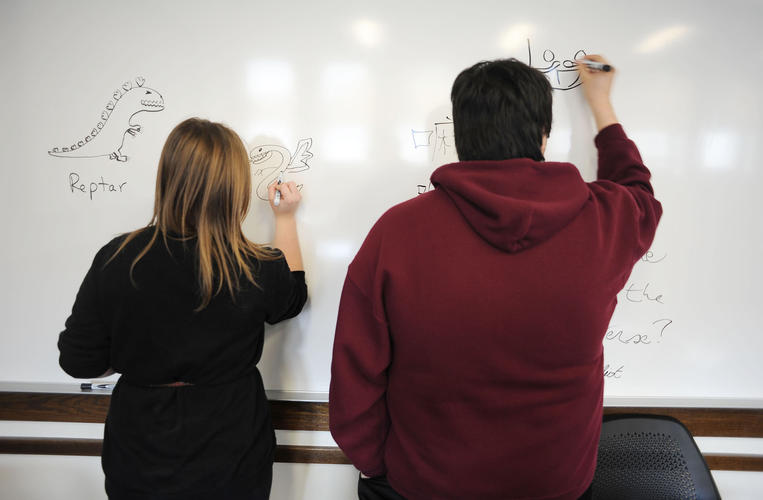 Apolinar, right, and a classmate draw on a whiteboard before their Chicano studies class Tuesday in Folwell Hall. Apolinar was deported when he was in eighth grade when his parents, who are not citizens, were forced to return to Mexico.

The La Raza Student Cultural Center at the University tries to combat stereotypes of immigrants in the U.S. by taking action.

“A lot of [related issues] focus on humanizing the topic but not really fighting against some of these policies,” said La Raza events coordinator Uriel Rosales-Tlatenchi, a sociology and Chicano studies senior.

La Raza offers scholarships to undocumented students who don’t have access to financial aid as well as provide campus tours to K-12 groups visiting the University.

After just a week of living in Mexico, Apolinar, his mother and baby brother traveled back to the U.S. by floating on an inner tube across the Rio Grande.

Today, he is persistent about one issue — informing other students his age about the life they take for granted as children of American citizens.

“The way I see most of my American peers, kids don’t take things seriously,” Apolinar said.