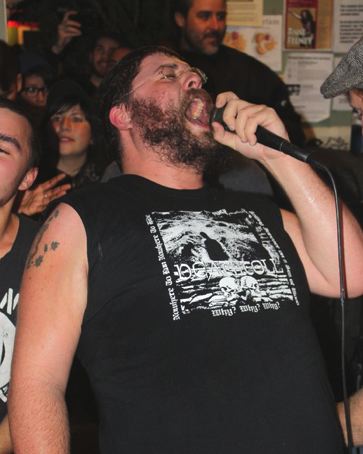 The San Diego-based, anarcho-klezmer punk ensemble Di Nigunim played Minneapolis this weekend, a stop in the middle of their tour of the U.S. and Canada. The punk klezmorim are opening for The Barons of Tang, from Melbourne, Australia. The venues they played here are part of the underground rock scene in the Twin Cities — the gigs are publicized by word of mouth and other social media.

Vocalist and frontman Ben Ziff — “Binyamin,” he says, when introduced to a writer — is a former disciple of the Lubavitcher rebbe, and apparently has left the fold; but he hasn’t left Yiddishkeit behind: the band’s second number was a full-throttle, scorching rendition of “Lecha Dodi” that ignited vigorous moshing. “Havenu Shalom Aleichem” and a ditty called “Mazel Tov Cocktail” also make the set list.

The band’s name is the plural form of the Hebrew word nigun, which means “tune,” and, in the Hasidic context, denotes a wordless song of worship.

Another Jewish member of Di Nigunim is Forest Borie, who plays accordion. In an interview with the Heeb ‘n’ Vegan blog, Borie explains that the livewire group is ”definitely a punk band with a klezmer slant and not the other way around. We try to make up in furious dance energy what we lose in musicianship. Our band has some amateurs, like myself, but also some superb true talent, like our singer/guitarist, Ben, and our trumpet player, Sean.” 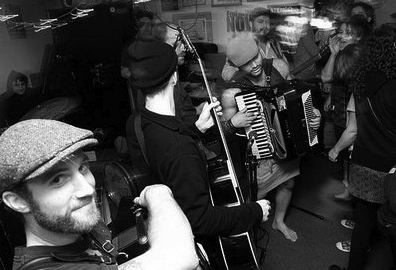 Borie counts three Jews in the Di Nigunim linup and comments, “I think that makes us not a Jewish band, just people playing very Jewish music. My bubbes don’t really understand our music yet because they still haven’t caught a live gig. Our E.P. doesn’t capture our energy like a sweaty wall-smashing house show. If I were a baseball player, my mom and grams would never miss a game… but they’re all really happy for me; they know I’m doing something positive and having fun.”

The crowd in Minneapolis can testify that the band and everyone at the show was having good clean, sweaty fun.