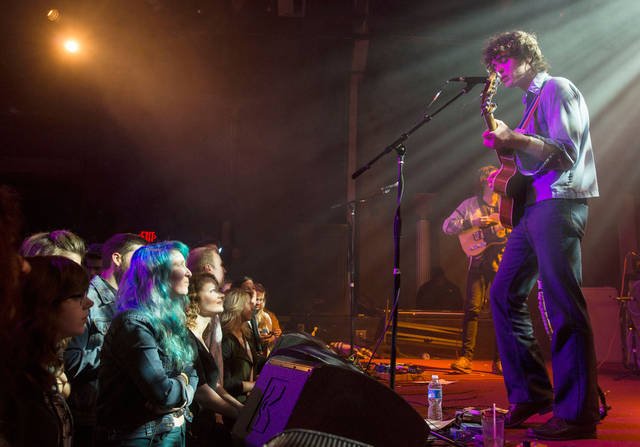 Audience members listen and dance to Night Moves close to the stage at the Varsity Theater on Friday night. The proposed ordinance would require venues to provide earplugs to concert attendees. (Photo by Patricia Grove)

A new city law might force music venues to give concertgoers’ ears a break.

The change would come in the form of free earplugs, which Minneapolis venues would have to provide under the new ordinance.

Some businesses disagree with the change, saying it’s unnecessary and could negatively affect revenue, while other stakeholders say that providing free hearing protection is important.

A City Council committee Tuesday weighed the pros and cons of the proposal, introduced by Ward 3 City Councilman Jacob Frey, who represents neighborhoods around the University of Minnesota.

Hearing loss is a growing issue, Frey said, especially for young people who listen to music throughout the day and go to loud concerts at night.

The ordinance would affect adult entertainment establishments and venues that host large performances. The businesses would provide earplugs to patrons only upon request.

Frey said the city is working with 3M to supply the earplugs at no cost for the affected venues. Multiple hearing advocacy groups approached him to request the change, he said.

Erik Funk, co-owner of the Triple Rock Social Club near the University’s West Bank, said that by implementing the change, the city would be spending energy and money to fix a problem that doesn’t exist. The venue already provides earplugs for less than $1, he said.

First Avenue also currently sells earplugs, and it would suffer a $4,000 loss annually if the ordinance was implemented, Carol Miller, Seville Operations LLC director of operations, said at the meeting.

Frey said the majority of businesses he talked to wouldn’t significantly lose money with the change — and concertgoers would be more likely to use the earplugs if they’re free.

Performers often protect their own ears while they’re playing, he said, so it makes sense to give fans the chance to do the same.

Schlauch said animal research shows that exposure to loud noise causes significant damage to the auditory nerve, which could lead to a decreased ability to distinguish different sounds.

“Providing earplugs at these venues, I think, is an important consideration,” he said at the meeting.

Although there’s no guarantee that patrons will take advantage of the free hearing protection, Boone said he thinks concertgoers should at least have the option.

“They’re there if they want them,” Frey said.

The proposal, which the committee amended Tuesday so the free earplugs would be strong enough to reduce noise but not distort it, is pending approval from the City Council in upcoming weeks. Frey said if the ordinance passes, Minneapolis would be one of the first cities in the nation to offer the amenity.

“All the businesses need to do is take that box of earplugs and not throw them in the trash can,” he said.