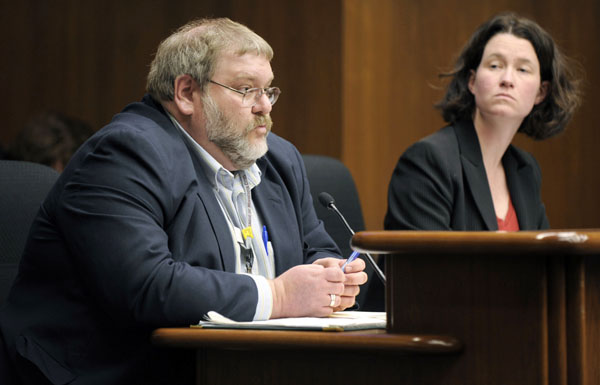 While nearly every state has some sort of constitutional law regarding unallotment, Minnesota is one of a dozen states that gives unchecked gubernatorial power to eliminate expenditures to prevent an anticipated budget deficit.

It is a process that some say gives too much power to the governor and not enough to the Legislature in making budgetary decisions.

Rep. Lyndon Carlson, Sr. (DFL-Crystal) believes the unallotment statute needs to be modernized to bring a budgetary balance of power to the three branches of government. Current law “provides more power than a good governor should want or bad governor should have,” he said.

He sponsors HF2866 that would limit the expenditure amounts the governor can eliminate to no more than 2 percent of General Fund appropriations in a biennium. Also, unallotments could not go beyond 10 percent of any appropriation, and would be limited to any portion of a projected deficit that was not known at the completion of the legislative session.

The governor also could not change eligibility requirements or modify formulas for programs, under the bill. Temporary suspension of payments or deferrals beyond the biennium would also be considered as part of the total sum of unallotment.

Carlson said the change is needed because the LCPFP is made up of both majority and minority parties, unlike the LAC which is comprised of the majority party.

“We would also have a larger membership as a result of that, and also both caucuses would be represented,” he said.

The bill would take effect the day following enactment, so as not to interfere with the current Supreme Court case challenging one of Gov. Tim Pawlenty‘s 2009 unallotments, Carlson added.

Who has the power?

David Schultz, a professor in the Hamline University School of Business, said there are several problems with how unallotment is currently structured.

Consider this scenario: the Legislature decides to fund a program, the governor vetoes it, and the Legislature overrides the veto. The governor could still use unallotment to eliminate the program. Essentially, the current process allows for a second veto by a governor, Schultz said.

Unallotment could also arguably violate the separation of powers clause of the Minnesota Constitution in terms of taking away budgetary powers from the Legislature that it ought to have, while giving wide-open discretion to the governor on what, how and when he wants to unallot, Schultz explained.

“The Legislature needs to take back, and to have for itself, its constitutionally enumerated or delegated powers to be able to assume its responsibilities over the budget,” Schultz said.

‘Special’ power to the people

Carlson also sponsors HF2577 that, upon approval of a constitutional amendment by state voters, would give legislators the authority to call a time-limited special session. Supporters say the change could reduce the gridlock when governing bodies cannot agree because the governor could not use a special session as a bargaining chip as in years past, Carlson said. Only 18 other states have special sessions called by their governor, he noted.

Buesgens called the bill a “knee-jerk reaction” to the continued frustration of legislators over the ending of last session that resulted in Gov. Tim Pawlenty‘s controversial unallotments. “The balance of power we have now has worked very, very well for over 150 years,” he said.

The bill was approved by the government operations committee Feb. 18, and sent to the House Finance Committee. A companion, SF2260, sponsored by Cohen, awaits action by the Senate State and Local Government Operations and Oversight Committee.

Carlson noted other legislators have suggested a total repeal of the governor’s unallotment power, but bond houses actually look more favorably on states that allow for it because it helps guarantee, in a time of fiscal crisis, that adjustments can be made to a budget. Another suggestion was requiring legislative approval for unallotment, but he said that could constitutionally violate the separation of powers.

“This does not fix the situation,” said Rep. Steve Gottwalt (R-St. Cloud). “It doesn’t get us on a path towards figuring out our systemic and continuing budget deficit that is largely the result of too much spending and not enough commitment to right-sizing government.”

Rep. Frank Hornstein (DFL-Mpls) responded, “This is about the responsibility of the executive branch and the legislative branch. We’re gonna have Democratic and Republican governors and maybe third-party governors well into the future, and that’s what this is about.”

The 1939 Legislature first gave unallotment power to the governor, and it has been used a handful of times since.