New University of Minnesota President Eric Kaler (left, with Senior Vice President Robert Jones) toured and visited with the many in-house and partnering University programs at the U’s Urban Research Outreach/Engagement Center Sept. 20, during a Community Day open house. Below: As the day drew to a close, staff and friends danced to the band which kept things lively through the afternoon. (Photos by Margo Ashmore)

University of Minnesota President Eric Kaler’s visit to the Urban Research Outreach/Engagement Center Sept 20 for “Community Day” was just one stop in an inauguration whirlwind week. The day started on a farm and would end with throwing out the first pitch for the Twins.

“Are you going high, or low?” came a voice from the audience. “I’m going right down the middle” and hope not to bounce the ball, he said. That sort of describes his visit to the North Side, less than three months into the job and not taking a stand on fine details, but overall committed to the University being “open, inclusive, to embed in our community.” He said, “this should be a model of engagement with the community and we are doing many of the right things. There’s no great organization that’s not a diverse organization.”

Later, discussing a community benefits agreement that it’s expected community members will draft for review, Kaler stressed that it’s a matter of values, “what does the community value and the University value. A path that’s good for both.” The University is a “research and land grant institution,” given federally controlled land through the states in exchange for benefiting the public. In 1862 when the Morrill Act, the federal land grant law, passed, the idea was to focus on the teaching of practical agriculture, science and engineering, according to Wikipedia. Next year, in the sesquicentennial of the Morrill Act, “that will be re-discussed,” Kaler said, as the University and Minnesota are becoming much more urban and suburban.

Kaler told a media gathering there was no single surprising revelation in his UROC visit, but that he’s always impressed by the intensity and passion the University staff bring to what they do. Cameras clicked away as he chatted intently with various research and program staff and partners throughout the building before and after the introductory remarks.

“He is data driven,” said Robert Jones, Senior Vice President for System Academic Administration, whom UROC is under. “He will want results.” UROC, 2001 Plymouth Ave. N., houses several research and outreach programs around community and economic development, health and well-being, and education. The building includes a kitchen for healthy cooking demonstrations, a center for small business assistance, art gallery space in the lobby, and various meeting rooms.

UROC Executive Director Heidi Barajas said 20,000 people have come through UROC since its opening about two years ago, and 500 groups have used the facility for meetings this year. Her passion, which she noted Kaler supports, is “opening pathways to post-secondary education” for a diverse population.

The University president promised, with several Minneapolis Public Schools staff in the room, “you will see my dedication that public schools work effectively” to close the achievement gap for children of low income families and of color. “If we don’t close the gap and contribute to the global economy, my children and grandchildren” won’t have a good future.

Kaler sat with his wife, Karen, at the proceedings. With a full house in UROC’s biggest room they viewed a rough-cut segment from a University-sponsored documentary on places in North Minneapolis history that producer Daniel Bergin is “a few weeks away from finishing.” It should launch in November. Bergin explained that it’s very much about the present and future, referencing the past.

The segment, about Sumner Library, included a story that Kaler mentioned later in talking about arts as “hugely beneficial.” In it, George Roberts tells of a young person involved in making the “sedimentation” woodwork with him and Seitu Jones. When families came to opening day, the young man’s mother was impressed. He said, “you see, mom, I am worth something.”

As Kaler departed for his next stop, the Guthrie, Northsiders lined up to videotape personal stories of their favorite Northside places. For information on “what goes on there” at UROC day to day, visit the new website, uroc.umn.edu or call 612-626-8762. 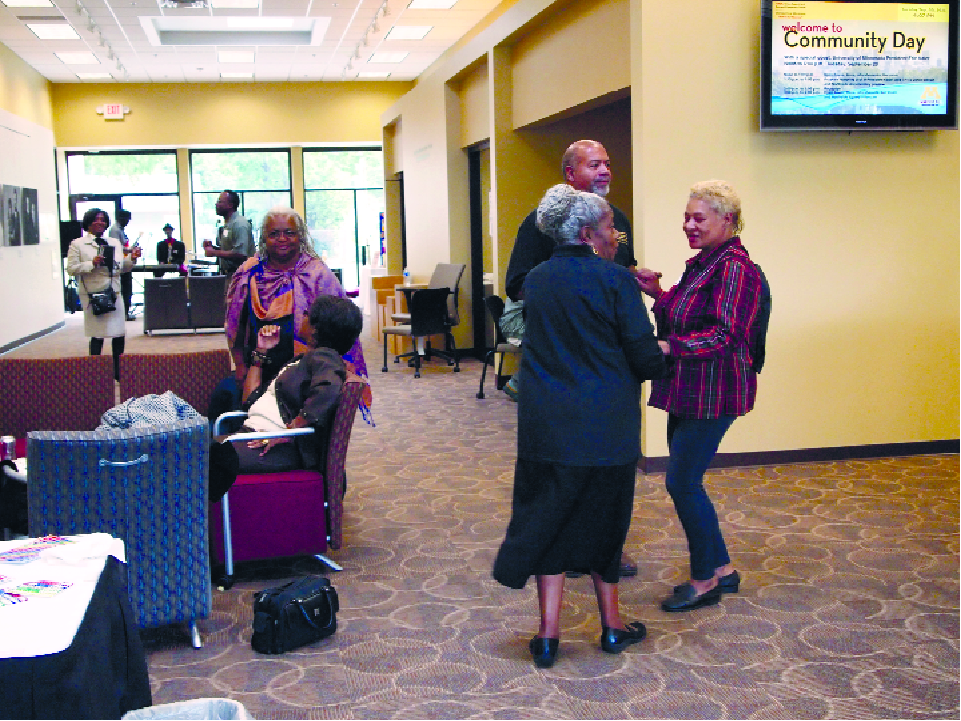