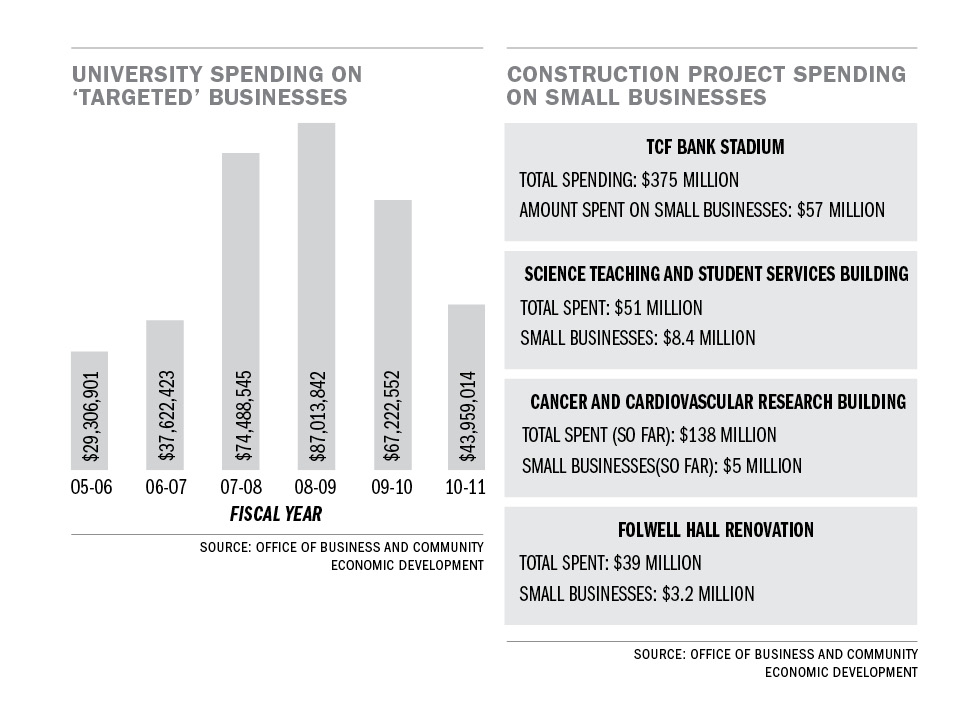 In an effort to boost the state economy, the University of Minnesota looks to small, local businesses to provide goods and services.

The University spent $66 million on goods and services from local businesses in the 2010-11 fiscal year, according to the Office for Business and Community Economic Development.

About $44 million was spent on “targeted businesses,” or businesses owned by women, minorities or the disabled.

In the past 12 years, Craig Taylor, the office’s director, estimated that more than $750 million went to small businesses in the state.

By using local businesses instead of outsourcing, the money the University spends on capital projects circulates back into the state, boosting the local economy, Aron Khoury, a project manager for University suppliers within the office, said.

“It’s an economic development strategy,” Taylor said. “It has a tremendous impact on many of these companies — it allows us to support our tax base and create jobs.”

Sharon Banks, the project manager for construction projects, said the contractors the University uses to construct new buildings around campus are highly supportive of the program’s requirements.

Small and targeted businesses put out competitive bids for projects, ensuring that the University gets a good deal on goods and services, Khoury said.

The Office for Business and Community Economic Development identifies small businesses the University could use from janitorial services to office supplies. They also require any capital project more than $100,000, like constructing a new building or remodeling, to include a percentage of small businesses.

Regular progress reports are sent  to the office to ensure that workers and businesses are actually used by contractors and paid appropriately, Banks said.

The office also maintains a database of more than 1,000 businesses the University has used when the University begins a new capital project or requests a service, Khoury said.

During the $375 million TCF Bank Stadium construction — one of the largest at the University in decades — more than $57 million went to small or targeted businesses.

Rock On Trucks, owned by Krystal Vierkant and based out of St. Cloud, Minn., was employed by the University during construction of the stadium, the demolition of the Tandem Accelerator building in 2010 and the current construction of the Cancer and Cardiovascular Research Building in the Biomedical Discovery District.

Vierkant said that while the University wasn’t her largest account, she appreciated the opportunity to work for the school, and the office’s effort to work with locally owned businesses.

Covenant Electric, a woman- and minority-owned business, has completed five projects on campus, including the renovation of Folwell Hall and the construction at the Nolte Center. Barbara Graydon, the owner of the company, said she appreciates the targeted business program in an industry still suffering from an uneven playing field.

“In spite of some significant social and cultural changes, and in spite of the fact that more than 50 percent of students are women, many people still exhibit behaviors and attitudes that prevent women — and other targeted groups — from reaching their full potential,” Peg Lonnquist, the director of the Women’s Center at the University, wrote in an email.

The office also requires a percentage of workers in each capital project to be from “protected classes,” encompassing women, minorities or disabled.

The requirement has created job opportunities for more than 2,000 residents of Minnesota, Taylor said. And during the TCF Bank Stadium construction, more than 22 percent of workers on the project were from protected classes, he said.

Taylor said that by seeking out small businesses the office isn’t simply looking to fulfill a one-time need for the University, but to build long-term associations with local business-owners.

“These companies are interested in a relationship, and they approach us with that intent,” Banks said.

Covenant Electric is currently in a mentor-protégé relationship with a larger electric company, but hopes to begin taking on their own projects soon, said Eddie Graydon, the vice president of the company. The Graydons hope to have a continued relationship with the University.