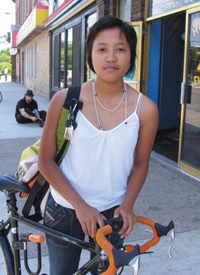 Meizani Irmadhiany is only happy when she’s busy. In her three years at the University of Minnesota, the 20-year-old from Jakarta, Indonesia, has done a lot more than homework for her double major in political science and global studies. She works part time at the school’s Human Rights Center and volunteers at the Center for Victims of Torture. Last summer, she traveled to Indonesia’s Aceh province on a humanitarian mission. This summer and fall, she said, she’ll take it easy.

As co-worker Patrick Finnegan points out, Irmadhiany (EER-mahd-ya-nee) has a different definition than most of “taking it easy.” She considers having time to focus on an internship and take art classes to fulfill graduation requirements a kind of “harvesting” of the hard work she’s done the last few years.

She’ll take time out to ponder what she wants to do after next spring’s graduation. She’ll combine a trip back home for a friend’s wedding with a return to Aceh province, the tsunami-battered region where she served her fellowship. Irmadhiyani is into balance: idealism and realism, work and enjoyment. She’ll continue her work at the Human Rights Center and is translating a documentary about the 2004 tsunami for Mercy Corp, the Science Museum of Minnesota and the North Carolina Museum of Natural Sciences. But when asked what she does to relax, she said, “I’m relaxed right now.” Almost everywhere she goes, she goes on a bike.

A life of questions
Irmadhiany’s passion for human rights is clear, but she doesn’t take herself too seriously —“I’m going to save the world, one country at a time,” she said with a laugh. Her childhood in Indonesia sparked her passion. Her father was an activist who worked to unseat the corrupt dictator Suharto, who ruled Indonesia for three decades until 1998. She talks about both her parents with great admiration. In a culture where “advancement is mostly for boys,” they treated their son and their two daughters as equals.

Along with her country, her family endured financial ups and downs, and she remembers as a child asking her father, “Why are people poor?” When she grew older, she wondered why a country so rich in natural resources constantly walked on eggshells to please foreign investors, the International Monetary Fund and the World Bank.

Irmadhiany’s advocacy on behalf of others began early. Her father, Alhilal Hamdi, now commissioner of Indonesia’s state-run energy company and an advocate for alternative fuels, recalled a story from her childhood. When a girl in her school couldn’t afford to attend school (public schools are not free in Indonesia), Irmadhiany gathered her friends each month to raise money for the girl’s tuition, Hamdi said via e-mail.

Just before Irmadhiany’s eighth birthday, she traveled with her family to the United States. She remembers that as she entered the Honolulu airport, she said to herself, “I’m going to live here someday.” She was impressed with how developed and modern things were compared with her home.

At 18, Irmadhiany still wanted to come to America, but for a different reason: education. In Indonesia, hierarchy is paramount, and teachers don’t like to be questioned. That’s not Irmadhiany’s style, so she came to the University of Minnesota to get a liberal education in a place where she could debate her professors. She said getting a visa was relatively easy for her, even though many Indonesian students were dissuaded by the U.S.’s strict security measures enacted after 9/11. She said she got in because, “basically, I’m a girl.”

Although she defies the stereotype of a college student who just wants to party, Irmadhiany has made a lot of friends in Minnesota. She doesn’t begrudge people who aren’t trying to save the world. “I have friends who don’t care about social issues,” she said. “It’s fun to appreciate things I don’t normally. Maybe it’s generating more capital. Maybe it’s partying.”

Rights aren’t universal
When most Americans think of human rights, words like “inalienable” and “universal” might come to mind. As someone who’s passionate about social justice, Irmadhiany sees how, far from being inherent, human rights only exist if people work for them.

“It’s a social contract, a framework for change. Do you want to live in a world where you can get tortured? Do you feel safe when you know that somewhere in the world, someone is being killed for the color of their skin?” she said.

Human rights, she said, are not the same all over the world. “Different rights are pushed in different societies at different times,” she said. “People have different interests for what they want their communities to be.” For instance, in the United States, Irmadhiany sees individualism as one of the most important values. Back home, she said, the culture is more community-based. Human rights workers need to be sensitive to those kinds of cultural values if they want to help a community change.

It’s something she learned firsthand when she traveled to Aceh last summer to help with tsunami recovery as an Upper Midwest Human Rights fellow. She couldn’t completely understand the Acehnese dialect, which is different than the national language she grew up with, and that made it hard to interpret details. She wrote in her blog about trying to connect tsunami victims with psychological help “when one could not even understand what the others are truly feeling. It was just absolutely frustrating. … It was made clear that one could not reach another in a deeper sense, when one does not speak and understand the other culture.”

Irmadhiany did her best to become a bridge between Indonesian aid workers and those from the West. Word got around that she could translate, and soon she found herself called on to interpret in a meeting with representatives from the Indonesian government, various United Nations bodies and local and international nongovernment organizations. Her blog entry from that day captures the excitement she felt:

“It was nerve-wracking; I remembered the extreme sweating and the fast heartbeat filled my emotions.

“… It was all that I dreamt about. All the politics, the looks in people’s faces whenever a certain other organization makes unreasonable comments. … These people or their organizations have been in the area since the tsunami hit. I saw hope, big thoughts, but also I saw frustration and fear of the unknown. … The hardest part was trying to learn about their work and be[ing] super interested while switching languages and speaking in front of a group of professional humanitarian workers. They talked about the problem of psychosocial state, mental health, education, and lots of other stuff. … They all wanted me back for the next meeting.”

Compelling, but dangerous
Activism in Indonesia can be a high-stakes field, and as she considers returning home to work, Irmadhiany is aware of the dangers. “Back home, it’s not safe” for social justice workers, she said.

She relates the stories of Munir Said Thalib, an Indonesian and one of the most famous human rights activists in Asia. Munir was assassinated in 2004 at age 38 in what many believe was a government conspiracy stemming from his anti-corruption work. Judges are targets too: Supreme Court Judge Syafiuddin Kartasasmita, who helped convict the favorite son of former dictator Suharto on corruption charges, was then murdered by the son’s hit man.

In spite of the dangers of corruption, relative instability and natural disasters—there are acquaintances Irmadhiany hasn’t heard from since the May 27 earthquake—she wants to work in Indonesia. “I want to be there if something happens,” she said.

As her senior year approaches, Irmadhiany’s not exactly sure what she’ll do after graduation but wants freedom to explore through her work. “I see myself like my dad. He has all these jobs,” she said. “I want to work in a big NGO. I want to work in the UN. I want to work in [a] grassroots organization.” She also guesses she’ll probably run for elected office in her home country.

Irmadhiany’s father has been an activist since before she was born; he was arrested in college for his opposition to Suharto. She remembers a particularly busy period for him just after the resignation of the dictator. An eighth-grader, she was attending a student government retreat when the TV news announced that Indonesia’s new president had appointed her dad Secretary of Labor and Transmigration. Irmadhiany returned to a house suddenly filled with flowers and well-wishers, and soon formed a skeptical eye for corruption and a cynicism for “how fake people can be,” she said. “My dad told me, ‘Don’t let any of the people know what you want, what kind of inanimate objects you want. Because they’ll buy it for you, and that would be corruption.’”

Irmadhiany grew up in a Muslim family in a country with the biggest Muslim population in the world. She fasts during Ramadan and practices prayer, and said many of the values she was raised with are the same ones that draw her to humanitarian work. She cites stories in the Koran about Muhammad that illustrate patience and perseverance in the face of hatred. She said she keeps the golden rule in mind.

Although her journey to Minnesota ultimately will serve her in her struggles against injustice, Irmadhiany feels her birth country drawing her back, and said sometimes it’s hard to be at school in Minneapolis when so much is going on back home. “I have a lot of guilt. I have a lot of privilege to be able to come here.”