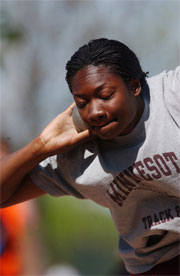 Sprints and hurdles events too often overshadow field activities, such as shot put, hammer and discus, that aren’t as pretty. “They are not the glitz events,” admits Gary Wilson, the longtime University of Minnesota women’s track coach, of the field competitions that tend to get second billing.

This might explain why Elizabeth Alabi’s school record-breaking hammer throw of 196-10 earlier this spring didn’t get much press. The Brooklyn Park junior’s throw at the April 7-8 Georgia Invitational broke Beth Howard’s mark set in 2000 by over two inches.

“It was tremendous,” marveled Wilson.

Alabi credits a couple of things, including taking last season off rehabbing after knee surgery, for her on-field success this year. “I think, with the year off, I was able more to focus on technique and not worry about having to compete,” she explains on switching to a three-turn throwing method. “My coaches always wanted me to do three turns. Technically speaking, I was a better two-turn. When you are going so fast from two to three, there’s more room for you to mess up.”

Momentum is also important. “The faster you can get the hammer, the farther it is going to go,” Alabi points out.

More important than mechanics, an inner peace and a stronger faith have played key roles, Alabi adds. “I always knew that something was missing, but I just didn’t know how to attain it,” she says humbly. “I always strived to have a strong faith. I was going to church but wasn’t understanding anything.”

After attending a faith-renewing meeting, Alabi was reborn. “Now I go to a church that I love to go to. I really have been able to transfer Christianity to athletics.”

“She’s got wonderful parents; she’s a very bright kid and one of the nicest kids,” says Wilson of Alabi.

Now armed with a stronger faith and a knee growing ever stronger as well, Alabi has picked up where she left off two seasons ago, when she threw a career-best 50-2 in the shot put, good for third in the Big Ten indoor championships. Despite another career-best of 50-7, she finished fifth in the NCAA Outdoor Regional. She’s placed first twice and second once in three events that qualify her for the NCAAs later this month.

Qualifying in the hammer is even more remarkable considering that Alabi didn’t start throwing one until she arrived at college. “She was a novice who didn’t know a hammer from a nail,” joked Wilson. “She’s gone from zero experience to now being the school record-holder in relatively short time.”

Wilson says most U.S. high schools won’t allow hammer events because of its dangers. “I’ve seen two people killed with the hammer,” he notes, which explains why the United States often doesn’t place well in international competition. “You are really starting with novices [in college] when they are 18 years old, and if they stick with it for 10 or 12 years, they can really, really be good.”

Alabi must also become more than a fair-weather thrower, Wilson believes: “She’s had two meets in the rain this year and hasn’t done too well. Technically, I think she still has some things to work on.”

“I am still working on the shot,” admits the physiology major, whose future goals include becoming an obstetrician.

Her faith has given her a confidence boost that she has applied in every facet of her life on and off the field. “I know if I’m supposed to be a doctor and I do my part and work hard, everything else is going to fall into place.” Her long-term goal, Alabi concludes, is “to be strong in my faith and be happy. Hopefully, [to] get married and have kids.”

Using data from the class of 2003, the report, released last month, also shows that 59 percent of Black females graduated from high school, compared to only 48 percent of Black males earning a diploma. See the entire report on www.manhattan-institute.org.

Violet Palmer recently became the first woman to referee an NBA playoff game, calling game two of the Indiana-New Jersey first-round series. She is the only female and the only Black female official in the NBA.

Despite a four-percent increase for both prizes, Wimbledon still remains the only Grand Slam tennis tournament with unequal prizes for men and women. Officials claim that it’s fair to pay the men’s champion ($1.170 million to the winner) more than the women’s ($1.117 million).

Stanford University will host a one-day conference, “Work, Family, Excellence, and the Female Coach,” on May 30. Expect among the issues discussed to be the percentage of female NCAA Division I head coaches (just under 44 percent), which is at its lowest level in 30 years — a topic for a future “Another View” column.