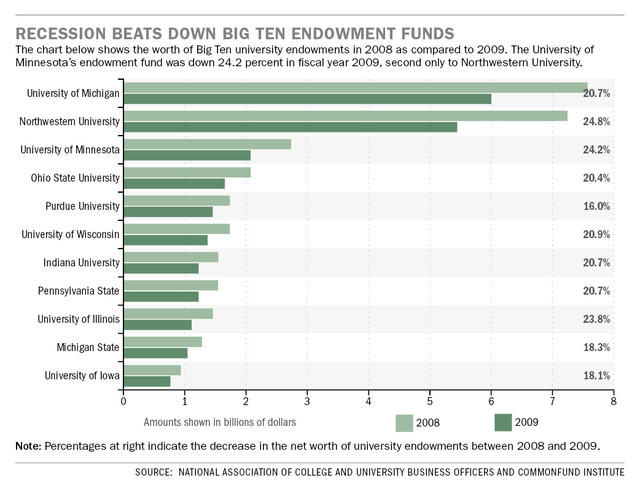 The recent economic recession has bruised endowment funds at nearly every college and university throughout the United States, and the University of Minnesota is no exception.

Prior to the recession, the University’s endowments – a bundle of investments handled by outside managers but overseen by the University – were valued at $2.8 billion. The fund hit the hardest, the Consolidated Endowment Fund, accounted for $1.1 billion of that money.

While the University hunkered down for a fiscal storm and withdrew its stocks, the market rebounded, leaving other universities with large bounce-backs following the initial drops of October 2008.

“This was a perfect storm of bad circumstances,” Stuart Mason, the University’s chief investment officer, said.

Once the economy started to crumble in 2008, managers of the CEF altered the fund’s makeup to reduce its exposure to the volatile stock market and ensure the University had enough available money to fulfill investment promises that may be asked for at any time.

This meant moving away from its normal CEF distribution, which is spelled out in regent policy.

Most notably, University investors decided to take money out of the stock market, which typically makes up between 35 to 45 percent of the fund, and invest it in safer areas like bonds.

Public equity, or stocks, now makes up about 17 percent of the fund.

That shift, however, could not save the University from the effects of the recession.

“We maybe didn’t get back in as fast as we would’ve liked right now, as the market was going up again,” Board of Regents Chairman Clyde Allen said. “But, we did not fall as low as we might have.”

But not all of CEF’s losses came in the form of poor investment performances. Endowments are designed to be large pools of money that gain interest, so annually the University can skim money, 4.5 percent of the CEF, to help provide scholarships and resources and hire faculty.

Overall, the University’s endowments were down 24.2 percent during fiscal year 2009. By contrast, the average endowment lost 18.7, according to the National Association of College and University Business Officers and Commonfund Institute.

While the University of Minnesota lost more than nearly all other Big Ten universities, it fared better than Northwestern and other large, private institutions.

“Those were the smart guys, I mean the really smart guys,” Mason said, referring to Ivy League investment officers whose funds lost as much as 29.8 percent.

Harvard, Yale and Stanford, for example, lost an average of 28.7 percent of their endowments, which fund a much higher percentage of overall costs.

Harvard cited its endowment fund as the reason 275 employees were laid off in June of 2009.

In addition to the volatility of the stock market, the other major blow to the University’s endowment was the 10 percent it invested in real estate, including office buildings, storage facilities, student housing, condos and hotels.

These investments are not easily traded and could not be moved when the economy slumped.

“The one piece that’s really disappointing to everyone is the poor performance of the real estate portfolio,” Mason said. “The real estate underperformed any benchmark we would set for it.”

While the University’s losses were in line with those of institutions during this period, it will likely be behind them when fiscal year 2010 numbers come out because of the actions taken this year, Mason said.

After the University took money out of the stock market, the market began to trend upward. As a result, many universities will see endowment gains around 12 percent, while the University’s endowments are expected to grow by 6 percent.

Currently, the University is putting money back into the stock market.

“Generally, I feel good about getting back into the equities market over the next few months,” said Allen. “I think it’s not entirely safe yet, but I do think it’s going to move up.”

Allen said, however, that the timing of a move back into the market is left up to the “professionals.”

Already the portion of the portfolio invested in stocks has increased from 17 percent to about 21 percent, and in coming months, that number will approach the bottom of the school’s target range of 35 to 45 percent.

“We are optimistic,” Mason said. “We’re happy with the way we are positioned and think that the way the portfolio is set up that we’re set to receive good returns in future years.”