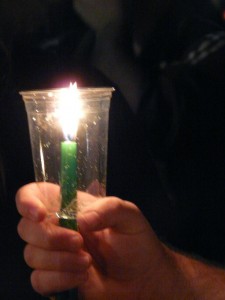 At the University of Minnesota on a windy Tuesday night that kept candle-lighters busy, about 400 students gathered to speak out against bullying, and to share their stories of bullying during an open mic following a moment of silence.

“I want you to know that your student body government has joined you in this fight for equality,” said undergraduate student body president Sarah Shook. She said the she stands in solidarity with Michigan State University student body president Chris Armstrong who has been a target of a harassment campaign by Michigan’s assistant attorney general Andrew Shirvell.

“We must do more and we must do it soon. I can’t do it alone. Please get involved in the Minnesota Student Association and help us understand what we can do to protect gay, lesbian, bisexual and transgender students on our campus and all over the country. As we are learning tonight, the cost of doing nothing is unbearable. Thank you for your strength and courage,” added Shook.

Tammy Aaberg, mother of Justin Aaberg, a gay student at Anoka-Henepin who took his own life in July, addressed the vigil at the University.

“We are here tonight for all these victims of bullying, all of these young people who have been bullied to the point of making the desperate decision to take their own life. We stand here tonight to say no more,” she said.

“I want to let you all know that there is hope. If you are bullied for any reason please, please tell someone.”

In Loring Park on Thursday, about a thousand people gathered with a similar message: end bullying. Sen. Scott Dibble, and Reps. Jim Davnie and Frank Hornstein took the stage to rally support for the Safe Schools for All bill which they said would be filed during an upcoming special session. Faith leaders also took to the stage to point out that not all faiths discriminate against LGBT people.

The Rev. Dr. Robyn Provis, who lost a bisexual son to suicide, related he own experiences and called for an end to bullying. “It has got to stop,” she said, “because bullying doesn’t happen in a vacuum. The children who are doing this bullying have been taught this kind of hate.”

She continued, “You will find anti-gay religious bias and ignorance every time. You will find families teaching that it is not okay to be different. God doesn’t bully. The god that I serve, that I know loves every one of us without exception.”

She’s created a website for those who have suffered from bullying at www.getmethroughthenight.com

Community member Kendrick Davies said, “Dan Savage was wise when he launched his “It Gets Better Campaign. Of course it gets better on the other side of graduation or emancipation from parents.”

“I’m here today,” he said, “because I am very interested in making it get better sooner, like today.”