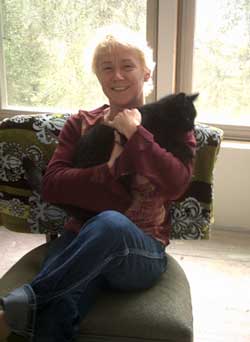 Carolyn Phillips, 46, got out of an abusive relationship as a teen. Photo by Elise Purkapile

When 17-year-old Carolyn Phillips, now 46, of Minneapolis, brought her new 19-year-old boyfriend, Rick, to meet her parents, he was charming and sweet. Carolyn’s mom was especially charmed by Rick. So when he started being abusive they were on his side.

“He would even take my mom out to breakfast every Saturday,” Carolyn said.

After about six months of dating, Rick started to get abusive. He didn’t start out hitting Carolyn. He punched walls and threw things and told Carolyn this was what she would get if she didn’t do exactly what he wanted.

Carolyn’s past relationship is unfortunately not unique. Approximately 1 in 5 female high school students reports being physically and/or sexually abused by a dating partner, according to a 2001 study published in the Journal of the American Medical Association.

Barton Erickson, the coordinator of a local education program for teens on dating violence – Cornerstone’s Preventing Abuse and Violence Education – says there are signs that point to a relationship being abusive.

For more information about dating violence and how to get help, visit Cornerstone’s web site.

When Rick would hit or throw things, he was trying to intimidate Carolyn, which is one of the signs of dating violence, according to Erickson.

Rick would curse at Carolyn and call her names, which is verbal abuse, another sign of dating violence. At first Carolyn would think that he was saying these things because he was having a bad day.

Eventually the cursing and calling names turned into humiliating her in public. When Carolyn would go shopping and try on clothes and model them for Rick he would tell her she looked disgusting. Soon Carolyn caught on to the fact that he would only humiliate her when others were around. This would an example of emotional abuse. That’s when your partner makes you feel bad about yourself, Erickson said.

Laura Melzarek, 19, a student at the University of Minnesota. Like Carolyn, her boyfriend also verbally abused her. He would use profanity, yell at her, call her names and make her feel worthless. This eventually made her feel so bad that she did not know who she was anymore, Laura said.

Laura’s boyfriend would only let her hang out with girls because he didn’t trust her. When she got back from wherever she was, he would always interrogate her. When your partner always wants to know where you are or who you are with and tries to control who you hang out with, this isolates you, Erickson said, another sign of dating violence.

Carolyn was also restricted to hanging out only with girls who were also abused, “his friends’ girls,” she said. “Anything or anyone that was a threat to his power was not allowed.”

The violence in Carolyn’s relationship escalated. Her boyfriend would burn her with cigarettes, hit her, and even tried to run her over with a car. This is physical abuse and Carolyn recognized this right away. Soon after the physical abuse started, Carolyn moved far away. She actually had to abandon her apartment to get away from Rick.

Being in a violent relationship can have a lasting impact on you. For Laura, she says that blocking people off from her real feelings is easier than letting them in and letting herself get hurt. Laura puts up an emotional wall around guys.

Like Laura, after the abuse that Carolyn suffered, she hated men. But she received therapy at the Domestic Abuse Project of Minnesota for many, many years. Her opinion on men has changed and she now “loves ’em,” Carolyn said.

Laura’s advice to girls is that there is help through counseling and hotlines that everyone can receive. If you think you are in an abusive relationship and need help, check out Barton Erickson’s recommendations for how to get out of your relationship.

“When someone starts to abuse you verbally that is when you should make a note that this could get worse, notice things like this before it gets to late,” Carolyn said.