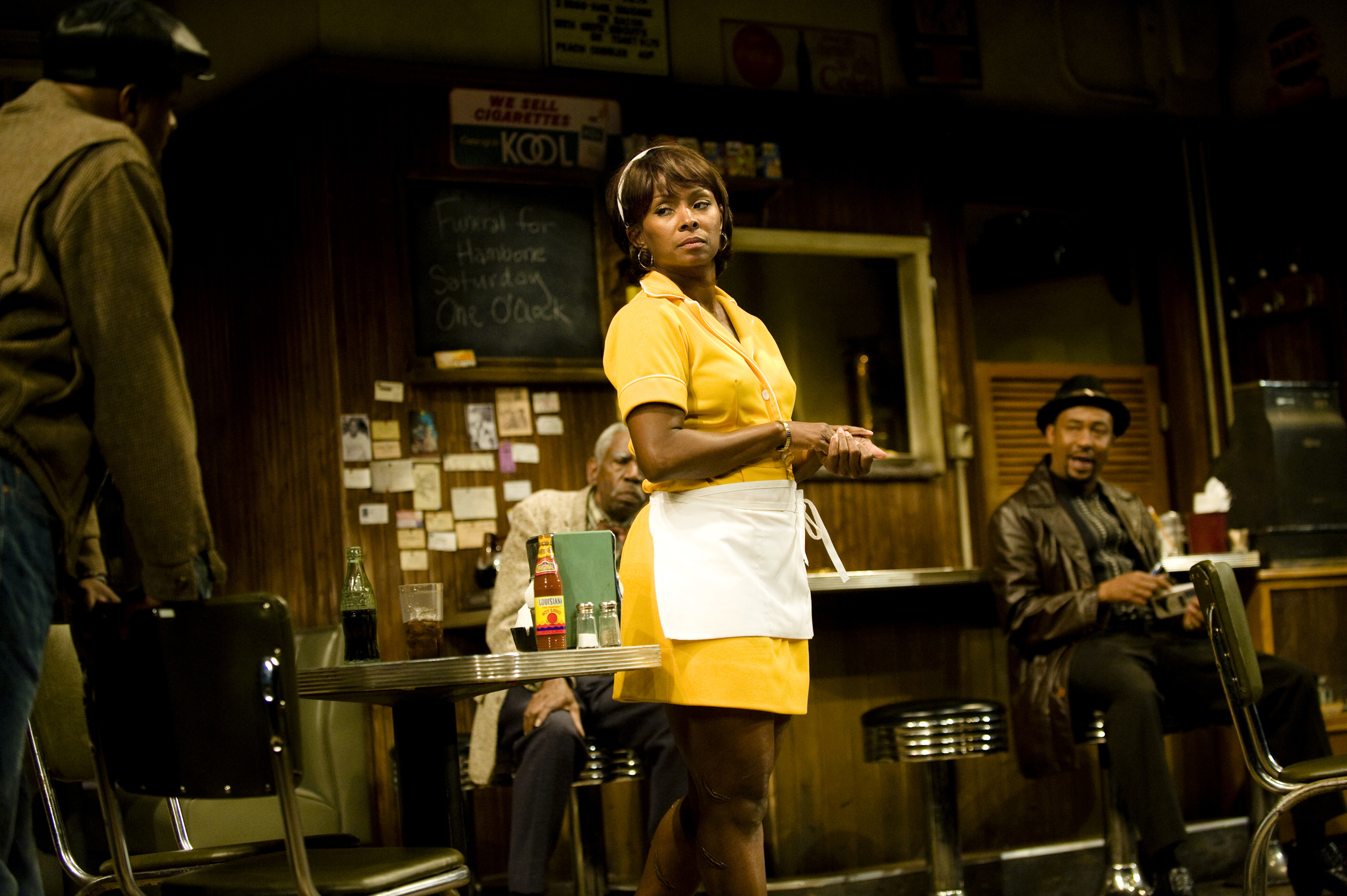 The person who accompanied me to the performance of Two Trains Running said that this August Wilson script is one of her favorite plays, so much so that it inspired her to write more plays of her own. It’s easy to see why. Penumbra Theatre’s production of Two Trains Running is the kind of theater that renews your faith in the power of words put in the hands of great actors to do amazing things. Penumbra is once again at the top of their game here, working with a playwright at the top of his game. Artistic Director Lou Bellamy and his team put on a hell of a show. I can’t recommend it highly enough—solid, powerful, entertaining theater from start to finish. It’s one of the better examples I’ve seen lately of that special magic that only live performance can offer an audience (and where an audience can offer up support to the performers in return).

“Death’s gonna find you.  But you’ve got to find love on your own.”

On the surface, Two Trains Running is deceptively simple. It swiftly covers six days in the life of a Pittsburgh diner in a rundown neighborhood in 1969, and the employees and regular customers who come and go. The major societal upheavals of the 1960s seem to be going on far away from this little diner—or at the very least down the street and out of sight. But the longer you spend in the company of these characters, the more you realize that there are some major revolutions of a personal kind going on just under the surface of their thick skins.

“You’re born free.  It’s up to you to maintain.  Freedom is heavy.”

The owner of the diner, Memphis (James Craven), is wrangling with the city which wants to buy him out so they can redevelop the area. But the city is trying to lowball Memphis on the sale, and even though the odds are stacked against him, he’s sticking to his original asking price.

“I done buried a whole lot of people.  She’s the only one I wondered about.”

Meanwhile, the business of the diner goes on as usual. Risa (Crystal Fox), the beautiful waitress carrying around scars both physical and emotional, sets the pace of the diner (and indeed the production) with the steady but unhurried tread of her heels. She is a woman of few words, and fewer facial expressions. This means, of course, that a subtle eye-roll, or a half-smile, speaks volumes. (One of the many reasons you can’t take your eyes off of her.)

“To get to my house I had to walk through fire.”

“Jesus Christ didn’t get justice.  What makes you think you’re gonna get it?”

Wolf (Kevin D. West) runs his numbers game largely from the diner’s pay phone, much to Memphis’ consternation. Another thorn in Memphis’s side is Hambone (Ahanti Young), a mentally challenged fellow insistent on his own quest, to claim the ham which he feels is rightfully owed him by the grocer down the block.

The only well-to-do member of the crowd is West (Dennis W. Spears), the neighborhood undertaker, currently struggling with the funeral arrangements for a popular preacher, whose followers continue to balloon in numbers since his death, complicating the timetable for getting the good reverend in the ground.

“More people dying than being saved.”

Rounding out the diner’s band of regulars is the ever-present Holloway (Abdul Salaam El Razzac), a charismatic old gentleman who shares many stories, but holds back just as many secrets.

“I’m 65 years old.  I got that way by not messing in other people’s business.”

These people become a strange sort of family, as any tight-knit community will.  Being family doesn’t mean you always get along, far from it. But adversity pulls these people together, rather than apart. Their victories, large and small, are shared (and over the course of the evening, the audience becomes a part of that family, sharing in the highs and lows as well).

“It’s like trying to haul sand in a bucket with a hole in the bottom.”

A writing friend of mine back in grad school once strove to emulate August Wilson’s style, but watching this production of Two Trains Running, I understand now that he misunderstood the formula. He thought on some level it was all about giving a large ensemble of characters one monologue after another about bigotry and oppression. The standard notion of a monologue isn’t enough to contain Wilson’s speeches for his characters. These are stories, told by complex people who know how to tell a story—with humor, with poetry, with honest detail about human existence in all its absurdity and horror.

“They’ve been ‘going to tear down this block’ for 20 years now.”

The real possibility of losing is always in the air. So is the possibility of violence. The small achievements of simple survival become grand milestones.

Grand as well, yet again, is the design for this latest installment of Wilson’s century cycle at Penumbra. Once more the set seems to defy the laws of physics. The Penumbra space doesn’t literally go on forever in all directions, but set designer Vicki Smith’s cross section of the diner and the alleyways beyond provide the actors with so much playing space that it seems as if Penumbra’s back corner is simply opening onto the outside world—50 years ago, trading night for day. Plus, the stage juts out toward the audience with only the flimsiest nod to a fourth wall, allowing some spectators to feel as if they’re right there in the diner with the acting ensemble.

Michelle Habeck’s lighting design reinforces Wilson’s flare for theatricality. In addition to providing realistic illumination keyed to the story’s time of day from scene to scene, the end of each scene finds the lights focusing down to a bright white pool. Such moments spotlight a key character and bit of dialogue, right before the scene resolves and fades to black. Scene shifts allow for a feeling of the passage of time, eased along by Martin Gwinup’s sound design incorporating R&B classics from the past (many times members of the audience couldn’t resist singing along).

“Love’s got a price.  Most people ain’t willing to pay it.”

See this thing. It’s one of the richest theatrical experiences I’ve had all year (and I’ve seen, and participated in, a lot of theater this year). Penumbra’s brand of theater gives theater a good name.