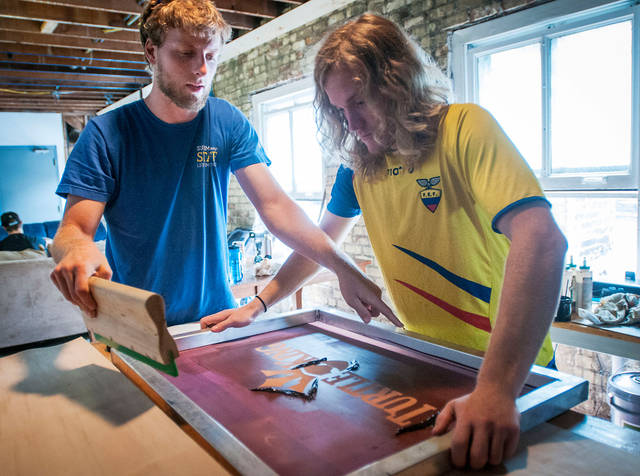 Bioproduct marketing and management junior Drew Swanson, left, and global studies senior Phil Kelly prepare to silk screen their logo onto a board at TurtleKing Workshop Friday, April 26, 2013, in Minneapolis. The TurtleKing co-founders have partnered with the Cedar-Riverside Youth Council and the Minneapolis STEP-UP program to teach local youth how to design, build and sell longboards. (Photo by Emily Dunker)

Above an old jewelry store near the University of Minnesota, two college students work to perfect their custom longboards—but boards are only part of the business.

Drew Swanson and Phillip Kelly, co-founders of TurtleKing Longboards, are hoping to build their skills as young business owners while also bridging the gap between the University and the Cedar-Riverside neighborhood, where they opened shop last week.

Now that they have a physical location to supplement online sales, Swanson and Kelly have started an internship and set up a youth program for middle and high school students in the area.

Combining their passions for longboarding and community engagement into a small business has been the dream of Swanson and Kelly for the last two years, said global studies senior Kelly.

Their business venture began in 2011, when they applied for a $2,000 Purpose AND Profit grant from the Gary S. Holmes Center for Entrepreneurship in the Carlson School of Management, which they received in fall 2012. Shortly after, they were awarded $500 by the 2013 Acara Challenge, an Institute on the Environment student program and competition.

Swanson and Kelly’s business plan “encouraged an active lifestyle on and around campus,” said John Stavig, director of the entrepreneurship center.

Although creating a sustainable transportation alternative is an important part of their business, Kelly said, they wanted to focus on addressing the “disconnect” between the University and the Cedar-Riverside area.

“There’s a missed interaction,” Kelly said, “but there’s a lot of potential.”

For their first step, Swanson and Kelly started a program with the Cedar Riverside Youth Council where middle and high school students in the neighborhood can do hands-on work at their shop.

“Their commitment to the youth in the community is a good step toward mending the disconnection,” said Mohamed Jama , the council’s general director.

The Youth Council is currently recruiting kids, and they plan to have five to 10 program participants in July.

At the shop, students will learn how to make longboards and eventually get to build their own to keep, said Swanson, a bioproducts, marketing and management junior .

Through the Youth Council, Swanson and Kelly learned of the city’s STEP-UP internship program that pairs youth with local businesses.

Suad Yusuf, 16, who lives down the street from TurtleKing Longboards, joined the STEP-UP program to build her resume for college applications. She started interning at the shop Monday.

Although she was apprehensive to ride the longboards, Yusuf wants to design her own board this summer.

Swanson said they want to create a work atmosphere that’s “beyond longboarding,” where the kids can share their ideas and contribute to the business.

Kelly and Swanson are also hoping to start a weekly longboard ride in Minneapolis this summer. Their goal is to establish the business and make enough money to keep the space before they go back to school in the fall.

“We’re both big dreamers,” Kelly said, “but we like to act on those dreams.”