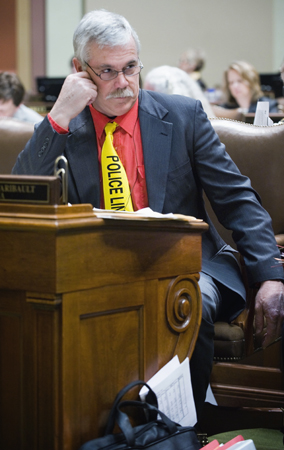 The House passed a two-for-one public safety and judiciary omnibus bill March 31 along party lines after discussion where the DFL categorized the proposed cuts as “extreme,” but Republicans termed them necessary “tough choices.”

The House voted 71-59 March 31 to approve HF440/ SF958*, which includes $728 million for judicial system and support services and $1.2 billion for public safety and corrections. The bill as amended now returns to the Senate. A conference committee is expected to work out the differences.

One day earlier, the House Ways and Means Committee incorporated the omnibus public safety and judiciary finance bills into the Senate’s combined version. The Senate passed its omnibus bill for public safety and courts funding 36-28 March 29.

DFL members who lined up against the House bill criticized its inclusion of what they called “substantial” reductions to the Department of Human Rights and Civil Legal Services along with other public safety and Department of Corrections spending. They also criticized the transfer of $8.5 million from the Fire Safety Account to the General Fund.

House Majority Leader Matt Dean (R-Dellwood) countered that the bill looks at protecting the courts and public safety in the context of tough budget targets. “Sometimes you have to live within your means. Sometimes that means making tough choices and moving ahead. That’s what this bill does.”

Rep. John Lesch (DFL-St. Paul) said the legislation represents a “stinky, ugly foot that we are trying to shoehorn into this shoe that don’t fit because of the budget targets” the majority put in place.

The bill’s language outlines a 65 percent funding reduction for the Department of Human Rights, which amounts to a

Rep. Carlos Mariani (DFL-St. Paul) said the proposed reduction “eviscerates” the Department of Human Rights budget, which he said would have “very real negative impacts on our communities of color in the state of Minnesota.”

“It’s pretty clear what the values are before us, members,” he said. “Our GOP majority today believes that what Minnesota values in terms of our value of human rights are not important and are not a priority.”

“To say that I don’t care about human rights, that was just hurtful,” Cornish countered. He added that education and outreach efforts for the department should come from federal funding.

Also a point of contention in the bill is a 16.9 percent ($4 million) reduction in funding for Civil Legal Services. That represents about half of the $8 million reduction in funding for the judicial system and support services budget from the previous biennium. DFL members said the cuts will put an even heavier burden on Civil Legal Services to aid the state’s poorest residents who use those services to help them determine whether to pursue legal recourse.

“Our state and nation are based on the premise of justice for all, and this bill means justice will only be for those who can afford it,” said Rep. Tina Liebling (DFL-Rochester).

House Judiciary Policy and Finance Committee Chairman Steve Smith (R-Mound) pointed out that only one-third of Civil Legal Services funding comes from the state and that the bill does not attempt to restrict any non-state use of funding.

“We could have taken the easy route and just put in the existing numbers,” Smith said, “yet our responsibility of our fiscal committee goes well beyond simply filling in number in a spreadsheet. We faced many decisions that were not easy, but our task and our responsibility was to put the resources we have on the table and put them to their best and most appropriate use.”

Among the initiatives in the bill are: