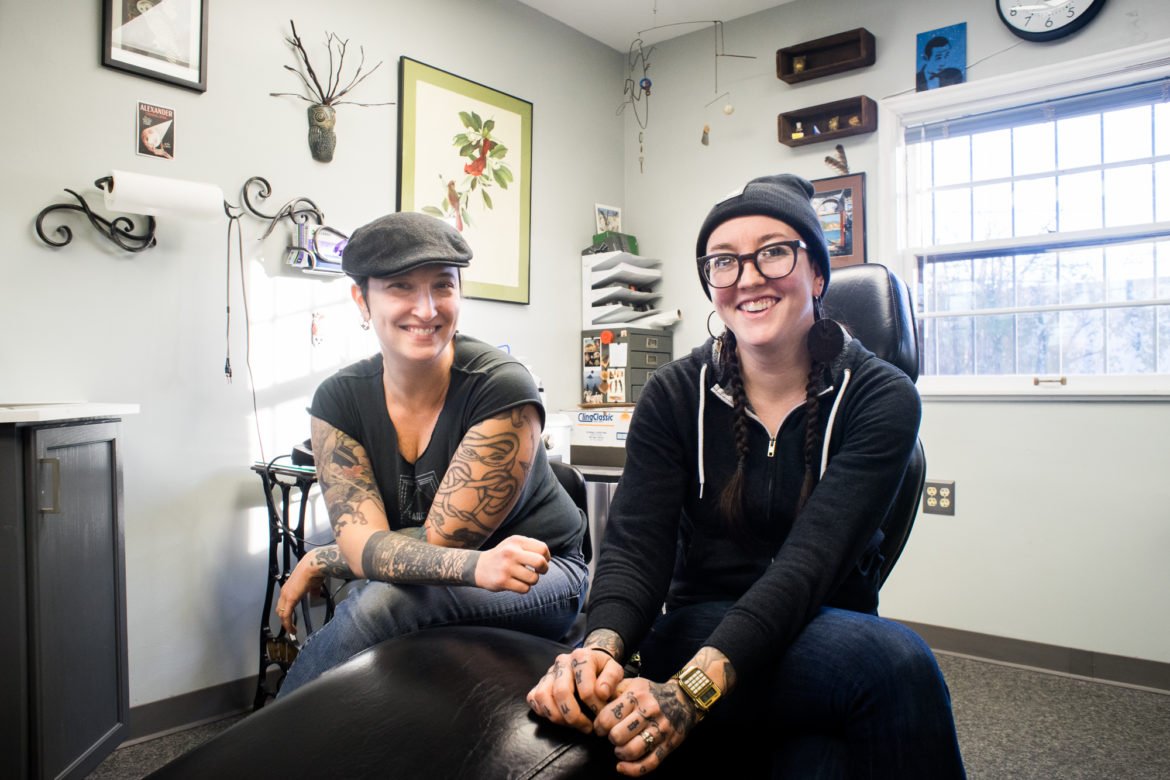 “The shop was built on a pinky swear,” Ariel Cafarelli said, beaming. It took a long time before she and her business partner and apprentice Alli Shelly, both tattoo artists, would finally open their tattoo parlor, but their promise to each other was to build a welcoming, LGBTQIA-positive space.

Small details like old drawers and vintage prints add texture to the relaxed vibe. Shop owner Cafarelli identifies as genderfluid and genderqueer, Shelly identifies as queer. Before opening the shop, both artists had worked in other tattoo parlors and noticed that marginalized people, queer-identified folks in particular, encountered pushback.

“It kind of turned into this thing of having to explain a lot, and call people out on things, and explain what queer is,” Shelly said. 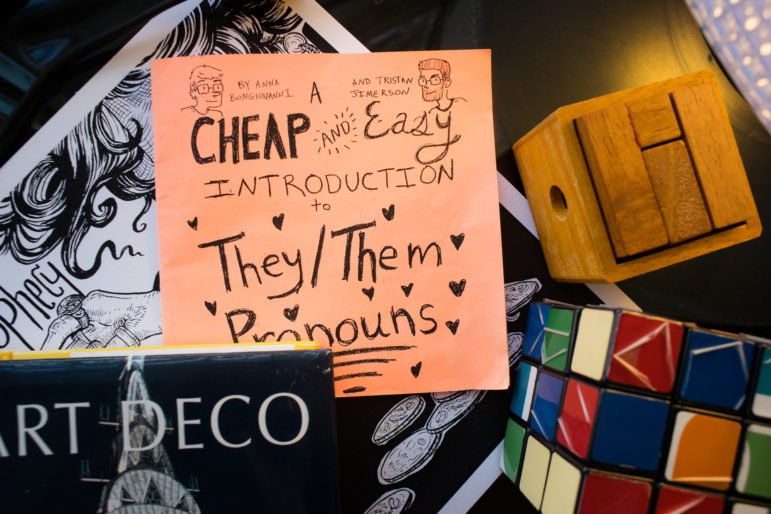 Zine in the lobby of Tailorbird Tattoo. Photo by Annabelle Marcovici.

Rather than explain her identity in the workplaces, Cafarelli said she preferred to “remain a mystery” to her straight white male coworkers. They both recognized a need within their male-dominated industry for LGBTQIA-centered spaces where they didn’t need to explain and defend themselves. In August 2015 Cafarelli and Shelly opened Tailorbird Tattoo in South Minneapolis.

Tailorbird, along with nearby parlor Jackalope Tattoo, are two tattoo shops working to change the face and culture of Minneapolis’ tattoo industry. Through hiring practices and welcoming atmospheres, Jackalope and Tailorbird are rejecting toxic masculinity – an attribute pervasive within the male-dominated environment.

”It felt really important to – for our own selves too, not to come from a place of victimization. And, you know it felt more empowering to say what we want in the world rather than what feels really [messed] up. Even though we do say that,” Cafarelli said. Having their own shop and enforcing a mission to “cultivate positive tattoo experiences” that “oppose all forms of bigotry” means that the workplace culture doesn’t have to breed patriarchal, gender or racial bias.

“When I worked at a shop with seven other artists, the people of color and me notic[ed] all these things that then the self-identified straight white males were oblivious to, because they didn’t have [our] perspective,” Cafarelli said. 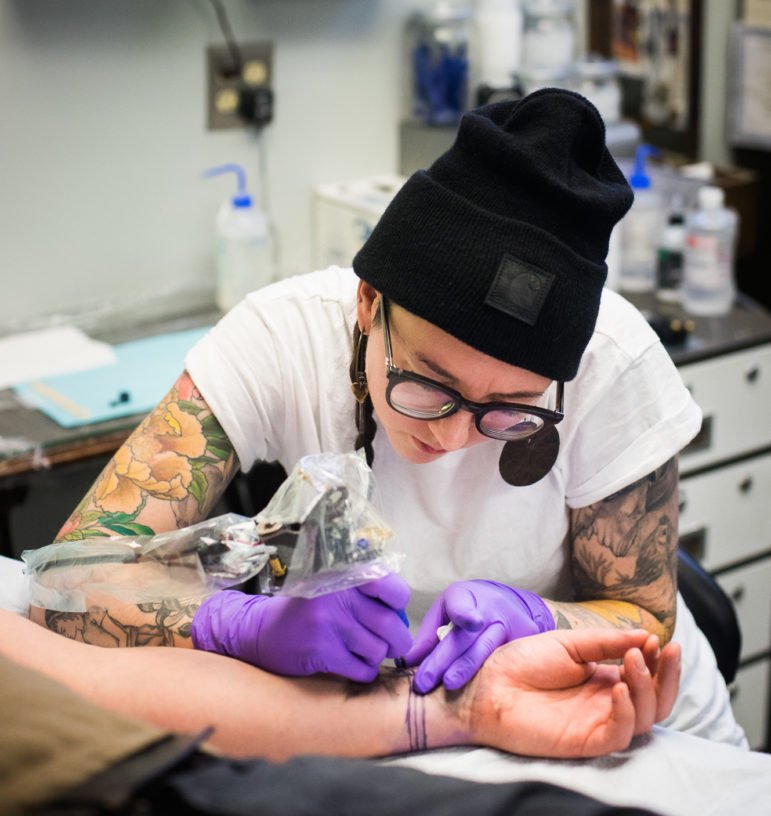 Jackalope Tattoo, also located in South Minneapolis, shares a similar mission and offers a place for predominantly women and queer folks to gather and get inked. It’s a busy shop, owned and operated by Bambi Wendt. When Wendt opened the shop three years ago, she did not plan to only employ female tattoo artists. Now being entirely female-run is one of Jackalope Tattoo’s key features.

As we walked through the tattoo parlor, stopping to talk with the visitors and admiring the numerous paintings Wendt remarked, “[Art] takes over your life.”

Jackalope features numerous paintings Wendt made herself – dinosaurs that roam through forests, skulls and dragons. Even the plushy head of the shop’s namesake jackalope adorns the wall. 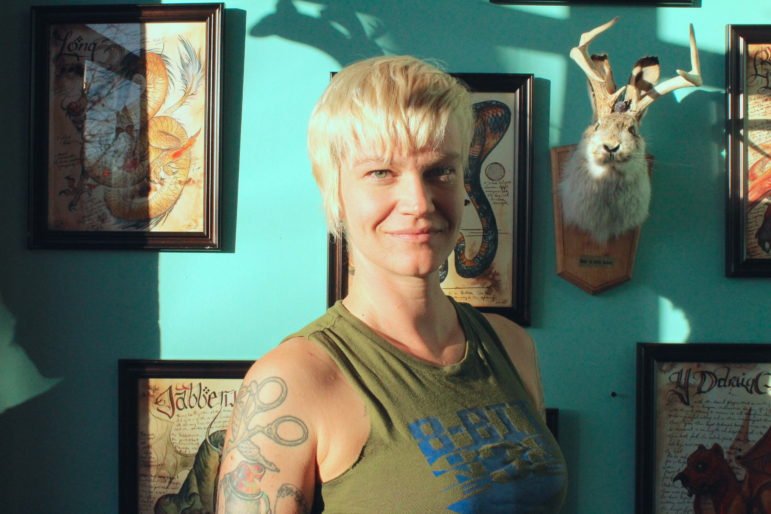 Bambi Wendt is the owner of Jackalope Tattoo in South Minneapolis. Photo by Cristeta Boarini.

Art and creativity are crucial to Jackalope’s mission, but just as important is the shop’s message of empowerment and welcoming. Such a mission is especially important to the relationship of tattoo artist and client.

“Getting tattooed is scary. It’s scary enough to just walk through these doors. Let alone, you know, meet somebody and then have them permanently alter the way that you look,” Wendt said, ”and if you don’t feel comfortable when you’re making those choices you can feel pressured into the wrong choices.” 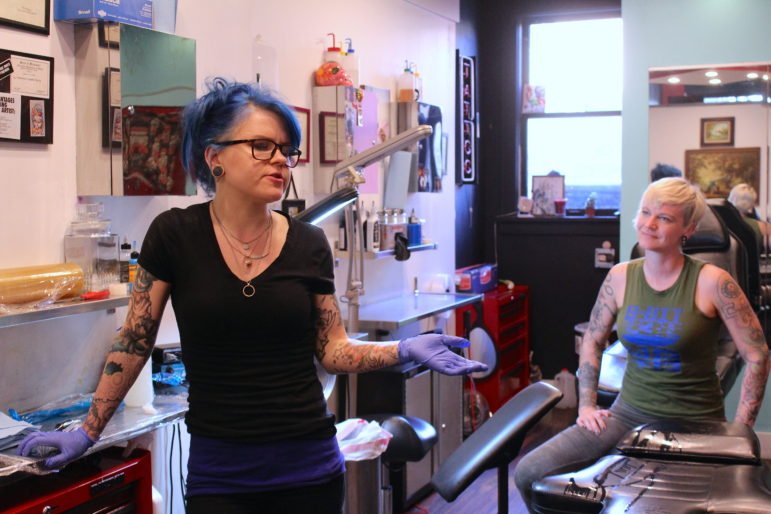 As a teenager, Wendt placed her child for adoption with a lesbian couple. Inclusivity has been an important theme of her life ever since. The experience contributed to the philosophy of Jackalope.

“[What] we’ve done has actually given permission to other shops to do that,” Cafarelli said, “I do feel like we’re friends with a lot of other shops around town, and I’ve noticed the sort of shift in how people are approaching talking about racism and sexism and homophobia and transphobia and how that affects people.”

Arts + Culture
Jennifer Mazur
Do NOT follow this link or you will be banned from the site!
X