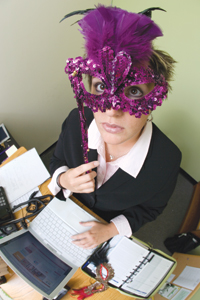 When Kate Guarino*, a 34-year-old St. Louis Park social worker, took a second job as a waitress in the summer of 2001, she considered it a temporary measure. Guarino had a goal: saving the rest of what she needed for a down payment for a house; and an end in sight: She figured it would take her about a year of working two nights per week to save $8,000.

Guarino was wrong on both counts. Happily, she saved the money she needed in just 10 months. But five years later, money is tight. She still waits tables part-time and expects that she will work two jobs indefinitely. “Social workers just don’t make much money,” she said frankly. “When I bought my house, I was making $38,000 a year.”

“The coupon queen”
Guarino says she sometimes wonders if buying a house was a smart move, but she’s happy to be a homeowner. “With the way housing prices have jumped, if I hadn’t bought when I did, I wouldn’t be a homeowner today,” she remarked. “I love my house, but it costs more to maintain than I had counted on, and the tax benefits aren’t as great as I had thought. I love my career, too, but I have a master’s degree and six years’ experience and I make $45,000. Do I love waitressing? Nope. But I’m single and there’s no one to pitch in. If I didn’t waitress, I couldn’t make ends meet, let alone save for retirement.” Last year Guarino averaged about $1,000 a month at her part-time job; she saved half, and the other half, she said, “went to pay for expenses and the occasional extra. I don’t live high on the hog: I haven’t had a real vacation in years. I go to friends’ cabins or camping.

“I’m pretty frugal,” Guarino added. “I drive a dependable eight-year-old car that I baby ’cause I can’t afford to replace it. I’m the coupon queen, I can’t remember the last time I bought clothes that weren’t on sale or from a consignment shop. I could choose to have a roommate, but I do value my privacy. I just wish I felt like I had more viable choices. Just the other night I did the math to see if I could afford to go to business school. I can’t, I’m still paying off student loans. That isn’t me, anyway.

“On one hand,” Guarino said, “I’m proud of the work I do. I really make a difference. But I’m sometimes embarrassed about how little I make. I know that there are lots of people who make even less. But I don’t like to tell people I have to work two jobs. Maybe it’s silly, but I find it embarrassing. I’m an educated woman with a ‘good job.’ Why can’t I make it working 9 to 5?”

Lifestyle choices
Carrie Ng* says she wouldn’t use the word “embarrassing” to describe how she feels about working two jobs, but the 45-year-old Mendota Heights woman still doesn’t want her co-workers, especially her subordinates and manager, to know that she’s moonlighted ever since she was divorced 12 years ago. Ng, a middle manager for a local government entity and mother of two daughters, makes good money at her primary job: $65,000 a year. And she said that her own life choices made it necessary to work two jobs. At the time of her divorce, she voluntarily accepted just half of the child support to which she was entitled. “At the time, [her ex-husband] made less than I did, and it was important for me to have a cordial relationship with him,” explained Ng, who also admitted feeling some guilt because she was the one who wanted the divorce. “I also made the decision to keep the house because I didn’t want my girls to experience any more upheaval. We were settled here, they had their schools, their friends. One of my girls was a dancer, the other was addicted to horseback riding. Those things cost money.

“I didn’t sit down and do a critical assessment of my finances, but it didn’t take long to know that with more expenses to cover, I’d need more income,” said Ng. “I ran the household, I knew how much things cost. I thought that with 50 percent of what he was required to pay, I could maintain the kids-not necessarily the lifestyle we liked. To maintain that lifestyle was my choice. I knew I could support myself and my kids; getting a second job was the right decision for me. So was cutting the child support. “I am the last person to say that they would be the right decisions for every woman. No one should feel guilty for taking the child support they are entitled to under the law, as long as it goes where it’s supposed to-the maintenance of the kids.”

Child support is just a memory today, and Ng has a new reality: tuition and expenses for her daughters, now both in college. She and her ex split the costs equally but, she said ruefully, “He makes more than I do now, and he’s remarried, so he has two incomes. Maybe it’s not really fair to say that-but my 50 percent takes a lot bigger bite than his does.” Ng’s second job is as a production assistant for a cable TV show. Prior to that she did telemarketing, worked for an insurance company, consulted for an educational company. “I’m really a pretty high-energy person,” she said. “I don’t need a lot of sleep. I do a lot of volunteer work. My part-time job brings in $500 a month. That’s nothing to sneeze at. I save some of it, I splurge some on myself, I give some to charity.” Unlike Guarino, Ng enjoys her second job. “It’s a young group, under 30, kind of fun to go to. It’s five minutes from home. I’m part time, I don’t care how they want me to do things, I’m not so invested-just tell me, I’ll do it.” She plans to work the job, or another, indefinitely. “There are a lot of benefits, not many drawbacks.”

From teacher to at-home entrepreneur
From 7:20 a.m., when the first child is dropped off at her home, till 5:45 p.m., when the last one is picked up, it’s a long day for 38-year-old Donna Brown* of Minneapolis, who runs her own in-home daycare business five days a week. But Brown’s entrepreneurial streak extends even wider; she also runs her own home-based eBay business. Brown asked that we not use her real name because she prefers that her daycare parents not know of her second business. “It’s just kind of awkward for people to know,” she said. “I figure my finances are nobody’s business.” Prior to the birth of her first child eight years ago, Brown, who has a master’s degree in elementary education, was a public school teacher. She planned to go back to school after her maternity leave, but found it hard to separate from her infant daughter. “We couldn’t make it on my husband’s salary alone, so I decided to open a daycare business,” Brown said. “I love kids, and I thought I could keep up some of my professional skills. Most importantly I’ve been able to stay home with each of my three while they were small.” Her youngest child is just 18 months old.

What she wasn’t prepared for, Brown says, was the low income from the daycare business. “I thought teachers’ salaries were low but I wish I could make that much doing daycare! I work two jobs now. I spend about 20 hours a week on my eBay business. And on an hourly basis, I make about twice at as much at my eBay business as I do at my daycare business.” Brown hopes say goodbye to daycare eventually; she’s planning to go back to teaching full time in about five years. “But I’m planning to keep the eBay business going,” she said. “It’s fun and really pretty lucrative. Plus my husband’s job (as an airline mechanic) has just not been stable. Who knows if he will even have a job in a year or two? And I really enjoy my eBay business.”

WomenVenture weighs in Shelley Jensen-Decker, career services manager at WomenVenture, thinks that the overall cost of living is the biggest factor in the increase in women moonlighting. “I don’t think salaries have kept pace with living expenses. The Twin Cities used to be an affordable place to live. It’s not any more.” Personally, she said, her own family couldn’t make it on one income.

“It’s my hope that [moonlighting women] are able to stay on top of their finances, not just make ends meet, but are able to put some money away. And doing something different, exercising a different set of skills, may open their eyes to different career possibilities.”

But she wonders, too, why important jobs like teaching and social work, jobs that traditionally attract large numbers of women, aren’t valued enough to pay a better wage. And she questions the toll working so hard can exact. “Women who work two jobs can suffer from stress because of the lack of time to attend to the details of their lives,” Jensen-Decker pointed out.

There are other stresses, too; she has heard from women who feel a stigma because they work two jobs. “There is a shame or perception that ‘I really shouldn’t have to do this,’ that it’s not a credible thing to do,” Jensen-Decker recounted. She feels a deep respect for the work ethic that leads moonlighting women to work so hard. “Not everyone would do this,” she said. “It’s too bad that they feel shame about it.”

* All three women we interviewed did not want their real names used for this story. The “Moonlighting in Minnesota” study is available online “here”:www.deed.state.mn.us/lmi/publications/trends/0406/moonlighting.htm