Brooklyn Park youth moderated the mayoral candidates' forum: (l-r facing forward) Ashanti Nyema-Gyebi, Tyler Hall, Bayou Djoyou and Charles Cooper. With his back to the photographer is Najee Shahid, who served as timekeeper.

On Tuesday, April 12 at Brooklyn Park Evangelical Free Church, a group of Brooklyn Park youth presented questions to the city’s mayoral candidates. An election is scheduled for April 30 to fill the vacancy brought about by the death of the city’s three-term mayor, Steve Lampi, who passed away on February 26.

Organized and moderated by Tyler Hall, Bayou Djoyou, Ashanti Nyema-Gyebi and Charles Cooper through the combined efforts of Village Child and ASSA Inc., organizations supporting youth engagement, the forum served to educate Brooklyn Park residents on the candidates before the election.

Brooklyn Park, a city that over the past years has experienced a very dramatic change in ethnic, socioeconomic and racial diversity (residents of color now comprise 47.6 percent of the city’s population), has never had a mayor of color. During this election, however, two candidates of African decent – one African American and one African immigrant – are vying for votes among a slate of 12.

The MSR focused on responses from these two candidates. 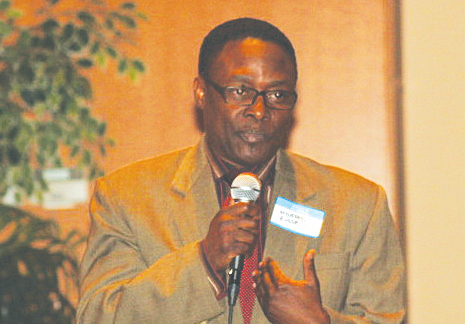 Wynfred Russell (pictured, left), a native of Liberia and an eight-year Brooklyn Park resident, is currently a planning commissioner, a board member of the Brooklyn Park Historical Society, and a former commissioner of both the Brooklyn Park Human Rights Commission and the League of Minnesota Human Rights Commissions. Highlighting his experience in designing programs that address the achievement gap, HIV/AIDS prevention and teenage pregnancy as proof of past success, Russell says that as mayor his focus will be on youth engagement. 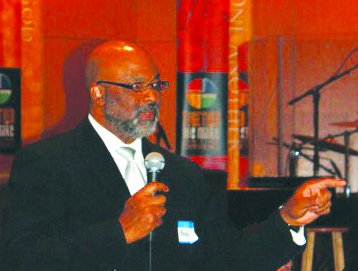 Boyd Morson (pictured, right), also an eight-year resident, is the father of three children who are graduates from the city’s high school. He describes himself as a longtime community and human rights advocate. He currently offers families low-priced legal advice. A clothing designer by trade, Morson tells how he came to Minnesota through conversations with then-Dayton’s department store regarding carrying his clothing lines in their stores.
With North Hennepin Community, Hennepin Technical, and Rasmussen Business colleges all located within the city limits, youth organizers asked candidates, “What would you do to get the colleges in Brooklyn Park involved in the community?”

Russell, a former college instructor at the U of M, North Hennepin Community, Normandale and Minneapolis Community and Technical colleges, said he will use his understanding of the inner workings of the college system to connect the colleges with the community. “I believe that if young people are nurtured and you work with them in a purposeful way, they can become very productive citizens of a community.”

Morson, however, said “Everybody knows that we all are not college material, so what do we do for those that are not college material? I’m not saying don’t go to school; I’m just telling you what reality is.” Morson added that offering current college students mentoring internships are an untapped resource and an opportunity for students to commit to giving back to the community.

The youth moderators also asked for “specific ideas for decreasing the crime rate.”

Morson, stating that the crime rate is highest across the nation between three and six pm, a time when youth are out of school but parents are not yet home from work, said that the first step to decreasing crime is building trust between the police department and the community.

An initiative Morson would like to implement is a community-based radio patrol where community members are paired with their neighbors and patrol the neighborhood with two-way radios that are a direct link to the police department. “What will it cost us? Committed people who…work together to begin to take back our streets and community.”

“Whether you’re Black, Asian, Hispanic or Hmong, crime affects all of us,” Russell said. “It’s going to become my priority to work with city council [and] civic groups to make Brooklyn Park a livable, thriving community for all of us.”

Russell said that to effectively decrease crime, funding for the community policing activity has to be increased. “I learned in graduate school that we have to follow the numbers, and the numbers in Brooklyn Park relative to crime show that 90 percent of the crime is committed by young Black males…

“The situation that happened unfortunately at Festival Foods, it affects this community,” he said regarding a recent homicide. “It affects the image of this community.” Russell said he will make sure that decreasing crime is a top priority if he is elected mayor.

When Morson was asked if he would like to respond to recent attacks regarding his campaign, he responded, “This is just a political game that people play to try to get you off message about what it is that I’m willing to do… There’s a good ole’ boys’ network here that I promise you that I will dismantle… I don’t care if you live north of 85th or south of 85th…or what your socioeconomic background is, or if you have a college degree. It doesn’t matter. Your voice needs to be heard in this city.”

During a personal interview with MSR, both candidates were asked to speak on matters of importance to them not brought up during the forum. Morson spoke on Brooklyn Park’s lack of economic development.

Due to harsh inspection practices and police visits, Morson said that Brooklyn Park has been unwelcoming to new businesses, especially those owned by people of color. Expanding businesses and those who relocated from Brookdale Mall moved in droves to the neighboring Maple Grove area, partially as a result of Brooklyn Park’s leaders not being open to new economic development.

He also pointed out that Brooklyn Park taxpayers are now being asked to pay for both a new police department and a library that were to be funded through the City’s contract with Target. Both the new facilities and the lack of new businesses, he said, will lead to increased property taxes for homeowners.

During the 2009-2010 school year, Brooklyn Park’s Northview Jr. High School made the Minnesota Department of Education’s failing schools list. According to Russell, of the school’s 900 students at the time, 80 percent were of color. Russell has worked with parents to develop ideas on turning the school around. He was the only candidate who mentioned the achievement gap at the forum.

“I don’t know why it wasn’t on the other candidates’ radar, but the reason why it caught my attention is because it directly affects the majority of the students and parents in Brooklyn Park,” Russell said “A lot of these problems are interrelated. When we talk about crime and how the young people are involved in crime, if we are not working with the young people and their parents and the school district, it starts to spill over into the larger community.”

During his closing statements at the forum, Russell said, “There are great things in Brooklyn Park that are working – successful policies. I’m not coming here with a sledgehammer to knock down things that have already been built and are working, but to enhance upon those things, to create jobs, to create opportunities for small business…

“I come with a track record of producing results, producing evidence-based programs that work… As your mayor, I will work closely with you as partners to make sure crime is reduced and jobs are created.”

Morson concluded by saying, “Through this emotional time of healing, we need someone who will take center stage and put all the issues, the negatives, the cloud that’s been hovering over Brooklyn Park for so long, on their shoulders and begin to…proactively work with you, City staff, and outside partnerships…

“I am the first and was the only person of color to ever make it to any general election in the 158-year history of Brooklyn Park… Look around. This is…truly a diverse community, and yet there’s no representation. We need a diverse perspective.”