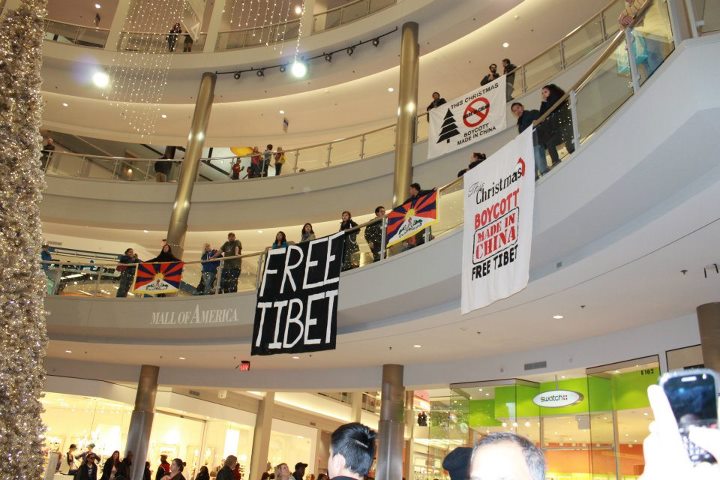 The Regional Tibetan Youth Congress in Minnesota protested at the Mall of America in 2011, as part of the "Boycott Made in China" campaign.

In June, in the township of Dzatoe (in Chinese, Zaduo) on the Himalayan plateau, two young men, ages 22 and 24, set themselves on fire. Tenzin Khedup is reported to have died within minutes. Ngawang Norphel was badly burned and is in the hospital. The township is nearly twelve thousand miles from the Twin Cities in the Yushul Tibetan Autonomous Prefecture, an area known for its rugged and remote nature. It is home to the Sanjiangyuan National Nature Reserve, where the headwaters of the Yangtze, the Yellow and the Mekong Rivers are found in the high Himalayan plateau.

When news about self-immolations reaches the Twin Cities, it reaches the second largest community of Tibetans in North America. It also reaches people like Tenzing Jigme, president of the Regional Tibetan Youth Congress (RTYC) in Minnesota, who says, “The frustration, especially for me, being Tibetan is– it angers me, it pains to know it, that people have to resort to such tactics but it also inspires someone like me.” Jigme is part of a younger generation of Tibetans who have never been inside Tibet. He was born in Nepal and came to the U.S. in 1999. He studied music at the University of Colorado and now works as an activist and performer with his rock band Melong. He moved to Minnesota and became involved with RTYC because, he says, “I wanted to do something, be a part of this new generation where we are using new tools to help–especially music.”

The Minnesota chapter of RTYC was started in 1998 and provides service to the Tibetan community through programs that assist with health, education and employment. Much of its work is political. The group organizes protests such as the “Boycott Made in China” campaign in 2011, in which banners were hung in the IDS Center and at Mall of America, and a hunger strike on the steps of the State Capitol in February.

The message in their protest is one of solidarity with people living in Tibet. One of their main goals is to share the news that comes such a great distance and at such high personal cost. The self-immolations are easy to understand for Jigme. He said, “The hope, I think, is that they [those living in Tibet] want people to know what’s happening, to be aware of the brutality of the Chinese regime. China has always claimed that Tibetans are happy inside Tibet, that Tibetans are prospering [under] the Chinese rule. But this is just the total opposite.”

The news was accompanied by graphic photos and video that were smuggled out, shared and published online in sources such as the British Mail. They show the young men standing near cars and motorcycles while passers-by watch in mute horror as the two are engulfed in bright orange flames. Before one crumples and the other panics in pain, they stand holding Tibetan flags, which are banned in this region mainly populated by Tibetans.

According to the International Campaign for Tibet, the pair of former monks became the fortieth and forty-first Tibetans “confirmed to have self-immolated since February 27, 2009” in protest of Chinese rule in Tibetan-populated areas and suppression of Tibetan culture and religion. The images from Dzatoe are some of the most graphic and galvanizing to have been recorded and smuggled out of the region known not only for its restrictions on expressions of Tibetan nationalism but also for strict censorship of the news. The campaign maintains a Self Immolation Fact Sheet that provides in one place the growing number of people who have resorted to this form of protest.

According to Jigme, “It’s so hard to get information out [of Tibet].” He says that cell phones, cameras and social media have become important tools for sharing the news, “Because of the technology these days we’re able to see the videos and we’re able to see the photos which we were not able to do five years ago.” He also finds the immediacy of the photos and videos to be compelling, “These things we are seeing–everything’s live.”

This rapid information network extends from Dzatoe to India, where a monk, formerly from a monastery in the Yushul region, was able to pass on the graphic images and the story from Dzatoe to others via the Internet. Although the information may become viral, it is often difficult for the news to go mainstream. The complex political situation of the disputed region along with the disturbing images of self-immolation, seemingly at odds with the idea of non-violent Buddhist practice, can make it a difficult sell on the nightly news.