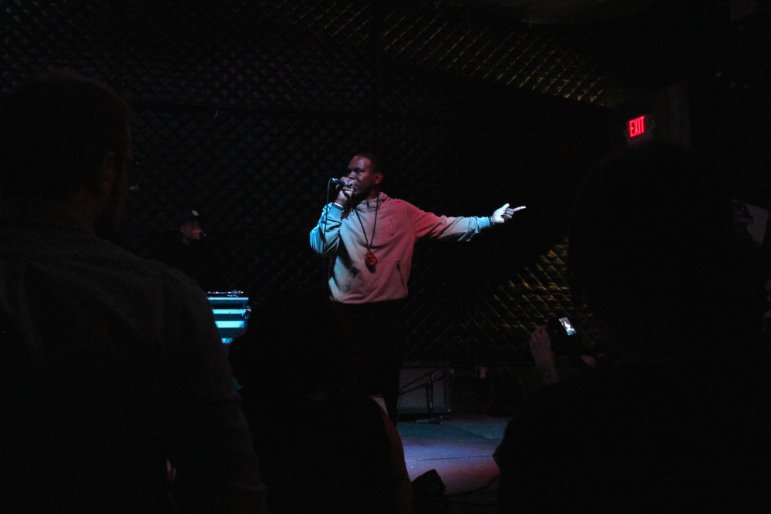 Minnesota is more than a thousand miles away from hip hop’s mainstays on either coast. Yet, Complex listed Minneapolis as one of the 15 best cities for hip hop fans in the United States, and Mic named the Twin Cities the “greatest hip-hop scene you’ve never heard of.”

Despite the geographical pull to mimic other regions, Twin Cities hip hop has managed to trademark its own experimental sound, humble aesthetic (most artists opt for toned down and muted attire), and, of course, the white supremacy that comes with our state’s infamous Minnesota Nice.

“The majority of the main faces that you see are white, leaving us [hip hop artists of color] to be in the minority while we’re the majority and the birth of the culture,” said local artist and activist Maria Isa. “Minnesota, as diverse as our cities are, it’s still very Minnesota nice, Minnesota safe and Minnesota white.”

When out-of-state and mainstream media and fans refer to Twin Cities hip hop, independent hip hop label, Rhymesayers Entertainment, is often their point of reference. The common faces of Rhymesayers, which celebrated its 20th anniversary this fall, include Brother Ali, an albino Muslim rapper who identifies as white, and Atmosphere, a duo of racially ambiguous (arguably white-passing) hip hop artists.

However, to Toki Wright, a Black North Minneapolis rapper who released two albums with Rhymesayers, these are just a couple faces of the Twin Cities hip hop scene.

As in every corner of Minnesota (and the U.S., and the world), white supremacy prevails in Twin Cities hip hop. But, at its core, hip hop is an art and culture founded by Black artists and other artists of color in response to their racial oppression.

Each emcee has his/her own story about how racism and white supremacy have affected his/her career and experiences within the local hip hop scene. Wright told accounts of being carded at his own shows and of a drunk woman calling the police to report he stole her purse while his name was on the marquee. Maria Isa, who is Puerto Rican, described how a local entertainment paper incompetently referred to her as Afro-Cuban. Malik Watkins, known as Minneapolis rapper MaLLy, recalled a white manager calling him the N-word twice after a business meeting.

MaLLy said the incident made him question “how many other people, that I know, that support this artform, or eat off of this culture, this Black artform, really feel this way?” He said he sees this ability to both benefit from, and take over, a Black space and artform while holding racist attitudes as “one of the essences, or cornerstones, of white supremacy.”

There also exists a widespread inequity in how white artists and artists of color are received by tastemakers, venues and concertgoers.

MaLLy described how the tone of many audience members at the Rhymesayers 20th anniversary concert changed from supportive when white-identifying Brother Ali rapped a song like “Dear Black Son,” to apathetic when Toki Wright and I Self Devine, both Black rappers, proclaimed messages such as “F— the police” and “kill white supremacy” on stage. 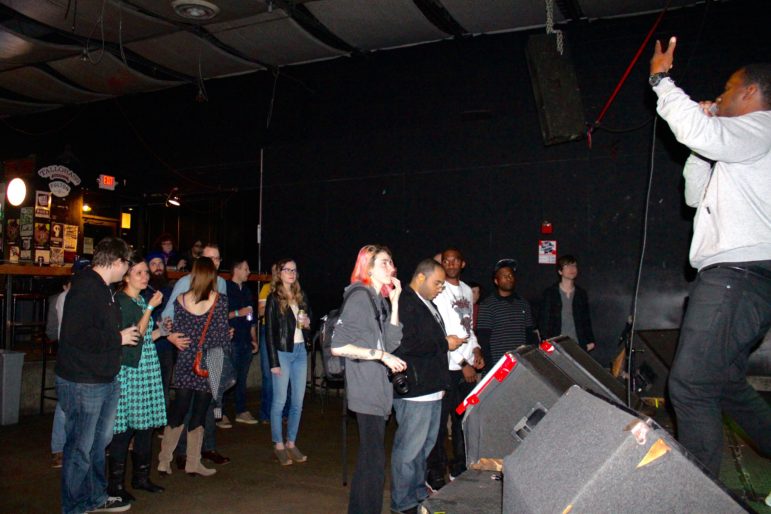 MaLLy performs for a mainly white audience at the Triple Rock Social Club on April 29. Photo by Kayla Steinberg.

Jake Virden, a Minneapolis activist and rapper known as G.P. Jacob, connected instances like this to the underlying beliefs of white liberal Minnesota. “A liberal culture likes the idea of white rappers with quasi-political, quasi-emotional music, but really don’t want to deal with the reality of what Black Minnesotans live through, or poor people live through, or Native Minnesotans live through,” he said. “Minnesota is uncomfortable with the reality of murder and police brutality and white supremacy. A lot of times those tastemakers and cultural gatekeepers lift up people who look like them- their cousins and their kids- in their scenes.”

When white fans and media do seek out Black artists, both G.P. Jacob and MaLLy perceive some of them as searching for a fetishized, or minstrel experience. This fetishization without actual appreciation and respect for hip hop culture comes from the very roots of white supremacy and racism in the United States.

The fact that hip hop is a Black artform does not mean white allies cannot listen to, appreciate, or even create hip hop music. However, we must always be conscious of the space we take up in the scene, as well as the political and social disadvantages of those who established the culture.

Many white Minnesotan artists and fans ignore the roots of hip hop while profiting off the music, art and culture. Yet, white emcees who are intentional allies are visible around the Twin Cities.

Take, for example, G.P. Jacob, who recognizes the privileges of being white, and self identifies as European-American in order to reconcile his ancestry, honor his working class background and breakdown the hegemony of whiteness as a violent social construct. His goal in his music, along with his work as an organizer at Hope Community, is to radicalize working class white communities.

“I understood at a young age there was a sickness, a disease, with that white mentality that accepted racism, and turned a blind eye to the oppression we were seeing,” said G.P. Jacob, who grew up in a working class family in Northeast Minneapolis. “When I write, I’m conscious about not trying to be another white rapper that’s oblivious to the situation, and I’m also not trying to be another white rapper mimicking and performing minstrel.”

First, “Be authentic to your language and your voice. Specifically, don’t put on a Black accent when you rap or don’t, all of a sudden, start talking about a street code lingo you don’t really know about.”

Second, “Talk about race…. Challenge the spaces you’re in. Respect and appreciate the architects- the Black people who created the artform. Keep that history alive. Spread that knowledge… If you want to really practice hip hop and not just be an appropriator or a vulture, you’ve got to be moving the movement forward. A lot of times it’s educating other white people. That’s our responsibility. Black people have known about racism. They don’t need us to tell them about it.”

Finally, “Be brave and try to add something to the mix… From the sounds you sample, to the production, to the stage performance, to the aesthetics. Do something that is going to be appreciated, and will be an addition to the culture, rather than just a poor rendition of something that’s already been done.”

G.P. Jacob also sees his racial justice organizing work as a way to earn his spot on the mic, a common theme among Twin Cities hip hop artists.

The faces in the wings of local hip hop concerts are the same ones that are on the front lines of Black Lives Matter Minneapolis demonstrations. Muja Messiah and I Self Devine’s 9th House album was a soundtrack of the Fourth Precinct occupation. Maria Isa, along with other artists and activists, including Muja, knocked on Minneapolis Mayor Betsy Hodges’ door to ask her to tell the Minneapolis Police Department to cease the abuse of protesters at the occupation.

These links between music and movements travel through all of African American history. Leola Johnson, chair of the Macalester College media and cultural studies department, links contemporary hip hop activism to the participation of Bernice Johnson Reagon, founder of legendary a cappella ensemble, Sweet Honey in the Rock, in civil rights demonstrations. And to jazz artists who raised money for the Scottsboro Boys’ defense in the 1930s. And all the way to the use of spirituals that spread solidarity and strategy throughout the South during African enslavement.

In addition to connections with past social and artistic movements, Twin Cities hip hop artists are also using the technologies available in the 21st century to advance their careers and creativity. With white media, venues and tastemakers blocking out local hip hop artists of color, artists are now creating their own spaces to thrive.

“In 2016, saying these platforms have never supported us, we’re not gonna give our energy to spaces and places that don’t care about us,” said Wright. “We’re not focusing on making other people happy, but making ourselves happy and respecting ourselves and holding ourselves to a higher standard. We can recognize ourselves. We have the internet, so we can make it global and not need the middle man, anymore.”

In this vein, Wright produces #MamaduMondays, in which he puts out new music every week and co-hosts Soul Tools Radio, Saturdays on KFAI, with Brittany Lynch, Reggie Henderson and others, giving rising artists a platform to further their careers.

Maria Isa attributes Intermedia Arts’ B-Girl Be festival as the first platform for women in global hip hop to be recognized and to unify, instead of being in direct competition with one another. She also started her own company as a 20-year-old to circumvent the male-dominance of the music industry and hosts a podcast, Latina Theory, with Chicana artist and organizer Arianna Genis.

Furthermore, artists are reclaiming their music and lyrics from white supremacy. “When it comes to the demographics of Minnesota and many white fans, there was definitely a time I used to wonder if me telling who I am, my experiences or how I felt, if a person who was white listened to it, would they get turned off by me sharing my truths or my culture,” said MaLLy.

Now MaLLy, who is working on a new album titled “The Journey to a Smile,” only writes to reflect his own experiences and identity and does not aim to be “the Black dude white people are comfortable with.” He said, “I’ve experienced that people want you to be in a box, want you to make them feel good…You can limit yourself if you pay too much to what people want.”

Maria Isa added, “That’s the change I’ve seen, is that you don’t have to be told you should dress like this, or you should make your music sound like this. I think ‘you should’ in the Twin Cities is being limited, and it’s becoming ‘I am’ going to do this, and ‘I do’ do this.”