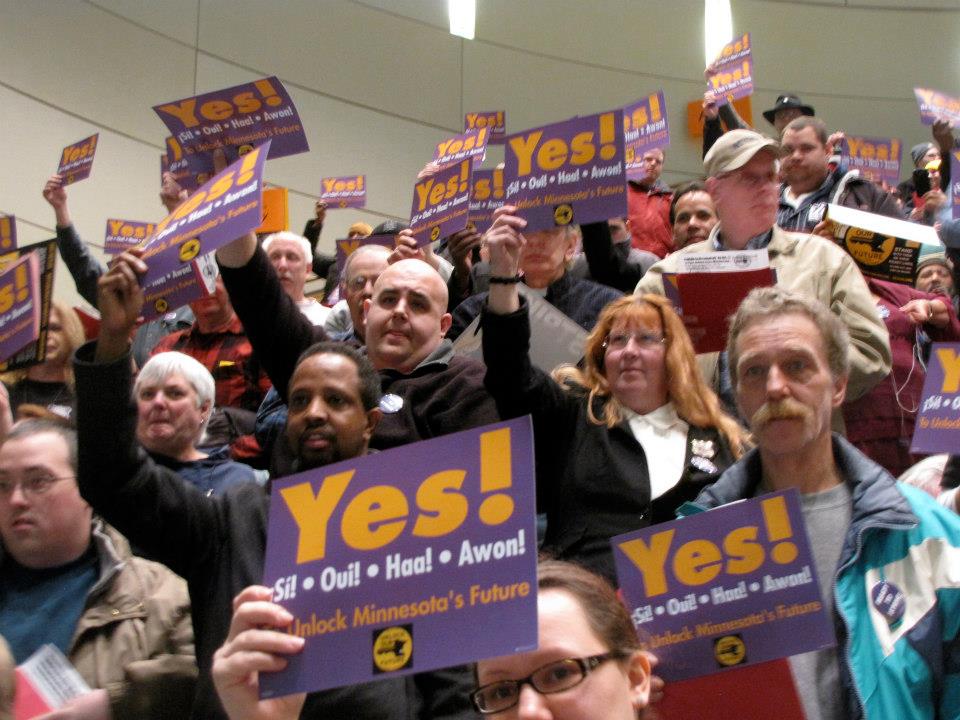 UPDATE 2/27/2013: According to a 4:45 a.m. press release, security guards at six out of seven Twin Cities security guard companies are out on strike today.

The strike was scheduled for one day only, February 27.

The security guards had gathered at South High on Sunday, February 23 for a day of organizing that started at 1:00 p.m. The security guards—members of SEIU Local 26—were preparing for a possible strike later in the week. The day included four hours of direct action training led by Take Action Minnesota. One woman later led fist-pumping and organizing cries of “Si se puede.” Rows of cafeteria tables were littered with purple, security badge-shaped demonstration signs with “Stand for Security” handwritten across the front. A mass of delivery pizzas had just arrived. The atmosphere was genial.

“If you can hear me, clap once,” an SEIU staff-person called out at one point. Everyone clapped. KARE 11 was there to shoot footage of the group decorating signs and the organizers wanted it to look good. “Make sure when the camera’s in here, we’re all working,” he said, “not goofing around.”

Although they allowed themselves to have fun, the organizers remained serious about the possibility of a strike. Kim Martini, a security guard for six years and a member of the SEIU bargaining unit involved in the current bargaining process, believes the security companies don’t take the possibility of a strike seriously. “I think we’re stronger and more prepared for this than they believe,” she said.

The prospective strike comes on the heels of a contract dispute involving another group of workers represented by Local 26—janitors. On Saturday, February 22 bargaining talks between employers and janitors hit a positive note when employers offered workers a new contract that included wage increases and improved benefits coverage. The agreement is tentative and janitors are expected to vote on it this week.

One factor in the janitors’ success was the broad coalition of support they were able to draw. According to an SEIU press release, the janitors’ campaign received support from influential Twin Cities figures, consisting of “members of the business community, and elected officials—including members of the Minneapolis and St. Paul City Councils, dozens of state legislators, Mayor R.T. Rybak and Congressman Keith Ellison.”

The action around the security guard bargaining process is part of a collective “week of action” involving a slew of grassroots organizations. SEIU and Take Action Minnesota were joined at the South High organizing day by members of CTUL, Minnesotans for a Fair Economy, Neighborhoods Organizing for Change, Occupy Homes, ISAIAH and others. On Tuesday, February 26th, organizers will head downtown to Target, both the corporate and retail buildings, for public demonstrations. Other activities are planned for the week as well.