White people live longer and prosper more in the Twin Cities metro area, according to a Blue Cross/Blue Shield Foundation-sponsored study released October 7 by the Wilder Foundation. The disparities between white and black residents are dramatic: seven years in life expectancy, with whites averaging 81 years and African Americans only 74 years. Metro-area American Indians fare even worse, with an average life expectancy of only 61 years. Other measures of health, such as low birth weight and adult diabetes, showed similar results.

Race makes a difference, though not always the expected difference. “Asian and Latino populations, as well as African immigrants, often have better health outcomes than non-Hispanic whites, American Indians and U.S.-born blacks in our region,” the study found. Asian life expectancy is highest of any racial/ethnic group, at 83 years.

Race is part of a constellation of socioeconomic factors that affect health and longevity. “Affect” is the key word here-the statistics paint an overall picture, and any individual’s story may differ. The overall picture reveals important public health issues.

In addition to factors of race and ethnicity, The unequal distribution of health in the Twin Cities looked at income and neighborhood as factors influencing health of residents. Income showed a dramatic correlation with life expectancy: “In fact,” said the study, “the relationship is so striking that it looks like every additional $10,000 increase in median income ‘buys’ another year of life in our region.”

Life expectancy varies by zip code, as does income. The longest life expectancies (83 years) were in wealthier second-ring suburbs, and “small pockets in both Minneapolis and St. Paul.” Next, with life expectancies of about 80 years, came other suburbs and well-to-do city neighborhoods. “Working class” areas and suburbs with life expectancies averaging about 77 years included “at least parts of several close-in suburbs like Fridley, North St. Paul, Inver Grove Heights, as well as outer-ring areas, like Belle Plaine, Maple Plain, Bethel, and Still water” and several city neighborhoods-Camden, Northeast, Longfellow and Nokomis in Minneapolis and North End, West Side and Merriam Park in St. Paul.

Finally, the areas with the shortest life expectancies, between 70 and 75 years, are all in the poorest areas of the region’s two central cities, including the Near North, Phillips and Powderhorn neighborhoods in Minneapolis and St. Paul’s Frogtown, West Seventh, Payne-Phalen, and Dayton’s Bluff neighborhoods.

An issue of public health

Similar studies in Wisconsin and California look at the impact on “health outcomes” of social factors, health care, and individual behavior. According to these studies, social factors such as neighborhood conditions and social inequalities account for half of the impact on health outcomes. Individual behaviors, such as tobacco use, diet and exercise, etc., account for another 30 percent. Access to medical care and quality of care account for the remaining 20 percent. 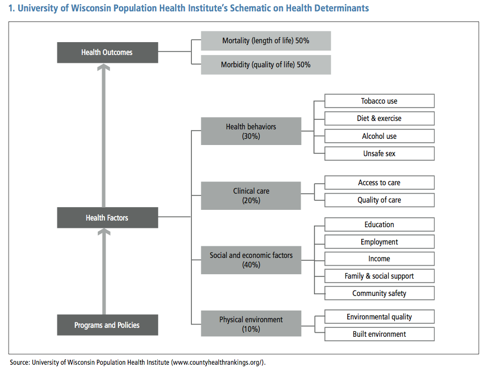 So, in order to work on public health issues, communities need to address the social and economic factors that have such a large impact on the individual health of community residents. The Growth and Justice think tank, in one of several responses to the study, noted that “unequal societies … are significantly unhealthier than more egalitarian communities and nations.” Minnesota, for example, has higher longevity than states with greater inequality, such as Mississippi, Louisiana and Alabama.

Citing examples of successes in culturally-based programs for youth, the report notes strengths in “cultural practices of racial and ethnic minorities” that can contribute to efforts to reduce health disparities.

The report concludes, “Eliminating health inequities could also be an important part of cost containment for health care in our region” and “could provide our region a much needed competitive advantage as we advance out of the Great Recession.”