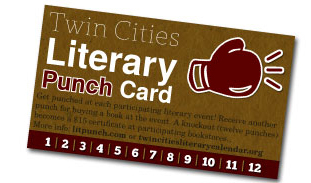 Last Wednesday at Club Jäger, just over a hundred local book nerds kicked back with some booze-filled punch and had a grand old time discussing past AWP conferences, what books are coming out this spring, and indulging in some general hobnobbery with Minnesota’s literary royalty. Judging by the Twin Cities Lit Punch’s first big happy hour, the promotion is going to be a success.

If you’re attuned to the local book scene then you’ve probably heard about the initiative, but just in case you aren’t, I’ll briefly go over it again. Recently, the big three local independent publishers (Coffee House, Graywolf, and Milkweed) joined forces with the folks from The Loft and Rain Taxi to devise a way to get more people out to more literary events, mainly by way of providing a catchall resource for marketing those events. It works like this: you go get a Twin Cities Literary Punch Card either from one of your local bookstores (Magers & Quinn, Common Good Books, Micawber’s, and the University of Minnesota Bookstore) or from one of the sponsored events, and then for each eligible event you attend you get one punch—like a coffee card. (The hole punch is actually shaped like a boxing glove, which I have to admit is about as adorable as a wittle-bitty puppy, dressed as a princess and barking “I wuv wu!”) Once you get 12 punches—or a “knockout”—you can turn your card in at any of the participating bookstores and receive $15 off your purchase. Additionally, you can be entered into a drawing for other types of goodies and swag. For those who already attend local events it is a pretty sweet deal, an extra reward for being naturally bookish and awkward.

One question that keeps coming up over and over again—at least for me—is, what about people who aren’t already planning to attend these events? While I was already planning on going to see Craig Thompson at the Minneapolis College of Art and Design on September 26, does the thought of going to Common Good Books to see William Kent Krueger read just so I can get “punched” give me the goose pimples? Well, no, but then again, my Bao Phi is another woman’s Michael Perry, you know? Something else to consider is that among the 100 or so events that appear on Rain Taxi’s Calendar of Events for October, only nine of them are punch-eligible…but who knows, perhaps they aren’t all marked yet.

Anyway, no matter how good the bandage is, we should still consider why the literary scene is bleeding attendees. Way back in the good old dog days of August, Philip James Hart had some interesting, though brief and dissenting to the popular, things to say about the promotion in the Onion’s Twin Cities A.V. Club. In his piece, Hart speculates on why crowds at literary events have been getting smaller: “Maybe it’s that people are getting dumber. Maybe it’s that the literary community is so flippant and full of itself that outsiders are made to feel patronized. Maybe it’s the proliferation of a culture that demands instant gratification and rewards a short attention span. Maybe it’s the recent re-popularizing of the anti-intellectual movement (what Isaac Asimov called a ‘cult of ignorance’) in the United States at large.”

To this list I’d like to add the following: maybe there are just too many events. Maybe genres have been split so far over the course of time that even if someone has a super-specific taste in book types, there are probably enough books of that sort, and readings by those authors, to keep a fan of that genre occupied until the day he or she can no longer read. Maybe the “industry of cool” that Philip Seymour Hoffman, playing Lester Bangs, talks about in Almost Famous has spread to the book world, and no one likes to read anything that isn’t manhandled by Dave Eggers first. While all of these suggestions seem pretty plausible, not to mention probable, Hart goes on to further speculate that “rather than examining these possibilities, Milkweed, Graywolf Press, Coffee House Press, Rain Taxi, and the Loft Literary Center are solving the problem in the best way they know how: with a gimmick!” This suggestion bums me out a little.

While I hate to be a part of populace that is ever whining, “Well at least they’re doing something,” it’s a refrain I’m going to be singing until the future of this Lit Punch promotion reveals itself.

And although it may seem like a strangely simple solution to a problem that might be rooted in dark, and deep-seated cultural issues, one thing that continues to surprise me about Minnesota is the willingness of organizations to try and try and try and try. The economic downturn has been hard on everyone, non-profits especially, and it’s really impressive that instead of standing around, watching the boat go down, the community is paddling their little hearts out; ‘tis a noble deed.

At the end of yet another positive-outlook news piece about the Twin Cities Literary Punch Card promotion Knight Arts’ Susannah Schouweller tied it all together by saying “It’s a simple idea, but one rooted in a perennial truth, especially for those working in the arts: When we all do better, we all do better.” Which is true, except—in this case—for those who aren’t participating, and there seem to be a lot of them, both stores and readers alike.