With the scent of fresh cut French fries and the sounds of salsa music in the air, I found a seat near the main stage at Mears Park to take in the music of Cyrus Chestnut’s trio at the 2013 Twin Cities Jazz Festival on Saturday, June 29. Chestnut and his crew were just warming up on stage, so my timing was good. 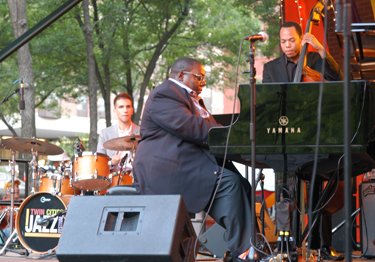 Mears Park was packed with a rainbow assortment of people, many of whom sat intently in their fold-up lawn chairs. Some festival-goers, myself included, found a giant-size rock to sit on, which was draped with someone’s colorful blanket.

Then drummer Evan Sherman and bassist Eric Wheeler proceeded to open things up with a Stevie Wonderesque tune, that gave way to a number of songs that included music from Chestnut’s upcoming album (which is scheduled to be released in Aug./Sept. of this year), as well as songs from Duke Ellington, John Coltrane, and Lionel Richie.

The band swung and swayed their way through “In a Mellow Tone,” and “Moment’s Notice,” but perhaps the song that best showcased their near telepathic interplay was, oddly enough, Lionel Richie’s “Hello.”
jazzfestcrowd 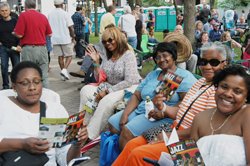 At times Chestnut got down right classical. He had just taken everyone to church, followed that up by playing the blues with plenty of feeling, and then he blew that entire image of disciplined presentation and cool self-assurance away with complete abandonment. His modern and edgy approach was classic Chestnut and served as further evidence of his broad and amazingly diverse musical palette.

Expect to hear more great things from 19-year-old Wheeler, whom I watched with raised eyebrows throughout the set. He particularly shined on Chestnut’s soulful and tasteful “Song for the Cool.” Wheeler was receptive to Chestnut’s every move and played with the intelligence and execution of a seasoned veteran.

On a nostalgically soulful note, Chestnut closed his set with the famous jazz standard, “Mercy, Mercy, Mercy,” written by Joe Zawinul in 1966 for Julian “Cannonball” Adderly.

After Chestnut’s set, it was time to hit the Artists’ Quarter, where pianist Jon Weber was holding court. The St. Paul native drummer Matt Slocum jammed with long-time collaborator tenor saxophonist Walter Smith III, who also appeared at the festival earlier that evening. Smith has an album in the works with Concord that’s slated for a late March, early April 2014 release. 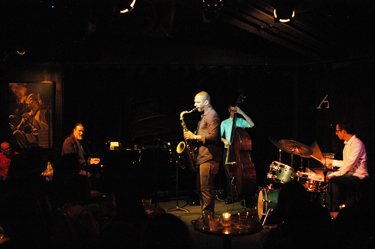 The “standing room only” crowd seemed to find their own groove just as the band played, “You, the Night, and the Music.”

Smith, (Matt) Peterson, Slocum, and Weber rounded out the evening and the entire festival with an enthusiastic rendition of Thelonious Monk’s “Let’s Cool One.”

Among the jazz club attendees that night at the Artists’ Quarter was local MPR jazz legend Leigh Kamman, and Twin Cities Jazz Festival Director Steve Heckler, whom I patted on the back before I left for a job well done at this year’s festival.