Holding up signs that say yes in English, French, Oromo, Somali and Spanish, janitors voted overwhelmingly to authorize a strike, if members of the bargaining committee (some pictured below) believe it is necessary.

Janitors who clean the majority of commercial buildings in the metro area have authorized their union bargaining committee to call a strike if a fair contract is not reached with Twin Cities cleaning companies.

Members of Service Employees International Union Local 26 voted overwhelmingly Saturday to authorize leaders to call a walkout over unfair labor practices, meaning more than 4,000 janitors could go on strike at any time against ABM, Harvard, Marsden and other cleaning contractors.

Negotiations are slated to continue this week, the union said. The janitors have been working without a contract since Jan. 8.

“No one ever wants to go on strike, and we’ve worked hard to avoid that, but we are also ready to move forward,” said Chico Coleman, a janitor at Securian in Saint Paul and a member of the janitors’ bargaining team. “We want to make green cleaning the norm in the Twin Cities, and make sure that our jobs are full-time green jobs with good health care for our families.”

In two months of negotiations, cleaning contractors have repeatedly rejected green cleaning proposals to use only products with green chemicals that are safer for workers, tenants, and the environment; and to support transitions to day shift cleaning that could save building owners millions in energy costs and reduce the carbon footprint of hundreds of buildings. 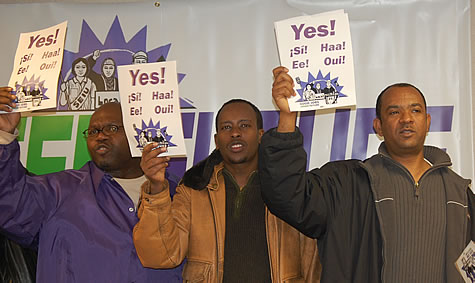 “With our economy in a recession, we sought specific ways for the janitorial industry to save money and achieve cost predictability so that it could be a win-win for everyone,” said Javier Morillo-Alicea, president of Local 26. “We want to encourage and support buildings that choose to switch to day shift cleaning since it can reduce energy use by up to 8 percent, and we have proposed a common health insurance plan with 0 percent cost increases and stable premium rates for janitors and employers. Unfortunately, the companies have responded by demanding the elimination of full-time jobs, bargaining in bad faith and retaliating against union members.”

Despite working at office properties of profitable Fortune 500 companies like US Bancorp, Ameriprise, Target, and Medtronic, many full-time janitors have had their income cut by as much as 25 percent in recent years through a reduction in hours, and have inadequate health insurance coverage that has left many with thousands of dollars in out-of-pocket costs, the union said.

“I’ve had my nightly hours cut back in the last year, and many others have had their hours cut even more” said Maribel Quiroz, a janitor at Normandale Lake Office Park. “I ended up losing my house – no one can afford to lose so much of their income.”

Janitors were joined at the vote by several supporters, including Congressman Keith Ellison, who called on the companies to negotiate a fair settlement, and Minneapolis Regional Labor Federation President Bill McCarthy, who said other unions will honor the janitors’ picketline if they strike.

“I want you to know you do not stand alone,” McCarthy said. “You have the rest of the labor movement behind you.” 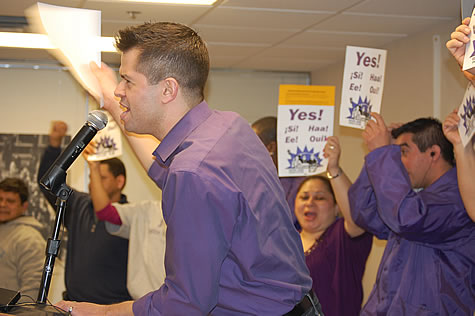