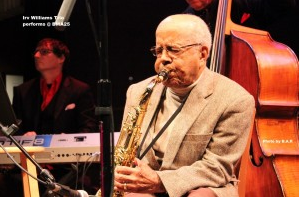 “Coming here tonight, I see so many great friends in the house who are here with us tonight…Without you there would be no us,” Pete Rhodes, the founder of the BMA Network, said at its first BMA Channel celebration held at the Dakota Jazz Club & Restaurant on Friday, December 21.

This three-hour event, which Rhodes hosted, was free and open to the public. A first-of-its-kind event, it also served as the 25th anniversary of the BMA Network. Sponsors of the event included IPR, Comcast, and the Minnesota State Lottery. Technically speaking, BMA has been around for 28 years, but as far as formal annual celebrations go, the number 25 works.

“I was talking to a good friend and she said, ‘Why are you going to chop off those other three years?’ My wife said in a couple years when we say it’s our 30th anniversary, some of you who were here for our 25th will say how the heck did he get to 30 that quick?” joked Rhodes. 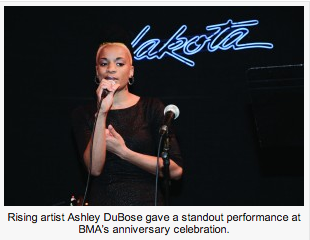 For those unfamiliar with BMA (Black Music America), the network produces the annual Minnesota Black Music Awards and delivers culturally specific programming with an exclusive music program, videos, local and national news and original video features. It was launched in 1984 as a cable music service to 25,000 homes; the channel now reaches over 500,000 cable households on Comcast Cable (channel 937). Rhodes is looking forward to expanding service to provide a platform for diversity in programming to be enjoyed by all communities.

Kicking off the evening festivities was 93-year-old saxophonist Irv Williams with his band (also appears on Fridays at the Dakota from 4-7 pm) featuring go-to Twin Cities-based musicians pianist Peter Schimke, bassist Gordon “Gordy” Johnson, and drummer Bobby Commodore, who also doubled as sound engineer. Rhodes said he was happy Williams was at the event and that it was a blessing.

The band played swinging renditions of “Softly as in a Morning Sunrise,” and “The Christmas Song (Chestnuts Roasting on an Open Fire)” to help warm up the crowd for a cozy evening that not only celebrated BMA’s 25th anniversary, but also ended up being a showcase of hometown talent. 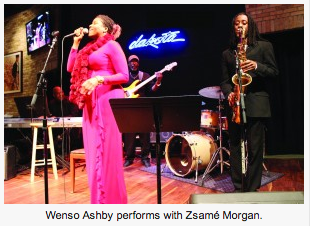 Longtime Black Music Awards stage director and Senator Bobby Joe Champion, and Summit Academy OIC leader Louis King were among the event’s attendees. From the stage, Rhodes alluded to the awards program’s return in 2013 after a brief break.

North Minneapolis resident Naima Richmond, who attend the event with her daughter Pamela, said, “I think it’s nice. The reason why I think it’s nice is because it’s open up to the public — to anyone — which means that they have an interest in the community and they are spreading their good feelings about having been around — what is it — 28 years? That’s longevity, I think. And also it helps us to understand that we as a people are doing beautiful things. And we’re sharing that accomplishment with others.”

Other musical highlights included the Grammy Award-winning vocalist with the Sounds of Blackness, and an excellent vocalist in her own right, Jamecia Bennett singing spirited versions of Jill Scott’s “A Long Walk,” and Sade’s “The Sweetest Taboo,” which featured bassist LaSalle Gabriel, whom Rhodes said he has worked with and has known for 20 years. Holding court was the house band, bassist Eric Yates, keyboardist David Billingsley, and Brandon Commodore on drums.

Another high point featured guitarist Paul Metsa along with vocalist Willie Walker presenting their stirringly soulful take on Sam Cooke’s “A Change is Gonna Come,” following vocalist Mary Harris who joined them to deliver her own uplifting “People Get Ready” cover.

But perhaps the biggest standout of the event’s roundup of local talent was singer-songwriter Ashley DuBose, which Rhodes referenced as an “emerging artist and rising Twin Cities talent.” After giving the audience some background on her life and music, DuBose sang an impressive original composition, “Guilty,” and “Life Goes On,” as some audience members joined in, obviously familiar with the lyrics to the songs.

Pete and Kimberly Rhodes wrapped up the BMA anniversary event with cake, a special thank you to the BMA’s first program director Spider J. Hamilton and a happy birthday sing-a-long for Kimberly.