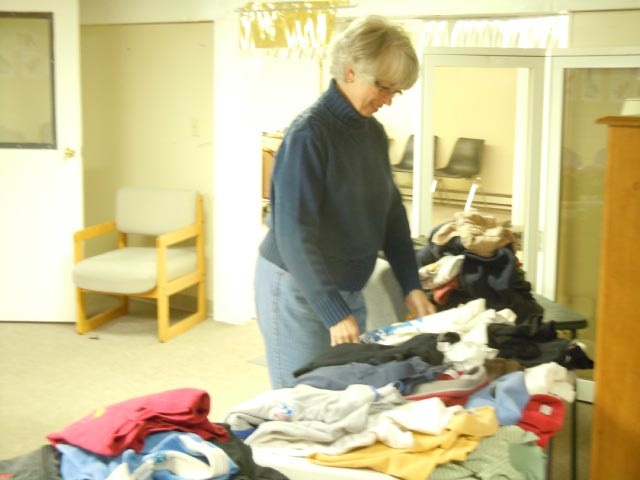 A volunteer folds clothes at FOCUS.

Though charitable giving in the Twin Cities has dwindled, the Orthodox Christian community has established its first organized charity ministry in Minneapolis.

Fellowship of Orthodox Christians United (to) Serve-Minnesota (FOCUS), a documented non-profit organization, first began in April of 2010.  By August of the same year, FOCUS had raised enough money to rent space in a basement at 1600 E. Lake St. in Minneapolis.

FOCUS opened with two simple objectives: to provide a hot meal at least twice a month and to provide donated clothing, coats and shoes to those in need.

The charity is run by volunteers like Salemi Khori, a sophomore marketing major at the University of Minnesota Twin Cities who acts as liaison to the parishioners of St. Elizabeth Orthodox Church in Eagan.

“Anytime something is needed or asked for, it just shows up. It’s really great,” Khori said.

The economy doesn’t seem to have affected charitable giving where FOCUS is concerned.  Funded by both donations and FOCUS-North America, FOCUS-Minnesota is “blessed” with huge support, Khori said.

“Right now people want to be smart with where their money is going,” Vera Proctor, the director of FOCUS, said. “My response to them is to come and see. When they do, their generosity is overwhelming.”

There has been no shortage of volunteers at FOCUS, as Orthodox churches or youth groups in the metro area provide and serve the meals sit-down style every other Sunday.

“So many don’t have the means to go out to restaurants to eat, so we want to give them the opportunity to relax and be served for once,” Proctor said. “As Orthodox, eating is what we do. So if there’s one thing we can do, it’s feed people.”

The service model of FOCUS is also different than most charities of its kind. Volunteers are instructed to serve each individual their own plate.  After everyone is served volunteers take a plate themselves and sit down to eat and interact.

Though FOCUS is an Orthodox Christian charity, secular groups such as Medtronic and Women, Alcoholics Anonymous, Infants and Children (WIC) have hosted events at the new FOCUS center.

The Clothing Closet is open Friday mornings from 11 a.m.-3 p.m. The idea is to provide people with donated clothes, coats, and shoes who might otherwise have trouble affording it for themselves.

“Most people receive very humbly and graciously. But there are a few who come in ashamed and reserved, they just take what they need and leave,” Khori said.

Proctor plans offering even more services in the near future.  She hopes to partner with the University of Minnesota School of Social Work to have M.B.A. students complete their service hours at FOCUS.

“Our motivation is a call to serve. Others may do it for different reasons,” said Proctor. “The point is to love.”

Dinner on November 14 ran out within the first hour and a half. There were about 90 people served, Proctor said, a milestone in the program. Families were asking if they could sit on the floor.

That is why the dinners are served Sunday nights.  Many food kitchens do not cover weekend meals.

With the support FOCUS is receiving from the neighborhood and metro Orthodox churches, Khori thinks it’s only a matter of time before FOCUS is open seven days a week.  Proctor agrees.

“It’s like the Beatles said: All you need is love,” Proctor said.