The University of Minnesota will become a smoke-free campus this summer.

The change will come more than a year after the University Senate passed a resolution calling for a smoke-free campus, which University President Eric Kaler said he supported.

“The University of Minnesota is committed to promoting and protecting the health and well-being of all campus community members,” the new policy says.

The policy doesn’t ban smoking inside vehicles on campus. With the pre-approval of the University’s director of Environmental Health and Safety, smoking will also be allowed as part of research studies, traditional Native American ceremonies and theatrical productions.

Smoking is already banned on the University’s Crookston and Duluth campuses. Currently, smokers on the Twin Cities campus must stay 25 feet away from University buildings. 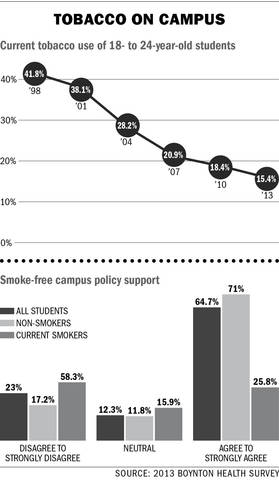 Last year, some students questioned whether the new policy could be easily enforced.

Dave Golden, director of public health and communications for Boynton Health Service, told the Minnesota Daily in May that most campuses use communication and social enforcement to make smoke-free policies work.

Less than 3 percent of students on the Twin Cities campus reported daily tobacco use in Boynton Health Service’s 2013 College Student Health Survey. In that survey, nearly two-thirds of students said they supported a smoke-free campus policy.