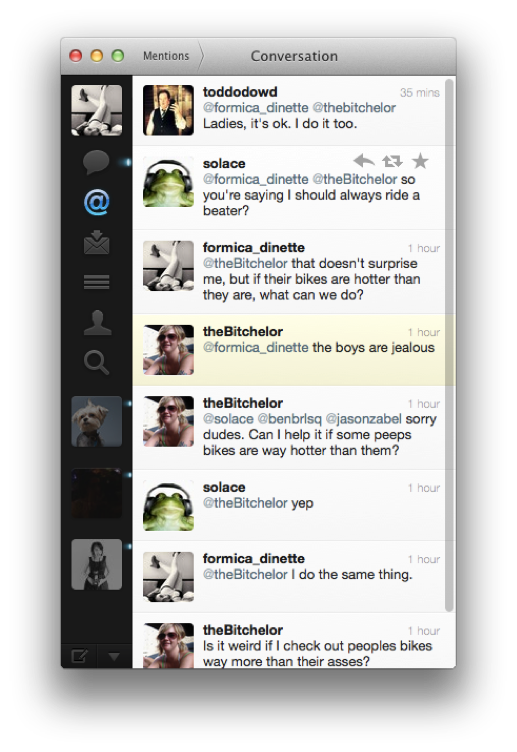 I’ve been planning to write about biking at some point, and after racing in my first alley cat this weekend, I decided this was an optimal time. One of my favorite things about the Twin Cities is how bikeable it is here.

Also, as I said on Titter this weekend, I love nothing more than hot boys on bikes. However, thinking about that statement, I was wondering whether I like the boys on bikes better than the bikes (with boys on them or not). I think I check out bikes around the cities more often than I check out men. When @theBitchelor tweeted about “checking out people’s bikes more than their asses,” I definitely could relate.

After the age of eight or so, I didn’t bike until after college. But hey, it’s like riding a bike! Somehow I made friends with a bunch of folks who zipped around everywhere by bicycle, biked through winter with icicles growing from their beards and coming out of their noses, and didn’t own cars. I started biking more and more and every year, and this year I am planning on joining the crazy kids in their wool undies, travelling on two wheels through the winter. I am totally in it for the fuzzy-eared helmet insert that I’m going to buy for my Bern. Some of my hard-core biking friends looked at me funny (digitally) when I revealed my fluffy-eared motivation on the bookface, but I think if it gets me on my bike when there is snow on the ground, it’s totally legit.

Having spent nine cold and sometimes miserable winters here in Minnesota, I’m ready to try something new to reduce my dread about the changing of the seasons. I’ve always said that if Minnesota had better winters, there’d be too many people living here. The Twin Cities are such an amazing place to live; we need some sort of population control. I’m hoping that I can learn to love the winters like all the people who snowboard and get super giddy about the end of the beautifully hot Minnesota summer. So am I ready to trade in my days at the beach with @lizbastian for winter bike rides? Definitely not. But I’m hoping to bring a little bit of the summer biking fun into my going-home-after-work-and-never-leaving winter state of mind.

That being said, I want to share some of my favorite Twin Cities cycling groups and events:

If you aren’t a seasoned rider and want to get into bicycling, check out @30daysofbiking, @GreaseRagMpls, or @mplsbikelove; or visit one of the awesome local bike shops (One on One, The Alt, Freewheel, The Hub, Behind Bars, Calhoun Cycle, etc). There are so many people in this city who are knowledgeable and excited about biking.  The more I ride, the more I love it and the more I get to explore the Twin Cities in new ways and meet tons of super neat people. Don’t have a bike yet but want to join the fun? Hop on a Nice Ride!