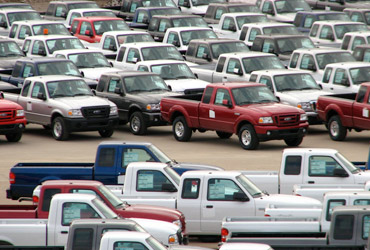 This week, even as the Ford Twin Cities Assembly Plant in St. Paul keeps winding down to an expected year-end closure, 22 new employees are beginning orientation and training. By Wednesday, they’ll be on the assembly line full time.

This is part two of a three-part series. Read part one here.

How many will stay, for even the five months left in the plant’s life, “is a big question,” said Paul Shropa, United Auto Workers Local 879 president. “Assembly line work is hard. Most of them just don’t stick it out.” Eight out of 10 previous recruits this year didn’t, he added.

Since 2006, when Ford first announced plans to shutter the 1920’s-era factory, life on the production line has been one strange development after another. More than 1,000 workers took buyouts, but when Ford delayed the shutdown hundreds returned, many at reduced pay and benefits. So-called “temporary part-time” employees have been there for up to five years, working 40 hours or more most weeks.

“Legacy” workers with long seniority still get about $28 an hour, excellent benefits and transfer options to Ford plants in Chicago and Louisville, Ky. More than 200 others earn between $15.20 and $18 an hour—adjusted for inflation, little more than the $5 a day Henry Ford paid in 1914—with fewer benefits and uncertain prospects for transfers or severance pay.

Union contract concessions to management and fluctuating sales of the Ford Ranger compact pickup trucks produced at the plant are behind all the confusion. When gasoline prices rise, so does demand for Rangers with their fuel economy of up to 27 miles per gallon.

That’s why the Ranger, basically a dated 1992 design that’s slated to be discontinued when the plant closes, keeps outliving its death notices. Its sales jumped 14 percent in June, Shropa said. So Ford is hiring again to squeeze the last bit of profitability out of the venerable little pickup. Through June, the plant produced 52,272 of them.

But the 86-year-old factory remains on the chopping block because of its age—second only to Ford’s historic 1915 River Rouge complex in Dearborn, Mich., which is getting extensive updates—and probably its Upper Midwest location too distant from most of the U.S. market. Transport costs have rendered Minnesota less competitive for manufacturing heavy products such as motor vehicles than more central and heavily populated parts of the country.

Meanwhile, however, the St. Paul plant’s 768 remaining UAW members—down from a peak of 4,000 in 1987, according to Ford spokeswoman Marcey Evans—keep churning out 52 Rangers an hour. And that depends on hundreds of workers repeating each part of the assembly process correctly in the alloted 69.23 seconds. If just one slips up in this amazing collective effort, production lags.

“It’s more demanding than any other job I’ve had,” said Brett Hoven, 26, a “temporary part-timer” since 2007 who attaches Ranger tailgates and hood prop rods full time. “You’re on your feet for 9 hours and 10 minutes a day. But it’s also the best pay I’ve ever had.”

The plant, which dropped its second shift in 2006, recently has run a single shift for four or five 10-hour days a week. Workers previously were entitled to two 30-minute breaks each day, but the latest UAW contract trimmed one of them to 20 minutes.

In addition to long hours on the job, many workers are preparing for life after Ford by taking dislocated worker training and workshops in green manufacturing provided by the UAW, Ford and the U.S. Department of Labor. But they’re drawing the line at quarterly company town hall meetings that Local 879 Chairman Jim Eagle said are “about how well Ford Motor Co. is doing while not including us in their plan.”

That, he added, “is like rubbing our pending closure in our faces. I have asked the plant manager to talk to her boss and not hold them anymore at Twin Cities Assembly.”