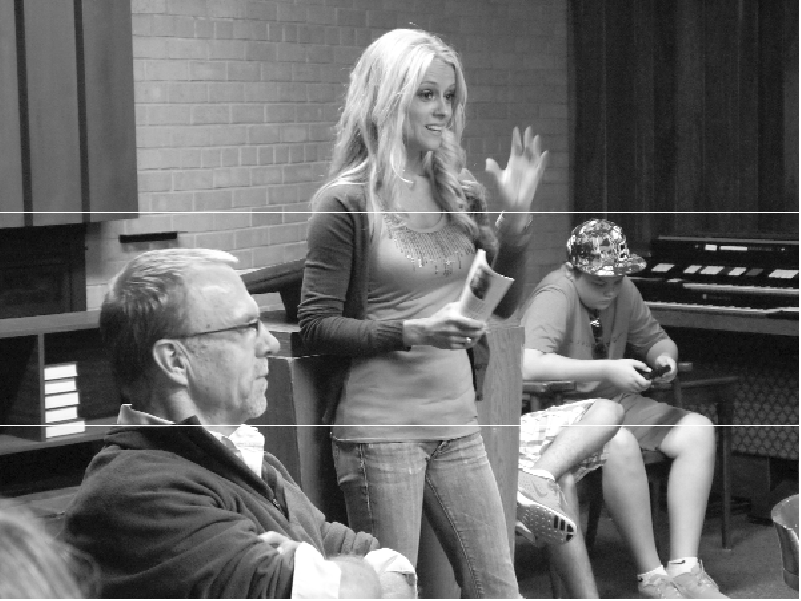 Nicole Curtis, originally from Detroit, told a Jordan neighborhood listening session she feels it’s her mission to save old houses. She does a lot of her own work, on site every day. This has the added bonus of letting her meet neighbors who may have background on the house or want to help restore it. She’s exploring renovating 1522 Hillside Avenue, which is listed in city records as having four 2-bedroom units, a one bedroom and two studios. (Photo by Margo Ashmore)

Will “Rehab Addict” Nicole Curtis put 1522 Hillside and North Minneapolis on the map among her successful home improvement projects?

The HGTV and DIY network star told the Jordan Area Community Council’s listening session Aug. 16 that not only does she want to make the hulking multi-family structure her next conquest, but she’s asked other contractors she knows to join her in conquering the “secret” list that city officials have, of properties they plan to have razed in the next year.

She describes her formula as renovating properties in less than 120 days, under budget, using reused, recycled, salvaged materials and returning homes to close to their original character. For example, Curtis said she would tear off the back addition to the Hillside property.

A nearby neighbor asked how she would take care of the poisonous materials likely to be generated. “We’ll take care of it in a sensitive way. If I’m slapped with a big abatement bill, I’m out. But we do take care.” She mentioned asbestos siding, mold, and lead as common in old houses. “We test. The last house didn’t have lead.”

The last house is 3049 Third Ave. S., in the Central neighborhood. There, North Minneapolis activists Connie Nompelis and Brian Finstad, both former Central residents, cajoled her into looking at the North Minneapolis house; city-owned, she said it was going to be demolished on a Monday and she saw it the previous Friday. “I just had a good vibe when I saw it.”

Curtis said the city is working on the paperwork that would allow her to buy it; a code compliance agreement would be needed (in which the city staff and she agree what will be fixed).

How does a Rehab Addict project work? Curtis said she is on site every day, “the show is filmed every day, I don’t just pop in.” She said she likes to hear from people in the neighborhood, their ideas and even old family photos which might give her a glimpse of the house in its original state. “The more the community talks about it, the more we find out about.”

Volunteer labor often helps. Curtis said she schedules one volunteer day “and then it goes from there. This project will be what you make of it. This will get you national exposure” to 16 million fans. “It brings more people to the neighborhood. People come and get their photos taken in front of” her homes.

She said Central Neighborhood took their advertising budget and spent it on “the dollar house” (3049 Third) because it would create good publicity for the neighborhood. It is listed in city records with Neighborhood Housing Services as owner and Nicole Lynn Curtis as taxpayer. Central’s housing chair has not yet returned a NorthNews request to confirm the extent of the neighborhood’s involvement.

But reportedly the Rehab Addict project was a factor in the recent decision by a private party to purchase and renovate one of the homes on the “Healy Block” not far away.

Those who have access to the DIY and HGTV shows may know all the details of the Rehab Addict’s experience with 3049 Third. She told the JACC session the property is close to ready to market to a new buyer. City records show that on Aug. 22 the following work passed inspection: new furnace, new plumbing including addition of a powder room on first floor, $39,300 in general remodeling to address the code compliance inspection and remodel the existing kitchen. Previously, she lifted the house and put in a new basement cement block foundation with concrete footings, costing about $18,000.

The first of the foundation permits was issued May 18 of this year; looks like Curtis is on track to meet her 120 day goal for completion and, possibly, sale.

Curtis said Hillside would be her “9th or 10th house” and her website, www.nicolecurtisdesign.com says she is also available to consult on projects other than her own.