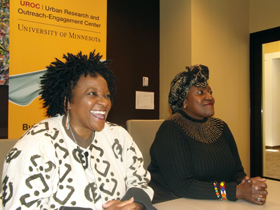 South African Archbishop Desmond Tutu is revered a symbol of strength and courage during a time of great strife and upheaval.

During one of the ugliest periods of human history – South African apartheid – guided by his faith, Tutu stood firm against the oppressive rule by white South Africans. Tutu’s nonviolent resistance is credited with bringing the cause of Black South Africans to the world stage, and during that time of great oppression, Tutu’s faith seemingly never wavered.

Tutu’s daughters, Naomi Tutu and Thandeka Tutu-Gxashe, faiths were also tested during the struggle for freedom. But both claim it was their faith in a higher power and a greater calling that helped them get through such horrid times. The two were in Minneapolis to discuss faith in times of despair and to share their perspectives with the residents of Minneapolis – north Minneapolis in particular.

The Tutu sisters were in the area as a part of the University of Minnesota Urban Research and Outreach-Engagement Center (UROC) Critical Conversations series. The purpose of the visit was to examine the role faith, consensus-building, and reconciliation play in healing a community spirit that’s been wounded by violence, natural disaster or catastrophe.

And though daughters of a man of the cloth, the sisters admitted that at times they, like many, have had reasons to question their faith. But the Tutu sisters said ultimately, their faith in God prevails.

“I know there are times when I have questioned my faith,” said Naomi Tutu. “My father told me it’s completely OK to be angry with God and to let God know when you’re angry. We know that it doesn’t make God push away from us.”

Naomi Tutu said when people begin to question their beliefs in God, it’s not another person’s job to scold them for questioning, but the job is to support them through their period of questioning.

“When someone questions God, as a caring human being, we need to give that person our support and allow them to go through their process of understanding their faith,” said Naomi Tutu.

Naomi Tutu, who is a human rights activist focusing on race and gender, said being a person of faith does not mean life will always be easy but, that a person with faith can persevere through times of hardship.

“Faith does not guarantee that only good things will happen to you, but rather in those dark places, you are not alone,” said Tutu. “This is the guarantee that faith gave me; that as a person of faith I could remain strong and loving through all of that dark time (of apartheid).

Tutu-Gxashe said when evil occurs, whether it is the Boston Marathon bombing or a homicide in North Minneapolis, it is important to not blame God, but the perpetrator of the deed.

“God was not the one who held the gun or put the bombs together; that was a man who did that,” said Tutu-Gxashe. “Sometimes you don’t give God credit for some of the good things that happen; you shouldn’t blame God for the bad.”

Naomi Tutu said as human beings, we have free will and it is that free will, not God that can cause a person to do heinous things. Conversely, she said man’s free will can be to commit good, positive acts.

“It (free will) can be used for amazing good or amazing evil,” said Naomi Tutu.

In the sisters’ visit to the Twin Cities, the two cautioned against being called experts in the conversation of faith.

“There’s no way I’d consider myself an expert, but like anyone else, I have advice and an opinion,” said Tutu-Gxashe. “We’re here to have a conversation and in conversation, if it’s one-sided it’s no longer a conversation. The people here also have something to offer to us.”

UROC Critical Conversations is a series of public discussions bringing together scholars, activists, historians, artists, and community leaders on urban issues and ideas.