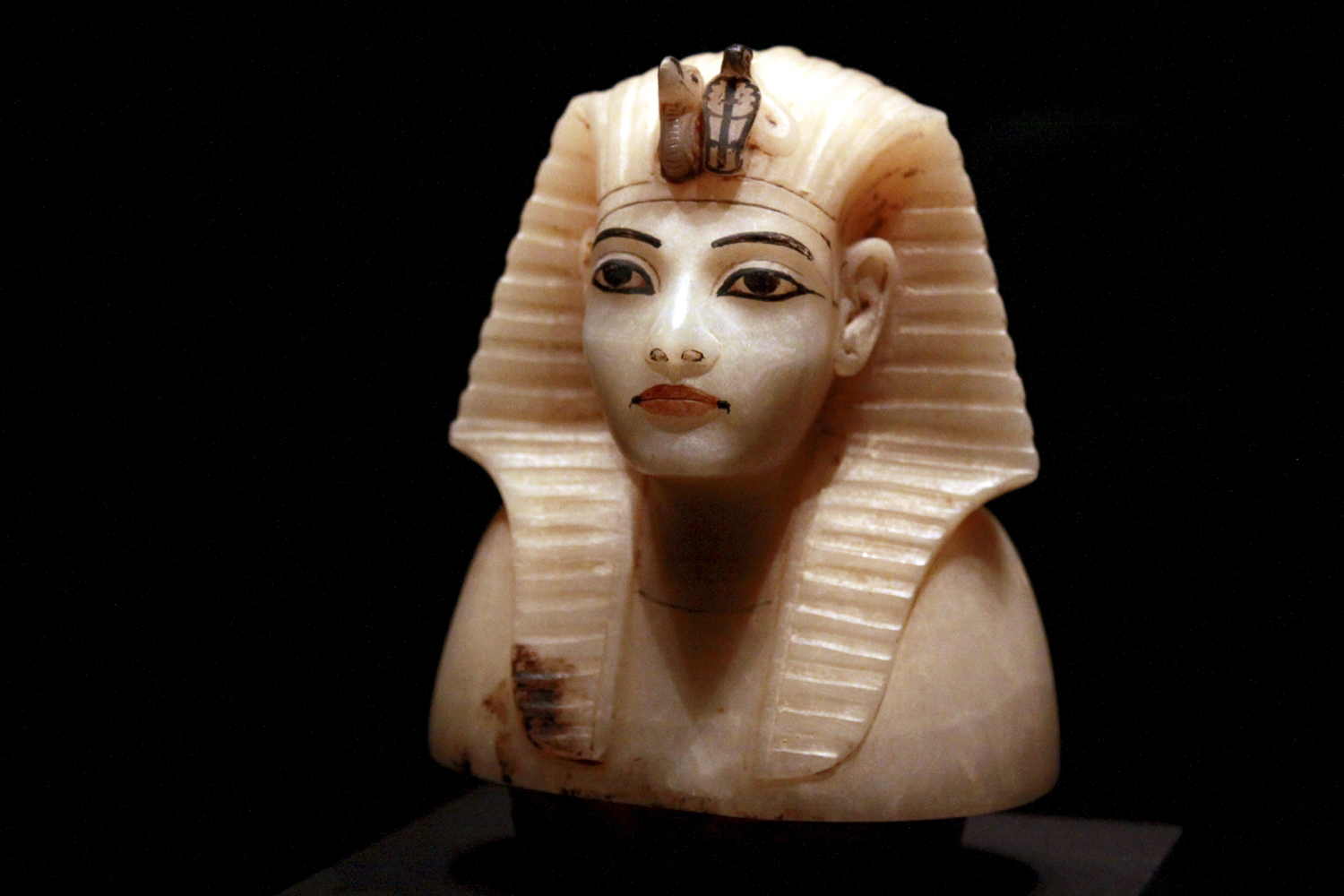 My mom shivered with anticipation when the doors to the special exhibition Tutankhamun: The Golden King and the Great Pharaohs opened at the Science Museum of Minnesota. I told Mom I was surprised at how excited she was. “Of course!” she exclaimed. “This is King Tut! The king of all kings! The bling of all blings!”

The first thing you need to know about this much-heralded traveling exhibit is that you get the bling but not the king: the actual mummy of Tutankhamun remains in its Egyptian tomb, though the exhibit concludes with a close replica of the king’s preserved corpse. Nor are any of Tut’s multiple sarcophagi visiting; the closest thing is the elaborately inlaid gold coffinette (yes, that’s actually what they call it) that held Tut’s embalmed stomach. So the exhibit does have something of the feel of a party thrown by someone who forgot to show up…but given that the king’s been dead for 3,300 years, even my aunt Judy forgave his poor manners.

In recent years, the bar for a blockbuster archeological exhibition has been set by the extraordinary Titanic exhibit that stopped at the Science Museum in 2009. The low bar, on the other hand, was set by the confusing Dead Sea Scrolls exhibit that came through last year. Tutankhamun falls somewhere in the middle: it’s much more accessible than the Dead Sea Scrolls installation, but not nearly as compelling as Titanic: The Artifact Exhibition.

The Tut exhibit is epic in scale, featuring over 100 artifacts from Tut’s tomb and related sites. Its presentation is logical and lucid, beginning with a general orientation to the 3,000-year reign of the Pharaohs, which ended—I had to Wikipedia this—in 31 BCE, when Egypt came under the rule of the Roman Empire. We then learn about the 1922 discovery of the tomb, which Harrison Ford, as narrator of an introductory video, definitively calls “the greatest archaeological discovery of all time.” (A little Googling suggests that general consensus puts the Dead Sea Scrolls above Tut in the rankings of archaeology’s all-time greatest hits, but whatever.) Finally, we walk through a sequence of rooms that contain, in turn, artifacts from the four chambers of Tut’s tomb.

There’s no question that this is an extraordinary collection of artifacts, and in this installation they are beautifully presented. That said, the jaw-drop factor here is modest. For the uninitiated, this exhibit is not going to be dramatically more impressive than a visit to the substantial holdings of ancient artifacts at the Minneapolis Institute of Arts, admission to which happens to be free; those who aren’t members of the Science Museum will pay a whopping $30 each to see Tutankhamun. (That price includes admission to the Science Museum’s regular exhibits, and partially supports antiquity preservation in Egypt.) Unless you—or your kids—know enough about ancient history to really appreciate the special significance of these artifacts, that’s a price point that makes this exhibit hard to recommend for the average family.

The exhibit is accompanied by Mummies: Secrets of the Pharaohs, an unusually absorbing and informative Omnifilm. The film presses a little hard on its point that DNA from ancient mummies may help to understand malaria and other diseases that were deadly then and remain deadly now, but overall the film is very effective in packing a lot of information about Egyptian culture into less than an hour. My family and I agreed that you’ll definitely want to see it if you are planning to see Tutankhamun, and that you should plan your visit so that you can watch the film before you walk through the exhibit.

As we walked back to the car, I asked Mom what she thought of the exhibit. “Well,” she said, “it was okay. Frankly, I was expecting a little more gold.” Sorry, Tut—if you want to keep the interest of those New Ulm farmers’ daughters, you’re going to have to flash a little more of your stash.