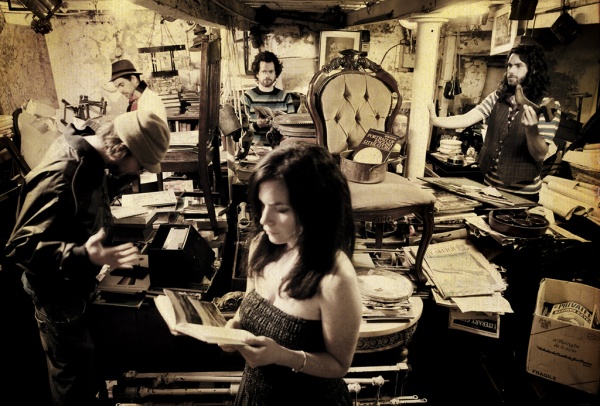 London six-piece folk collective Tunng played a very rare US show at the Walker Art Center’s McGuire Theater on Saturday night. The band consists of two guitarists/vocalists; a female vocalist; a keyboard/synth player; a percussionist who played various shakers, chimes, etc.; and a traditional kit drummer. I honestly expected their music to be a bit more experimental live, but their music is very much still pop music, just played with mostly folk instruments.

Early on, guitarist/singer Mike Lindsay took a sip of his beer and commented “great local beer, Summit…cheers”, which got a nice cheer out of the 2/3-full crowd. A while later Lindsay stated that the band had a nice time visiting the “Mill Tour” and explained how they watched a ship go through the locks, only to turn around and go the other way after a half hour in the lock. A good chunk of the show drew from songs off their 2010 album …And Then We Saw Land, including the encore opener, an a cappella version of “These Winds.” They closed their 70-minute set with a spirited version of “Woodcat” off their 2006 album Comments of the Inner Chorus.

Fairly last minute openers, and fellow Thrill Jockey label mates Sam Prekop and Archer Prewitt of the Chicago band The Sea & Cake played a lovely but rather low-key and mellow 40-minute set highlighting a handful of songs from their new six-song album The Moonlight Butterfly which was just released on May 10th.

Early in the set Sam explained that he was fighting a bit of a cold, which explained why he was even less talkative/mellower than usual. I was hoping for maybe a song or two off of Archer’s incredible last solo album, 2005’s Wilderness, but they did at least play “Something” off of Sam’s equally great 2005 album Who’s Your New Professor. The set highlight for me was definitely “Middlenight” off The Sea & Cake’s 2007 album Everybody.