It appears that the Thursday night cash mob on University is becoming a tradition. Last Thursday’s was at The Best Steakhouse on the southwest corner of University and Victoria. (Shout out to Noel Nix for the excellent suggestion.) I hope this tradition sticks around through construction season, if not beyond.

Even with its auspicious name, I had never eaten there. It’s a classic diner where the short-order cook is cooking your food at arm’s length from the bar.  I like an open kitchen, and it all the more exciting with a steak restaurant as the flames often come up from the grease. 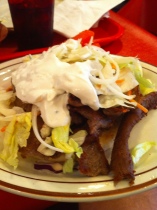 The pan-fried steaks looked huge and tempting, but it had been a while since I’d had a gyro so I went for that. After all, it is a Greek family that runs the place. The meat was wonderfully tender and not too greasy, which is often the downfall of the gyro. Like the steaks, the portion was quite large and I might have gotten away with splitting one plate. The kids went with a fish sandwich and chicken tenders that they enjoyed, but what they really loved were the fries.

There is no dearth of diners in Saint Paul, but the Steakhouse is easily up there with the best. Next time, I’m going for the steak and baked potato.