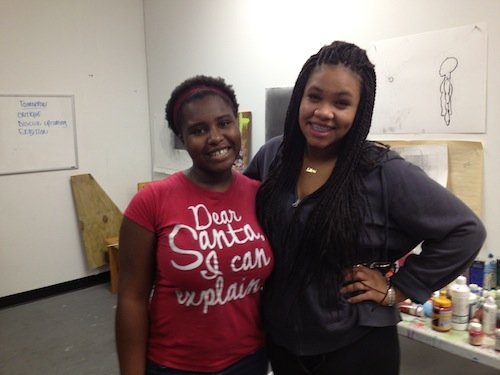 On Friday, I met four young artists and several working artists who are associated with Juxtaposition Arts (JXTA) as part of a panel called “In The Mix”, sponsored by JXTA and KFAI. The discussion centered on public art and community, and it was just great to hear the perspectives from the young people about the topic, but also just hear about their experience with the program, where they are building skills in artmaking while also earning money as apprentices.

I was especially delighted to reconnect with Tyanna Williamson, whom I had interviewed at the end of the 2011/12 school year, when she attended North High School. I remember I had talked with Williamson about her future plans and that she had worked with JXTA, and it made me so happy that she’s going to school at MCTC and continuing to pursue her art at the arts organization.

The other students were two young women, Jahliah Holloman and Cameron Downey, and a young man, Namir Fearce. The young artists were joined by Choreographer Kenna Cottman, of Voice of Culture, and visual artists Sam Ero Phillips and Caroline Kent, who teach at JXTA.

One of the topics covered by the forum involved a program that the students participated in last summer, in which they created paintings with text (such as “what morally” and “silverTongueGoldenwords”, “Radiant POWER” and “Earth Atmosphere Neighborhood.”) The words of each painting had specific meanings, both in the words themselves and how they were placed and the colors used. For example, the “what morally” piece was inspired by Trayvon Martin, and as one audience member observed, has the black text on top of white canvas. For the public art portion of the work, the young JXTA artists would wheel these paintings to various locations, mostly around the neighborhood, in order to instigate conversations.

It was fascinating hearing how this played out. The young people talked about how people would look at them as if they were crazy, but that ultimately, they were able to engage people in conversations, or if not, at least take a step back and let neighbors experience the work for themselves.

“I was looking for a sense of trust,” Namir Fearce said. “I don’t want to intrude on people’s space.” Part of what lent itself to that trust, he said, was that as an organization, JXTA had been able to establish itself and it’s place as a force of good in the community.

That seemed like a really smart thing for a 15-year old to say, and it’s a piece of advice that all public art practitioners could hear, whether they be associated with neighborhood-based organizations or larger institutions.

His statement speaks to art as a two-way conversation between the artists (and organizations/institutions that support them) and the community to which it’s being presented. That means creating relationships, and as Sam Ero Phillips pointed out, that relationship can be broader than just about art. He noted that JXTA artists also have helped out in the community in other ways, whether that be helping pick up leaves or other such tasks. Those kinds of relationships are actually more attainable by a smaller organization based in a neighborhood, rather than a larger institution, even if the larger institution has more resources.

Don’t get me wrong — I think we need big institutions too, and I know the Walker and the MIA do engage in outreach efforts with youth and different communities. Still, I wish there was a bit more collaboration or sharing of resources between the big institutions and these smaller organizations that are reaching people that don’t necessarily ever go to museums.

If you’re interested, you can listen to the condensed version of the panel discussion on KFAI’s minneculture sometime in January.