What do you call it when you go out for dinner, but not to a restaurant, and it’s not anybody’s wedding or bar mitzvah, but the food has a theme, and there’s live music that matches that theme, and it’s in a place where dinner isn’t usually served?

I posed this question to a few foodies around town, and they said, “Hmmm.” Heidi Andermack of Chowgirls had lots of suggestions: experiential dining, pop-up dinner performance, pop-up dining experience, or, most endearingly, one-night stand. The folks at Create Catering opined that it might be simply a pop-up restaurant.

According to such irrefutable sources as dictionary.com and Wikipedia, however, a pop-up is “a store or restaurant that temporarily takes over a vacant space and does business there for a short time” — and this was not that. “Pop-up” also implies skirting the law a little, like an underground restaurant, or an occasional dinner event sponsored by young show-off chefs hoping to get noticed. But the event in question, which was billed as “Troubadour’s Table,” was not those, either. 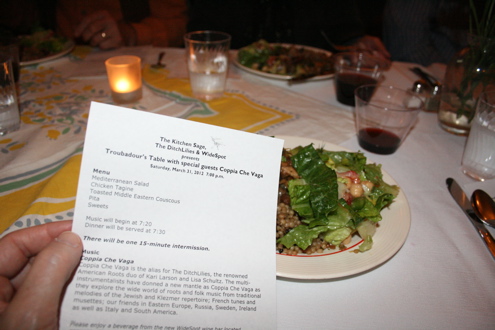 “It’s sort of a European bistro music dinner night,” said Lisa Schultz, one of the musicians.

“It’s, you know, a fun…thing,” said Kelli Tatum, who runs the venue.

Of course, it’s not unusual to have an event where there’s both food and music. The reason I’m looking for a definitive term is so that I can discuss it properly and recommend it to others. “Hey, I went to this fabulous ___ the other night,” I’ll say. “Have you been to a ___ recently? I can’t wait for the next ___!”

So let’s just parse it out, and you can decide what it’s called, and then it will be a thing, and we’ll all go to several of them per week, and our lives will be very happy.

The elements were as follows. 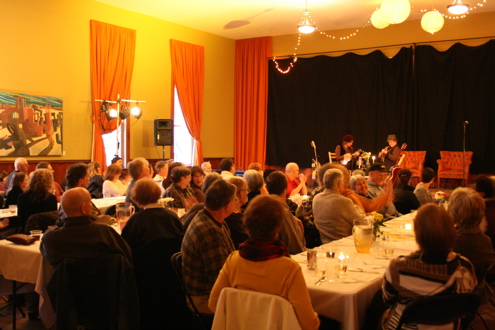 “I was worried that the room would go totally silent when the music started,” said Kelli Tatum, executive director of the Widespot and producer of the event. “People in a performance hall are used to sitting quietly and listening. But that was not the concept for the Troubadour’s Table.”

The original concept came from the DitchLilies — Kari Larson and Lisa Schultz — who wanted to expand their musical repertoire from Americana to old-world European. “For years, we’ve been stockpiling songs we want to learn: music from Italy, France, and any kind of sweet, folky European melody,” Lisa said. “We figured if we had an event to prepare for, we’d quit procrastinating and just do it.” 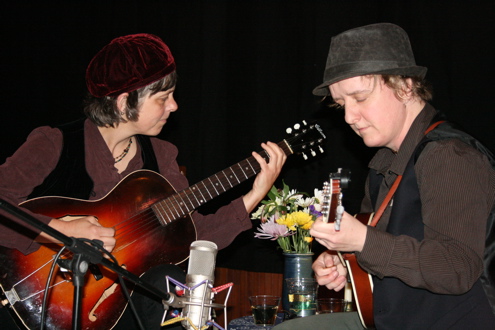 They re-christened themselves “Coppia Che Vaga,” which is vaguely Italian for “a couple who wander about.” They got out their mandolins, guitars, and ukuleles and started practicing. Then they pitched the idea to chef/caterer Linda Harding.

“Kari and Lisa suggested having a bistro-style dinner, where the musicians sit right there with the diners,” said Linda. “They described it as kind of like a French cafe. I was in. All we needed was a venue.” Linda had done a successful dinner event at the Widespot last year, so she figured Kelli would be up for something like this, despite the fact that the Widespot has no kitchen facilities. 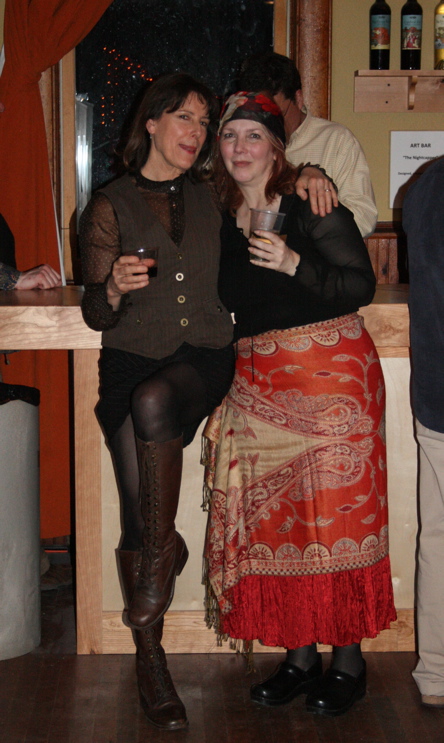 “We want the Widespot to be a place where artists stretch themselves beyond their comfort zones,” said Kelli, a former punk rocker and theater geek who knows first-hand about artistic comfort zones. “I liked this music and dinner idea, because we’d all be doing something new. The DitchLilies were learning a new kind of music. Linda was working within different constraints of budget, theme and capacity than she usually does. For me and the Widespot, it was a challenge to market this thing in a way that it would be affordable, and provoke curiosity — and so I wouldn’t freak out, basically.”

“At first, we couldn’t wrap our brains around what the event was about, the music or the food,” said Linda. “But we stuck with the French bistro idea, and things gradually came together.” She rented kitchen space at Nesbitt’s Oasis Eatery near Prescott and did all the cooking herself, with some help from her loyal spouse, Fred. As word got out in the community that this event was in the making, others pitched in as well: Harbor View chef Judy Krohn asked, “How can I help?” There was definitely a team spirit propelling things forward. 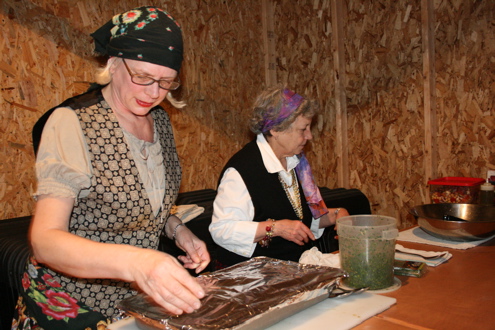 Linda Harding, left, with Judy Krohn, in troubadour-ish outfits for the occasion

They didn’t have a precedent for how to price the event. All of them wanted it to be “affordable,” but that’s a relative term. Linda worried that there wouldn’t be enough money to pay for the kind of food she was imagining, so she wanted to charge more. Kari and Lisa worried that no one would pay money to hear a local band trying out unfamiliar music, so they wanted to charge less. Kelli figured out how much the Widespot would need for promotion, added up all the food costs, and settled on the magic number of $17. Everyone got paid; no one got rich.

From the customer’s point of view, it was quite perfect. Linda’s splendid version of chicken tagine, which for logistical reasons she made in regular hotel pans rather than those big hat-like things, was zingy and flavorful in its sauce of garlic, onion, tomato, preserved lemon, cinnamon, parsley, cilantro, ginger, saffron, and lots of olives.

“It was the first tagine recipe I ever used, and I still think it’s the best,” said Linda. She’s tried it out in numerous places: her culinary talents have led her from her hometown of Mora, Minnesota to Colorado, New Orleans, Maine, Texas (where she picked up a B.F.A. in fine arts, because, why not?), Los Angeles, south Minneapolis, and now to Maiden Rock, Wisconsin, where her cooking school looks out over the Mississippi River to the bluffs on the Minnesota side. She worked in the “Natural Foods” department of Lunds/Byerly’s for awhile, and she’s still very picky about sourcing her ingredients. She got the chicken from Larry Schultz Organic Farm in Owatonna, and most of the other ingredients came from the eclectic Bill’s Imported Foods in Minneapolis, one of Linda’s go-to suppliers. The extremely fresh salad greens were from Stockholm-area A to Z Produce and Bakery. 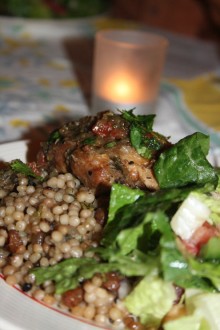 I’m not sure why, but seeing that gorgeous plate of food put down in front of me was one of the happiest dining out experiences I’ve had in a long time. The exotic aroma said “fancy-schmancy,” while the one-plate pile-on said “home-style” — my favorite combination. I can’t discount the possibility that my judgment was swayed by the friendly atmosphere: if I had been a complete stranger in this community, which I wasn’t, would everything have seemed as delightful? But everyone seemed to be as charmed as I was. I may also have been taken in by the ambience of cafe lights and candles, which gave the cavernous opera hall a cozy, welcoming feel.

And, of course, there was the music. Kari and Lisa are such accomplished musicians that I sometimes glanced sidelong at my fellow listeners to see whether I was the only one hallucinating around here. Could I really be hearing musicians of this caliber, along with a dinner of this quality, for seventeen dollars? I felt like getting their autographs on the menu so I could prove, later on, that this actually happened. Kari and Lisa play their many instruments with an entrancing technical agility. But they also seem to have both a scholarly and a heartfelt understanding of their music, from bluegrass to Italian mandolin to klezmer. They play with an earnest, direct emotion that goes straight to your heart.

Kelli Tatum was the one who came up with the name “Troubadour’s Table.” She figured it was both descriptive and reusable, in case they want to do other events like this one. Wait a minute — should that be the generic name for this type of event, then? “Hey, I went to this fabulous troubadour’s table the other night,” we’ll say. “Have you been to a troubadour’s table recently?”

Unless anyone comes up with something better, let’s just go with it. Who’s throwing the next one?

In order to not miss any upcoming events from Kitchen Sage, DitchLilies/Coppia Che Vaga, or the Widespot, you should ‘like’ each of them on Facebook:
The Kitchen Sage
The DitchLilies
The Widespot Performing Arts Center