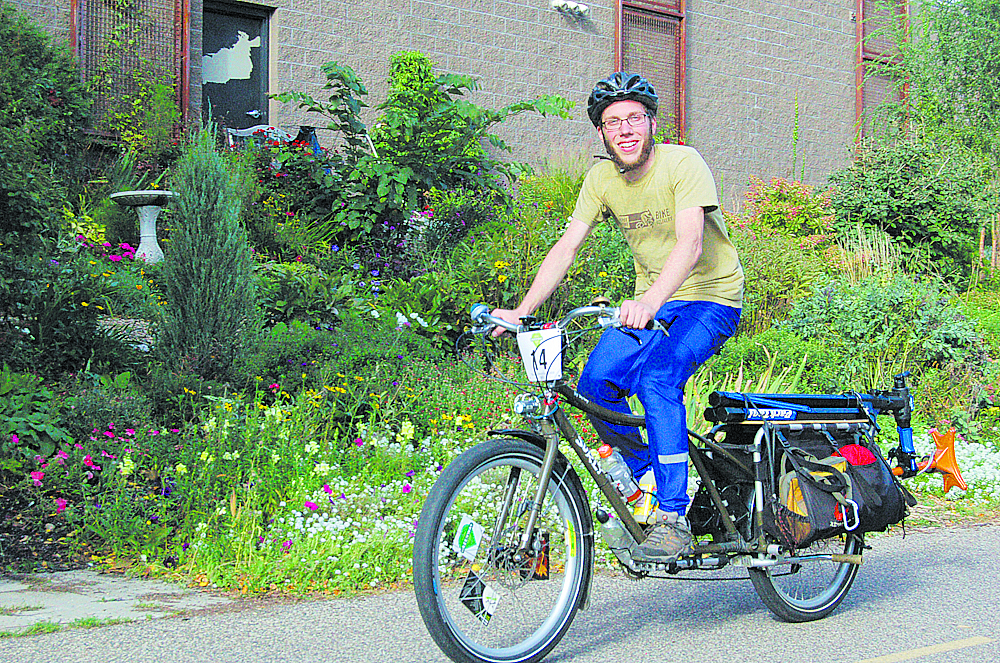 A participant passing through the Lyn Lake area in the 2010 Greenway Challenge.

Enjoy a leisurely fall ride around the chain of lakes and then come back to Calhoun Cycle at 3342 Hennepin Avenue for pizza for purchase, bikes, music, and free ice cream. The Banjo Brothers bike bag company is teaming up with the crew at Calhoun Cycle for a post Labor Day concert. The event will feature the music of singer-songwriter Ann Reed and pianist, accordionist and occasional storyteller Dan Chouinard, both of Minnesota. Ann Reed, known for her rich alto voice, smooth guitar licks and sly wit, has spent more than 25 years writing songs and making music. She has performed on Good Morning America, A Prairie Home Companion and Minnesota Public Radio’s Morning Show. Dan Chouinard grew up in a musical family in Lindstrom. He tours and records regularly with an ever-expanding roster of musicians and writers. Banjo Brothers, Civia and O2 Rainwear will also be on hand to display their brand name gear and answer questions.

Hop on your bike and take a tour of Minneapolis. Enjoy the scenic Grand Rounds Byway System at your own pace. All ages and abilities are welcome.

Parkways are closed to motorized traffic for both a short (14 mile) and a long (36 mile) route through Minneapolis. The long course spans the entire scenic Grand Rounds Byway System showcasing several Minneapolis lakes and traveling along the Mississippi River and Minnehaha Creek. The short course offers a circuit around Lake of the Isles, Lake Calhoun and Lake Harriet. Both routes include rest stops with refreshments and bike mechanics. Stick around after the ride to enjoy live music, vendor booths, post-ride food, and free beer.

Wedge resident Eric Mueller lives right on the Midtown Greenway and he is leading the charge to help keep it safe and clean. Mueller is working with the Midtown Greenway Coalition to coordinate the 2011 Greenway Challenge, a 33-mile bike-a-thon in which riders raise funds and compete for prizes. The top pledge-getters will win cycling trips to Vail, Colorado and Lanesboro, Minnesota.

Last year’s Greenway Challenge raised over $25,000, and Mueller won the grand prize by collecting over $5,000 in pledges, more than any other rider. “It was much easier than I thought it would be,” he said of his fundraising efforts. “I had a network of neighbors helping me raise money, and I reached out to family and friends. I found that if I had a chance to explain what the Challenge was all about, and how it would benefit the Greenway, that people just opened up their wallets to help out. People are very passionate about the Midtown Greenway.”

Mueller had so much fun at last year’s event that he has been working since February to help organize this year’s event. “We’ve got some great stuff planned for the event day. There will be art bikes, music, food and people riding in costumes. It’ll make the miles go by quickly.”

Riders can cycle individually or they form a team with three other friends. “We’re very excited to introduce the team challenge this year,” said Soren Jensen, Midtown Greenway Coalition’s new Executive Director. “Each rider agrees to raise a minimum of $250 in pledges, and some riders might find that easier if they’re raising money alongside their friends. Plus, it’s a great way for a team to bond through the experience of fundraising and riding. We already have ten teams committed to sign up!” enthused Jensen.

The ride is a social one, not a race. “There are cyclists of all abilities that participate in the Greenway Challenge,” said Theresa Nelson, Midtown Greenway’s Programs Manager. “Last year there were people who rode in costumes on one-speed bikes as well as Lycra-clad racers on fancy road bikes. The riders reflect the people that use the Greenway every day for exercise, commuting and recreation.”

As an incentive to riders the Greenway Challenge features prizes for the top individual and team fundraisers. The person that raises the most money will win a trip for two to Vail, Colorado for a week of cycling and relaxation. The top team will win two nights for eight people at the Scandinavian Inn, a bed and breakfast in Lanesboro, Minnesota, which is on the Root River trail, a popular cycling route.

“I had a great time doing the Greenway Challenge last year, and am so happy to help plan this year’s event,” said Mueller. “It’s great to see the community come together and support this wonderful asset to our community.”

Registration for the event is $25.