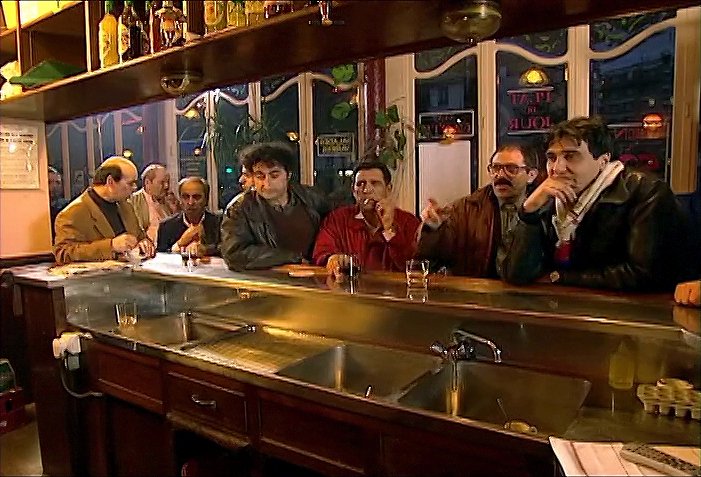 Michèle Collery and Anaïs Prosaïc, Treasures of the Scopitones, 1999. Photo: courtesy the artists.

I wish I could say it was a dark and stormy night when a mysterious package containing unknown DVDs was sent to me from the Walker Arts Center. Because, let’s be honest, it sounds more romantic. In truth, it was a cold and snowy Tuesday afternoon and I asked for those DVDs to be sent to me (even though I didn’t remember that until I received them). The two DVDs in the package were titled Toukki Boukki and Treasure of the Scopitones; I watched them both, but Treasure of the Scopitones seemed more esoteric and gleeful to me so that’s the one I’m gonna talk about.

Before I continue with a more descriptive overview of the film, I should probably explain what a scopitone is. A scopitone machine is a type of video jukebox that hosts 16mm film components, and, in a sense, was the godfather of the modern music video. The scopitone videos in question here feature North African performers (namely from Algeria) who made these videos during their struggles as recent immigrants to France. Treasure of the Scopitones reunites the stars of these videos and their families at a local café to watch and reminisce about these 1960s vintage gems.

I slipped this DVD into my player completely blind and without any context. And even though it was kind of fun not knowing what I was stumbling into, I wouldn’t recommend this as the documentary has very little exposition in the beginning. The videos themselves are humorous and colorful; the musicians present lack luster acting skills and the lyrics recount tales of love and longing so desperate that it inspires alcoholism.

This film is a part of the Walker Art Center’s Album: Cinematheque Tangier exhibition, which is a project by Yto Barrada, and from what I hear, there is an actual scopitone machine on display in the exhibit. However, as a stand-alone documentary, Treasure of the Scopitones is 54 minutes long, and feels much longer than this due to the documentary’s somewhat repetitious structure. It is mostly comprised of clips from the scopitone videos and occasional commentary from the people watching them and there is very little diverging from that pattern. It gets a bit tiresome after a while and I think if it had a bit more information about the scopitone’s history and how the videos it featured impacted people it would have kept me more invested.

The subject itself is extremely interesting, but the film does little to express that; it gives very little backstory or information about the scopitone musicians, whose names whiz by on screen so fast and with very little context. I’m a big documentary junkie and, for me, production value takes a backseat to the information I’ve received by film’s end. Sadly, most of the information I have on this film’s contents I found after watching it. It has nothing to do with the fact that film is in both French and Arabic, it has subtitles and I can read just fine (with my glasses).

Treasure of the Scopitones, released in 1999, seemed to be created in order to rejuvenate interest in the lost art form that is the scopitone. In 2014, and with the advent of video hosting sites, most scopitone videos can be found online. The story itself is more a timeline of musical vignettes and music provides a culture with stability in an unknown time; I just wish that story had more plot and more information about the musicians, the music and the scopitone’s historical value to the Algerian culture.