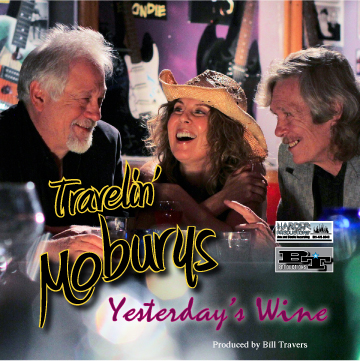 M.J. Kroll, before recently escaping to the Left Coast, dragged me out past South Hell to go see them play the St. Paul hinterlands a year or so ago at the Eagles Club/VFW. I took them in solely as a group. Last time I saw them about a month ago at Minnesota Music Café, I experienced them slightly differently. Over the time that passed, I’d come appreciate some of their depth, and as strong as they are together, there’s no denying each is distinctly skilled, which Yesterday’s Wine, on the BT label, richly demonstrates.

Bill Travers, Francis Duxbury III and Laura Moe offer sweet, down-home sounds. It’s there on Travers’ solo album The Legends (in tribute to the likes of Merle Haggard, Hank Williams, Kris Kristofferson and others), Hide Me by Travers and Duxbury and, bet the ranch, Moe’s solo outing on which she’s presently working. Moe, by the way, is something of a wild card. Along with making beautiful country music, she’s fond of other genres, is an accomplished actor and rankles at the notion that,just because she doesn’t play an instrument (the fellas play guitar), she’s only a back-up.

Yesterday’s Wine is a fine recording with three original songs written by Duxbery: “Like The Same Wine,” “Let Me Know,” and “Prisoner.” “Tupelo Honey” (few people have any business singing Van Morrison; Travers, hands down, is one) and other covers, like Stevie Nicks’ “Leather and Lace,” Leonard Cohen’s “Hallelujah,” and The Eagle’s “Hotel California.” There are a couple classics, too, and some Willie Nelson thrown in. Yesterday’s Wine has a warm feel to it, which, considering how Minnesota weather is finally shaping up, comes in handy—perfectly suited to sitting indoors with the stereo either all by your lonesome or in the company of friends. Released in September, it’s already on the charts at reverbnation.com. Their name, by the way, is a combination of the artist’s names: Travelin’ for Travers, Mo for Moe and Bury shortened from Duxbury.

After sitting in for a couple songs, then hanging out and helping them run up their bar tab, I got a lift home from Travers, who sat for a spell and chatted while we let the recorder run. Travers produced the album, owns the label and is, for all his accomplishments, an unaffected, down-to-earth sort with an easy-going way about him. But who, however seriously he takes his music, enjoys nothing better than a good laugh.

How’d The Travelin’ Moburys come to be?
Well, me and Francis started an open mic down at VFW. It was goin’ real well. Laura, she started comin’ pretty much every week for, jeez, three-quarters, half to a year maybe. She’d be comin’ almost every Sunday, singin’ some songs and singin’ with us.  We were in the middle of doing [Hide Me]. He’d start some of the songs that he was gonna put on [it] and she’d go, “Whoa, I like that,” would come up and sing with it. So, we asked Laura to do some harmony parts and stuff on the CD. After we got done with the CD, we asked her to [join] us. We’re happy to have her. There’s no doubt about it.

It just kind of fell together.
It was really nothin’ planned. We always talked about how good Laura sounded and how she sounded with us. The plan was kind of to leave us two together, just me and Francis do our deal. But, you know, she sang so good with us it was kind of a must to have her.  It proved to be a good decision. I’m very happy with what she does. I think she likes what we do. She likes the freedom to do whatever she wants to do. The same with us. There’s no real set rules.

When you say “no set rules” …
Well, you kind of have the freedom to do any kind of music you want. We don’t say, “Oh, you gotta do a country song, gotta do a folk song.” Anything you bring in you can do well, or think you can do well, we’re gonna try it. That’s the beauty of the whole thing.  We try a lot of stuff. And Laura brings a whole different realm. She’s a little more contemporary that’s out there, right now.

Well, yeah.  Sarah McLaughlin’s “In The Arms of an Angel” is on Yesterday’s Wine.
Exactly.

How was it recording the album?
Great. But, it was pushy. I was pushin’ myself a lot to get this thing done before [engineer Greg Harder] had to leave town. He moved to Sante Fe. I was over there everyday. How it ended up, I’m happy.

You produced this CD, yours, the one with you and Francis, Larry Carpenters. One thing all have in common: You keep it simple.
Right.  That was the whole idea behind every one of ‘em.

Let the music speak for itself?
Yeah.

What artists do you admire?
Well, I’m big fan of Johnny Cash. Big fan of Waylon Jennings, Merle Haggard. That’s probably a lot of my influence. I’m a really big fan of Joe Cocker. He sings with so much feel you can’t help but to get into his songs. He’ll do songs, put his own twist on to it, and make ‘em better. When I first heard him, I was a young kid. I was into country. I heard him and just went, “Oh, wow.” Just like Janis Joplin. When they sing, they make you feel somethin’. [Their] voices may not be the most refined as a lot of they voices out there, but when they sing, you’re there.

What’s your approach playing guitar?
I try to play what I feel. Try to play what I can. Make it fit. I try not to overplay. There’s a lot musicians that play for other musicians. Instead of keepin’ it simple and makin’ people feel what you feel. They’re puttin’ all this other stuff in there and really doesn’t add to the song. That’s just my opinion. I’m not sayin’ I’m right, but that’s exactly how I feel about a lot of stuff. That’s what I like about Francis’ writing. It’s to the point.

What’s next for the Moburys?
We don’t know. We are, right now, in the middle of puttin’ more gigs together. Just trying to get out there. Things are goin’ well. It’s nice to feel there are people out there who like what we’re doin’.