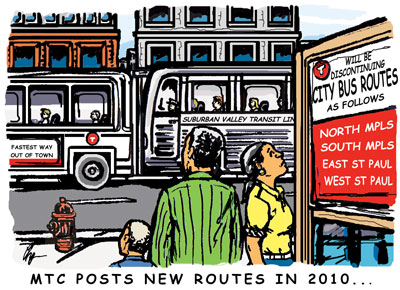 The landscape of public transportation for the Twin Cities metropolitan region is undergoing a process of radical transformation. It is perhaps the most extensive alteration of the public transport structure since the shutdown of the streetcar system and the introduction of bus transit in the early 1950s.

The transformation includes the reintroduction of limited streetcar service in the form of light rail transportation; the planned construction of regional commuter rail lines; and the restructuring of bus service for the region, which will have an impact on the area for decades to come. This restructuring is being driven by, and is inextricably connected with, broader changes in the socioeconomic landscape of the region.

No voices in the black community or other communities of color seem to question the fact that change in the public transportation system is sorely needed; in fact, many think that improvements to the system are way overdue. The big question being asked in these communities is not whether there should be change, but who stands to gain or lose from the changes proposed.

“How is the community going to benefit from all of this?” community organizer Cheryl Wilson asked in an interview with the Spokesman-Recorder. Wilson, who is a staff person with the Metropolitan Interfaith Coalition on Affordable Housing (MICAH), has been involved in efforts to educate and organize communities of color to understand the impact of these changes and to take action to defend their interest.

“How are communities of color and low-income communities going to benefit? I don’t see any of the money being invested in the core city,” said Wilson.

Many in the community argue, like Wilson, that resources currently being expended on public transportation are disproportionately weighted to benefit communities of middle-income and affluent White suburban and city-dwelling residents more than people of color and the working class.

Moreover, these critics contend that cuts and proposed cuts to bus services under the rationale of budget shortfalls have been implemented in such a way as to have a disproportionately negative impact on the poorest and most transit-dependent communities in the area.

Metropolitan Council Chairman Peter Bell sharply disagrees with the assessment of the situation made by Wilson and others. The Metro Council is the body that oversees the transit system.

Bell argued that more transit services are provided to the Northside, South Minneapolis and Summit/University neighborhoods — areas with high concentrations of people of color — than any other sections of the system, a disproportion that he felt was correct based on the greater needs of those areas.

“The fact is that our entire transit system disproportionately serves people of color, and I’m proud of that,” said Bell. “People who are looking for disparities would be better off looking at health care and the justice system.”

Wilson and others argue that that while it may be a fact that numerically more bus routes operate in these areas than in other neighborhoods, this fact taken alone does not help the community to understand the truth about the real-life impact of transit decisions and priorities. Wilson draws a distinction between “bus routes that are designed primarily for other areas and run through the community versus busses that provide service in the community to help transit-dependent people move around to meet their daily needs.”

Moreover, argues Wilson, there is an existing and growing gap between the needs of transit-dependent communities like North Minneapolis, where over 50 percent of the population is without cars, and outer-ring areas where the population is more affluent and has more transportation options.

An example of this was the clash that took place last year when, under the rationale of state budget cuts, Metro Transit planners proposed a series of cuts in bus service that many argued disproportionately hurt the Northside. The Metropolitan Council submitted a proposal that would have eliminated $8.6 million in services. As originally proposed, the plan would have cut 18 routes and reduced service on 34 lines. These cuts were scheduled to go into effect simultaneously with a 25-cents fare increase that went into effect July 1, 2005.

In a special session last summer, the state legislature allocated $40 million in funding for Metro Transit to stop some of the service cuts. After various community organizations voiced concerns about the adverse potential impact on the Northside, some of the proposed cuts were withdrawn, most notably those affecting weekend service on Plymouth Avenue connecting the Near North area with the Broadway Avenue shopping district.

“It looks like a disproportionate number of these cuts were in North Minneapolis,” said Myron Orfield of the University of Minnesota’s Institute on Race and Poverty. Orfield is among those who share Wilson’s contention that the burden of cuts and the focus of the current public transportation restructuring are skewed to the disadvantage of people of color.

Further changes to Northside service
One big bone of contention that has developed between many people in the black community and officials at the Metropolitan Council is the proposed changes to the bus system in North Minneapolis that are part of the Metro Council’s Northwest Metro Study Concept Plan (NMSCP). This is a package of proposals to restructure bus service in the northwest metro area that encompasses 11 cities and reaches from downtown Minneapolis on the east to the cities of Plymouth and Maple Grove on the west, and from Champlin on the north to Glenwood Avenue in Minneapolis on the south.

The NMSCP is one part of the overall restructuring plan for the metro area that includes other such proposal packages for different sections of the metro, according to Metro Transit Director of Customer Service Bob Gibson. The northwest area “encompasses 45 bus routes, 12 percent of our riders, and 119 rush-hour and 65 midday busses,” Gibson told the Spokesman-Recorder.

“We had staff ride buses on each route to assess existing conditions,” said Gibson, explaining the procedure used by Metro Transit officials to determine the changes proposed in the NMSCP.

An immediate concern for organizers and advocates on the Northside is the proposal by Metro Transit officials, contained in the NMSCP, for the new route number 26 to service Plymouth Avenue North. At issue are the frequency of busses and the areas of the neighborhood serviced by the route.

Under the current proposal, members of the community will have to choose between three different options for the new bus run. One option is for the route to run down Plymouth Avenue to Xerxes Avenue and from Xerxes out to Golden Valley. A second option is for the bus to run from Plymouth northbound on Penn and head west on Golden Valley Road out to Golden Valley. The third option calls for splitting the route so that some trips use the first option and others follow the second.

Next week: More on Northside transit needs and the impact of transit decisions on jobs, housing and gentrification.

Share your thoughts on transit in our “Government forum”:https://www.tcdailyplanet.net/forum/66.>/b>