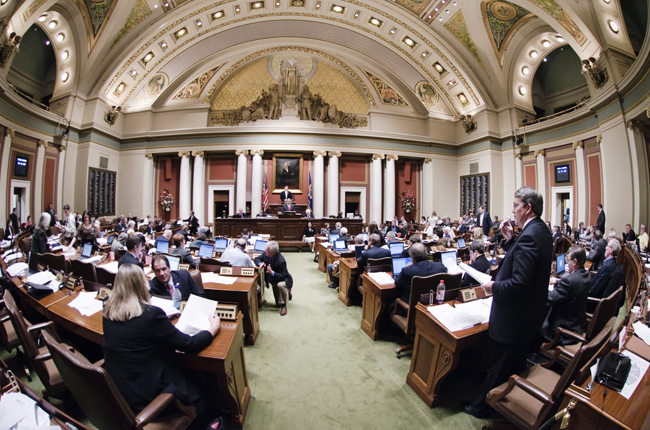 Its route wasn’t as smooth as supporters would like, but the omnibus transportation finance bill was green-lighted March 28 by the House.

Sponsored by Rep. Mike Beard (R-Shakopee), HF1140 now goes to the Senate where Sen. Joe Gimse (R-Willmar) is the sponsor. The House vote was 70-61.

$126 million to $1.18 billion, and is forecasted to increase state highway funding by about $120 million to

$2.56 billion. Rural transit would increase by $1 million from increases in the motor vehicle sales tax, even though the General Fund reduction is $7.6 million for the biennium.

“Because of the slight uptick in the economy, gas tax revenues are coming up again, and we had an uptick in the motor vehicle sales tax, which is dedicated to transportation, 60 percent of it to roads and bridges. We are going to see a significant increase, a 5 or 6 percent increase in funding for state highway projects next year,” Beard said.

Opponents note that actual MVST revenue has fallen short of projections in nine of 10 years, often by tens of millions of dollars, which could lead to an actual decrease in Greater Minnesota transit funding. “To rely on that is to rely on money that probably isn’t going to be there,” said Rep. Kent Eken (DFL-Twin Valley).

Beard said the bill would decrease General Fund spending for Metropolitan Transit by $130 million; however, increased MVST revenue and other factors put the total state funding decrease at closer to $40 million.

“This bill represents about a 9 percent cut to Met Council transit funding on about $400 million worth of state funds,” Beard said.

In a letter, Susan Haigh, the Met Council chairwoman, said that a $120 million cut could mean a $4 fare increase, a 50 percent ride loss and laying off approximately 550 employees.

Beard noted the numbers paint a worse-case scenario, and he questioned their reliability. “How does a 9 percent cut equal that massive a hit to the service of people who depend on transit in this state? I’m concerned about those numbers and how that math works.”

The bill permits the council to transfer uncommitted money in the Livable Communities fund – used to address affordable and lifecycle housing needs and provides funds to assist communities in carrying out their development plans, and the amounts levied and collected under the right-of-way acquisition loan fund program – used to preserve right-of-way in rapidly growing areas – which could only be used to cover operating deficits for transit, paratransit, light rail and commuter rail services.

“This is with precedent,” Beard said, noting the same authorization was given two years ago.

Help for Metro Transit would also come from the suburban opt-outs that have agreed to transfer their $4.2 million statutory increases to the Met Council for regular route service and other transit operations.

Beard said the board, whose activities to improve transit are funded with a quarter-percent sales tax in five Twin Cities metropolitan area counties, has $90 million in reserves. He said when the board was authorized in 2008, its first $30 million went to the Met Council to help with an operating deficit.

Rep. Frank Hornstein (DFL-Mpls) unsuccessfully tried to amend the bill to reduce the reserves of the suburban opt-outs with that extra money transferred to the Met Council for transit operations. “These systems are almost $18 million over the (legislative) auditor’s recommendation for needed reserves,” he said.