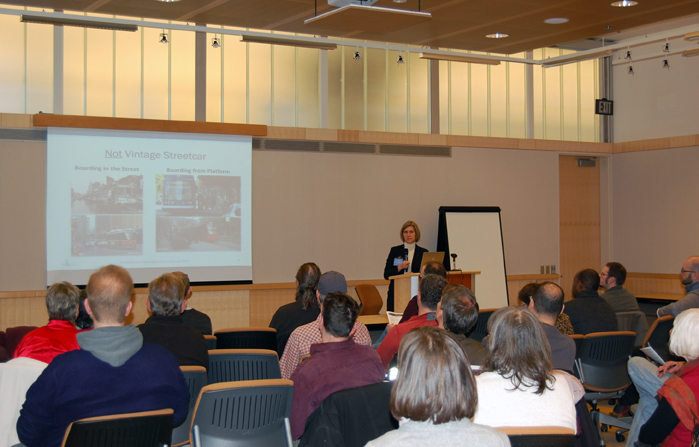 Repeated audience questions about an approximate year that residents might see streetcars or enhanced buses travelling along the Nicollet-Central corridor didn’t get answers at the final open house held at the Minneapolis Central Library on February 14. With a lot of work left before a plan is finalized, and no funding yet secured for design and construction, Anna Flintoft, Public Works Transportation Planner in charge of this project, was hesitant about suggesting any particular year. Although she believes the money would likely be a combination of city, regional, and state sources, Flintoft admitted she did not know exactly from where any money would come.

Organized and led by the city of Minneapolis, in partnership with the Metropolitan Council and Metro Transit, the Nicollet-Central Transit Alternatives Project has been charged with exploring not only how to improve the efficiency and attractiveness of transit service along this 9.2 mile corridor, but also how these improvements could potentially spark new development.  An October 2012 report by the city concluded that the primary bus routes along this corridor, routes 10 and 18, will not be able to meet future ridership demands, adequately contend with economic development trends, and are likely unable to overcome existent deficiencies within the current service.

Handouts and poster boards presented strongly suggest that a majority of the route for this corridor has already been determined.  From northeast Minneapolis, it would begin at Central and 41st Avenues, travel south along Central, pass through Nicollet Mall, and would continue on Nicollet Avenue until 46th Street.  Other roadway options, such as operating along Polk, Monroe, or Fillmore Streets in northeast, or Blaisdell Avenue in the south, earned only “Fair” grades when community sentiment and compatibility with other local and regional plans were taken into consideration, according to an “alignment” poster board at the meeting.

This likely route, however, has two major complications requiring further investigation: the Mississippi River crossing, and how will a route deal with the Kmart store currently located in the middle of Nicollet at Lake Street.  Flintoft said the Hennepin/First and Third/Central bridges are viable options, but that neither decisions nor recommendations have been made.  The final project report, to be published this summer, will likely include two visions for the service connection at Nicollet and Lake, since it is unlikely that the Kmart relocation problem would be resolved within the next few months. Mere mention of the possibility that the store might move provoked momentary applause and cheers from a few audience members, but that might not happen, and the new transit service might have to go around the store.

With the route more or less decided, the next challenge is choosing between modern streetcars or an enhanced bus service.  A third option, the “no-build” alternative, would mean just continuing current bus service.  Light rail transit and bus rapid transit have already been ruled out, because of overall costs, insufficient roadway widths, and the elimination of street parking and traffic lanes that they would require.

“These are not vintage streetcars,” said Flintoft.  Hoping to dispel any notion that this would be a quaint yet antiquated service, Flintoft emphasized how modern streetcars allow a low-floor/no-steps advantage for elderly, wheelchairs, and strollers, would maintain transit signal priority at intersections, and could be reliably monitored for real time arrivals by travelers waiting to board at specially-designed platforms.

Modern streetcars and enhanced bus service share many common features.  Like streetcars, hybrid-electric buses would have low-floors, room for more passengers, and better stop amenities.  Each service option allows for faster boarding—a deficiency cited by many community members in open houses held last fall—as payment is made before entering, so passengers can board through any door.  Both options would have fewer stops, but would run at least as often as the existing bus service.

A stark difference between these two options is overall cost.  Preliminary estimates of the per mile cost for enhanced bus service fall anywhere between $2 and $6 million, while the per mile cost for a modern streetcar line could range between $30 to $60 million.  Despite these costs, supporters of modern streetcars suggest that they will uniquely attract attention to the area and offer greater potential for new economic and residential developments. 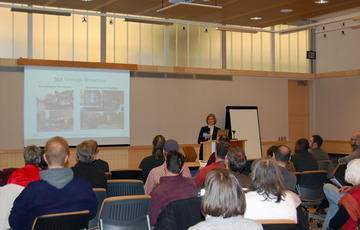 About 50 people attended the third and final open house on February 14. (Photo by Chris Lautenschlager)

Another noteworthy difference between the two is the infrastructure that would be built.  Unlike streetcars, enhanced buses will not require a vast network of tracks, wires, and poles, and would be easily rerouted when necessary.  Although new boarding platforms would be built under either option, enhanced buses would have a reduced construction impact, and could be finished more quickly than a streetcar line.  Flintoft cautioned the audience, “Don’t expect that the modern streetcar [line] could all be built at once.”  Building the streetcar option would take many more years, due to costs and available funding.

Throughout the coming months, the project will conduct a more detailed evaluation of overall costs, potential ridership figures, environmental effects, traffic flow studies, the ability to attract development, and public and other stakeholder sentiment.   A decision on the Locally Preferred Alternative (LPA) is expected by this summer.  Then the Met Council would have to approve a project before it could enter a design phase, which would be followed by an environmental review.