Every day, Metro Transit workers see the importance of affordable public transportation for people who rely on trains and buses. Tuesday at the Capitol, advocates quantified that impact for Minnesota lawmakers considering deep cuts in funding for public transit. After a rally in the rotunda, transit workers and riders delivered 12,000 postcards to legislators and Gov. Mark Dayton. Signed by citizens from across the state, the postcards warned lawmakers of fare increases, job losses and service cuts likely to result from public transportation cuts.

“We need to tell our legislators that when they divide things into wants and needs, transit is a need,” said Jennifer Munt, a member of the Metropolitan Council, which operates the Twin Cities regional transit system.

So far, Republican majorities in the Legislature haven’t gotten the message. In March the House passed a transportation bill that would eliminate $120 million in funding for the Met Council. The Senate passed a companion bill in April calling for $32 million in cuts. 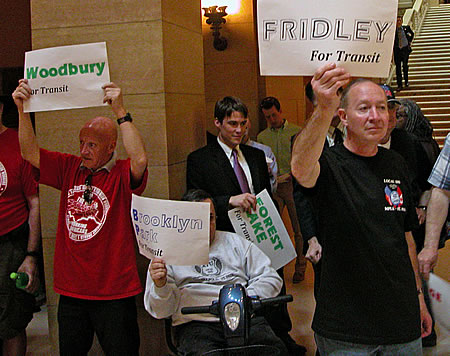 Advocates held up signs (above) showing the many communities affected by transit cuts. Proponents used a wagon (below) to haul postcards supporting public transit to lawmakers’ offices. (Photos by Michael Moore) 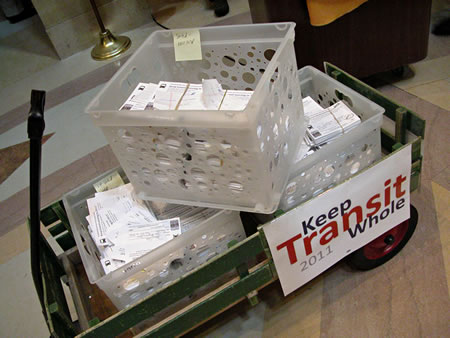 “Public transit in this state will be destroyed” if the House bill becomes law, according to Michelle Sommers, president of Amalgamated Transit Union Local 1005, which represents drivers and mechanics at Metro Transit.

An estimated 550 members of Local 1005 – almost a quarter of the Metro Transit bargaining unit – would lose their jobs under the House plan, Sommers said. Thousands of other Minnesotans would be left without a ride to work as a result of service cuts.

“What good is a job if you can’t get to there?” asked Rep. Frank Hornstein, a Minneapolis DFLer who opposes transit cuts.

Riders left with access to transit services would pay up to $4 more per fare, according to Met Council projections. That doesn’t sit well with Richfield resident Kathleen Murphy, who is disabled and cannot drive.

“Gas prices go up and gas prices go down. Bus fares go up, but they don’t come down,” Murphy said. “We already have seen big fare increases in recent years. It’s getting too expensive for many people to afford.”

The rotunda rally, organized by the Transit for Livable Communities alliance, featured a “roll call” of cities – including suburbs like Lakeville, Shakopee, Eden Prairie, Brooklyn Center and Woodbury – represented by Republican legislators whose constituents rely on public transportation.

Helen Duritsa of White Bear Lake said she wants the option of taking the bus to work, adding that buses and trains ease congestion for commuters who choose to drive to work.

“Every bus takes 40 to 50 cars off the road,” Durista said. “If these cuts go through more people will be in cars. These cuts mean suburban families will pay more to get around and will spend more of their time stuck in traffic.

“We all need a fully funded transit network.”

House and Senate negotiators are at work in conference committee on a compromise transportation bill that, if passed, will go to the governor for approval.

Dayton’s proposed budget calls for no cuts to public transportation.