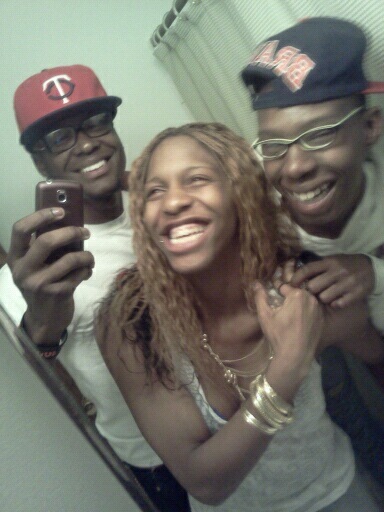 "If you have faith, then anything is possible." - Cece

In the early morning of June 5th,  a young trans woman of color named Chrishaun McDonald and  her friends walked by the Schooner Tavern at the busy intersection of 27th and Lake in Minneapolis.  A white, older bar patron named Dean Schmitz stood at the door of the Schooner.  According to McDonald’s roommate, Schmitz started harassing McDonald, shouting, ” Did you think you were going to rape somebody in those girl clothes?” and adding racial slurs. What happened next is unclear.  Minutes later, Schmitz was dead and McDonald was in custody.   The Star Tribune writes that according to McDonald, Schmitz attacked her and ran into a pair of scissors that she held in self-defense.

Now, in prison, Chrishaun is being held in solitary on a charge of second degree murder.  The trans rights advocate who has been trying to meet with her has been turned away repeatedly.  She is being charged as the wrong gender and media coverage describes her as a “man”.  News from the jail suggests harassment and abuse.  And let’s not kid ourselves – we’re looking at a court system where the deck is stacked against trans people, working class people and people of color.

A representative of the Trans Youth Support Network (TYSN) lays out the situation: “The attack on Chrishaun included racist, transphobic, and anti-feminine verbal assaults. These verbal< assaults are extensions of the violent machine works of our society that are built upon capitalist exploitation of people of color, poor people, and feminine presenting people.

Because she is poor, accessing a competent lawyer was difficult. Without the support of her friends and community, she would have been left with a Public Defender who may not have understood or supported her experiences as a trans woman, as is frequently the case for incarcerated gender non-conforming people.

Had Chrishaun been able to access bail money, she would have had that much more contact with her family, friends, and community supporters.  She is without the freedom to organize support for herself because she’s in the Hennepin County Public Safety Facility.”

This case is a moment of decision  – if we’re queer, then it’s a moment of decision as queers, if white then as white people, if allies  then as allies.   Do we close our eyes and say “at least it’s not happening to me and I hope it never does” or do we get real about  the system that put Chrishaun where she is?

Maybe you’re going to put this down and say “well, someone got killed – I don’t have any sympathy, and besides,  I would never be in that situation anyway.”

Yeah, maybe you wouldn’t.   But if you were — if you were walking by a bar late at night, if you were a young trans woman of color facing down a much older white man, if you had survived the treatment trans women get in this society and you knew that particular score….?

Or put it another way – why should good lawyers be a privilege reserved for rich white cis people?  Maybe we don’t know what happened outside the Schooner, but we know that Chrishaun McDonald should have the same access to good legal representation and the same chance at an unbiased judge and jury as the wealthiest, whitest most cis-gendered person around, and we know how hard it is to make that happen.

-This is the way things work in America – someone has to lose.    There’s always someone to throw under the bus – poor people,  people of color, the non-respectable queers, moms on welfare, the disabled, prisoners.   The people “we” blame and the people whose suffering we ignore.   There’s no wealth without poverty, no good corporate workers without those lazy slackers on state benefits, no respectable womanhood without the other kinds of women, the kinds people can insult and attack.

There’s always someone whose needs are less important than mine, at least until the day  I get tossed under, too.

I do know that trans women of color in the court system face nightmarish obstacles.

According to TYSN, over 30% of trans women of color are incarcerated every year.  “Statistics say that 38% are harassed, 15% are physically assaulted, and 7% are sexually assaulted while incarcerated–and these numbers are likely actually much higher, because collecting statistics on trans people in prisons and jails is extremely difficult.  These violent abuses are enacted upon them by both the police and fellow prisoners or people in prison.  Trans and gender non-conforming people often pose a problem to the gender segregated jail systems and more often than not the consequence is that they are placed in solitary confinement. Prisons and jails are notorious for terrible healthcare and medical neglect for everyone, and transgender people face additional barriers like transphobic and punitive medical care, or denial of transition-related care (like access to hormones).”

“In order to change the prison system, political efforts must be made and legislation must be passed,” writes the TYSN representative.   “For legislation to pass, people must be able to vote.  If over 30% of trans women of color are incarcerated, then they are unable to vote. And it’s very difficult for trans women of color to organize together because their lives are so disproportionately disrupted by policing and imprisonment. It is integral for jail solidarity to take that vote up for them to change these violent racist systems.”

Monstrous systems grow.  If Chrishaun McDonald gets an unfair trial in front of a biased jury, if she gets harassed or  denied medical care in prison, that’s the future we’re choosing for everyone.    It’s a vote in favor of injustice.

Solidarity is complicated, contoured by privilege, identity, power.  We have a lot of opportunities for mistakes and maybe we don’t have all the knowledge and skills that we need.  But we do know what it looks like when people get thrown under the bus, and we need to stop that thing before anyone else gets pushed under the wheels.

There is a community meeting for family, friends and supporters of Chrishaun McDonald on Wednesday, June 29th at Noon at the Trans Youth Support Network (TYSN) – 3405 Chicago Avenue South in Minneapolis.
—

“Some people were dying.  Some people were busy….Some lives are more important than others.  Some deaths are shocking, some invisible.  We are a people in trouble.  We do not act.” – Sarah Schulman, People In Trouble