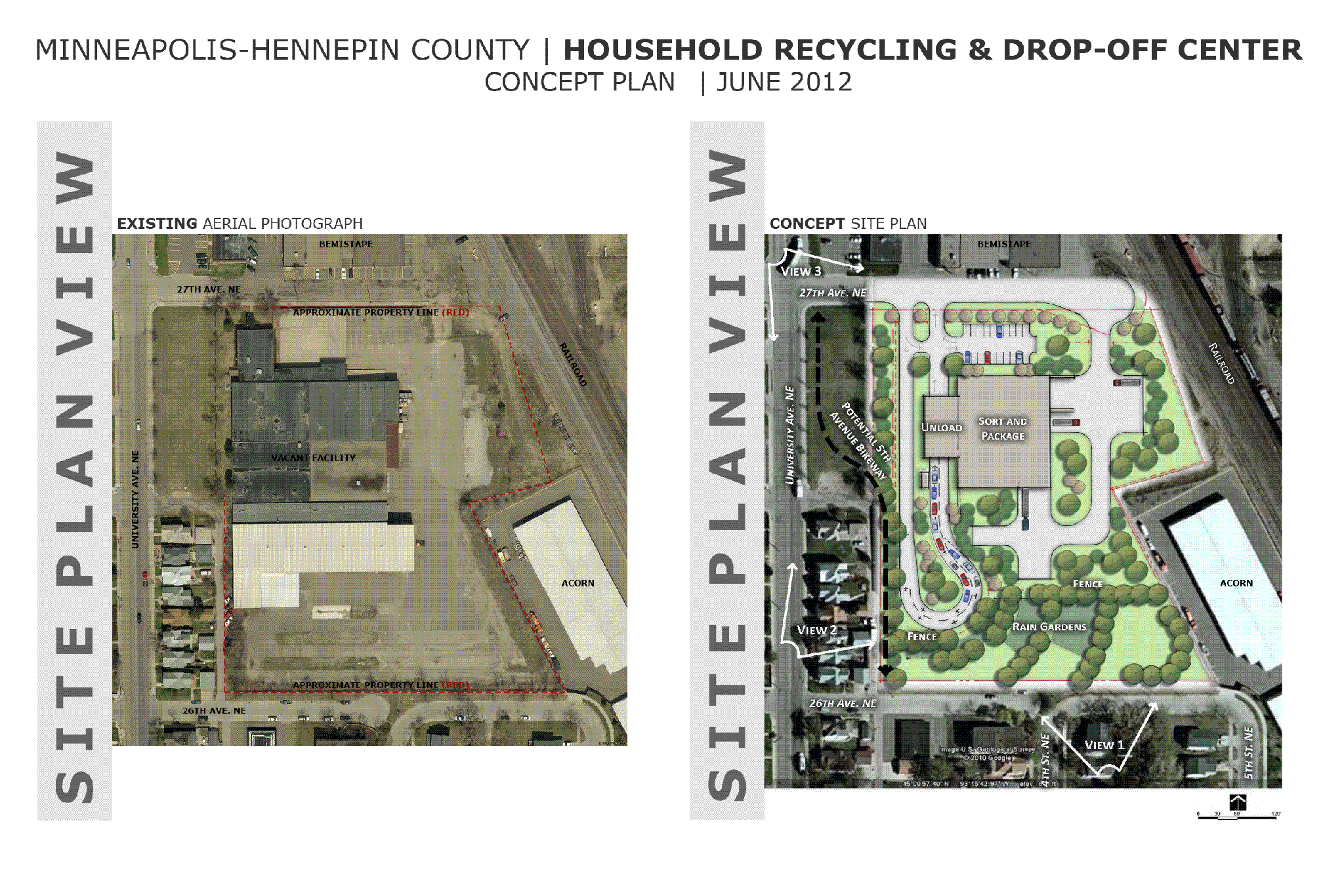 One could almost hear Gilda Radner as Emily Litella: “Never mind.” But the analogy stops there.

In what appears to be a major victory for nearby residents who have been protesting for two years, the proposed Minneapolis-Hennepin Recycling and Drop-off Center no longer includes plans for relocating the City of Minneapolis’ Southside transfer station to a new site at 27th and University in Holland Neighborhood. Neighbors still have questions and challenges for Hennepin County, which plans to build and operate a household hazardous waste recycling facility at the site. The city owns the site, a former corrugated metal manufacturing plant. City and county officials visited the Holland Neighborhood meeting Sept. 13 to discuss next steps.

David Herberholz, Minneapolis’ solid waste director, said the city is considering dropping its voucher program, which allows residents to drop off construction wastes and excessive house cleanout wastes, up to a ton per day, at the Southside facility. He said there are private enterprises well equipped to handle what the city now operates and every resident pays for whether they use it or not. (Just like every resident gets credit for recycling whether they do or not.) Dropping credits and vouchers could result in lower individual solid waste bills, and residents would pay as they needed to dispose of those unusual items.

If the voucher program goes away, it won’t have made sense to invest in building a new building on the Northeast site, Herberholz said.

Since 2004, explained First Ward Minneapolis City Council Member Kevin Reich, the City and County had discussed jointly building a facility that could handle the types of wastes the County now collects at drop-off facilities in Brooklyn Park and Bloomington. They note that the percentage of households participating is highest within six miles of those facilities, and that Minneapolis logs very low participation. “Where are those items going now? Are they being stockpiled in basements and garages? Probably.”

The county occasionally holds drop-off events in the neighborhoods, and Hennepin County Supervising Environmentalist Amy Roering said the participation isn’t what it should be.

Some examples of what the County could collect at 27th and University: Cardboard, televisions, paints, lead-acid batteries, tires, mattresses and box springs. About five trucks a week would visit to take away the collected wastes, Roering said. For information on the Bloomington and Brooklyn Park facilities, visit hennepin.us/dropoffs.

Nearby residents began protesting as soon as the City and County revealed their plans for the site. They formed a nonprofit organization called Don’t Dump on Northeast (DDONE).

In November, 2010, the residents challenged the project in a letter to Minneapolis Zoning Administrator Steve Poor, arguing that the plans for the site required a heavy industrial zoning, and the property is zoned I-2, a medium industrial zoning. Poor responded that the planned facilities are allowed in I-2 zoning. The residents appealed his decision to the City’s Zoning Board of Adjustment, and to the Minneapolis City Council, and both affirmed Poor’s determination.

In 2011 the residents filed a lawsuit against the City; it was dismissed because, according to Hennepin County District Court Judge Bruce Peterson, the City’s plans were not far enough along to be judged by the court.He wrote, “All parties will benefit from providing the City time and opportunity to thoughtfully develop a final proposal, the details of which may then be fully considered in the appropriate forum.”

Commercial architect firm LHB drew a preliminary concept plan that does not include the city transfer station, and the Hennepin County Board placed the project and its $10-$12 million budget in its 2012 Five-Year Plan.

Being at that point triggers public meetings to gather residents’ thoughts on how to design the facility, traffic concerns, noise, etc. It was explained that it would take three to four months to get schematics, another couple of months to get through the County Board and then another five to get construction documents and bidding done; a total of four points at which there would be public meetings. They would be building “no earlier than 2014,” said Roering.

City staff explained that while they would not be involved in the eventual operation of the site, as the current site owner, the city would be involved through site plan review by the Planning Commission, so those would be additional check points where neighbors can be heard.

Resident and Holland Neighborhood Improvement Association Board member Dan Scoggins asked if there could be a neighborhood committee to assist the County with their design. Columbia Park and Marshall Terrace residents were invited to the Sept. 13 meeting, and HNIA board chair Adelheid Koski said those two neighborhoods should also be involved going forward.

Board member Lily Vaughn said “one and a half years ago 70 percent of Holland said in a survey that they don’t want it,” and discussion ensued reiterating that the plan had changed and how expensive surveys can be. Koski said the HNIA board would discuss it in about a week. Reich said “We’ll defer to the host neighborhood,” and for the moment, his office would “switchboard” calls with questions or comments.

Among the points brought up at the meeting: