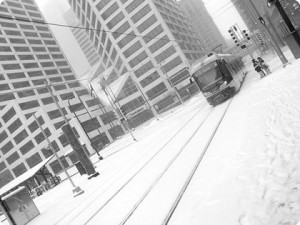 Blizzards provide an excellent motivation to stop and ponder how we can keep people moving in dangerous conditions. Of course, there is a great deal of merit to realizing that weather is often greater than we are, and we shouldn’t try to pretend that all is normal when 17″ of snow is falling and the roof of the Metrodome is collapsing.

In order to keep our economy moving, however, we need to be able to move around after the storm with some degree of normalcy. Luckily, we have excellent plowing services that are working non-stop to clear the way after the worst blizzard since Halloween of ’91.

During Saturday’s storm, a great deal of transportation shut down. There were over one hundred car crashes, hundreds of cars slid off roads, and seventy buses got stuck – as well as, tragically, a few emergency vehicles.

White-out conditions closed 165 miles of  I-90 in southwestern Minnesota. Plows struggled to meet the heavy demand.

St. Paul stopped towing cars that were on the street because they just couldn’t get to them – and that is the first time St. Paul has done that since the ’91 blizzard.

At MSP Airport the vast majority of flights were canceled.

But the trains kept a-rollin’. Both the Hiawatha Light Rail and the Northstar commuter rail remained in operation throughout the storm. This often happens during snowstorms in cities, because clearing tracks is a simple and well-defined task, and it is one that carries a high priority.

It also illustrates the need for diverse transportation modes. Snowstorms are just one of many examples of how several modes of transportation can cease to be viable for an extended period of time. In this case, buses were stuck in the same boatc- or, rather, snowbank – as cars, because they rely on the same infrastructure. Rail kept moving because it does not.

There are also cases where the tables are turned, as when a rail tunnel is blocked and trains cannot run their entire route.  The point is that emphasizing only one mode of transportation is unsustainable for a number of reasons, just one of which is mobility during weather emergencies. As we continue to shovel out, it will be useful to remember what kept a-rollin’ during the worst blizzard in the past 20 years, and continue to invest in it and other alternative transportation.