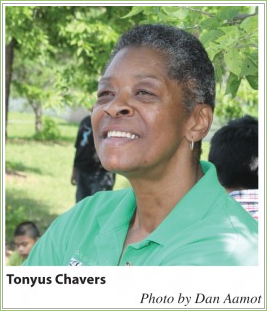 The Minnesota Lynx and the Chicago Sky on Saturday will wear uniforms with “IX” on the front of the jerseys to mark the actual day, June 23, when Title IX of the Education Amendments became law. Pioneer athlete Tonyus Chavers proudly calls herself a “Title IX baby.”

MSR Editor’s note — June marks the 40th anniversary of President Richard Nixon signing Title IX into law on June 23, 1972. Ever since, the law has been lauded for increasing the numbers of girls and women participating in sports at the secondary and collegiate levels. “View” will look at the law in an occasional series, primarily on whether or not it has benefited Black girls and women over the years. This week: a “Title IX baby.”

“We grew up playing with the guys because we didn’t have girls’ teams,” says Chavers on life before Title IX. “Those women who played with me [in college] from 1976 to 1979, we all got scholarships, and that wouldn’t have happened without Title IX.”

However, Chavers’ “her-storical” life hasn’t been fully told until now. After three seasons at LeMoyne-Owen College in Memphis, where “my thing [was] scoring and stopping other people from scoring, I averaged about five blocked shots a game,” she proudly points out.

Then Chavers did something that was virtually unknown back then among women hoopsters but was becoming common practice by men basketball players: She left college after her junior year to play professionally, in her case for the Women’s Professional Basketball League (1978-81).

“I felt like it was an awesome opportunity” to leave early, she admits, “and I didn’t want to pass it up.” She then tried out with a teammate for the St. Louis expansion team, “and we both ended up making the team” for the 1979-80 season.

“Then I was traded to Iowa for the playoffs and made it to the championship round, but lost to New York three games to two. The following year, I started out in Nebraska [and] then got traded to Minnesota,” continues Chavers on the Fillies, who played at the Met Center and the Minneapolis Auditorium.

“I really loved the Twin Cities and decided to stay around,” she says. The league finally folded in 1981 because of bad finances.

“My only regret in life is that I passed up an opportunity to play overseas” in order to play in the ill-fated ABL, says the Southern-born Chavers, now a teacher at Green Central Elementary School in Minneapolis. “But I know it was meant to be, because of the life I have had here.”

“I started there at North in the mid-’80s as a JV coach,” says Chavers, whose prior coaching experience was gained at the Boys and Girls Club, where she worked after the ABL ceased operations. After she later left the school, Chavers was encouraged by one of the players to apply for the head coach vacancy. Then North AD Richard Robinson hired her, and she coached the Polars for a few seasons in the early 1990s.

Chavers’ “her-story” isn’t talked about much. “The kids at Green know, but they sometimes get confused [and say,] ‘Ms. Chavers used to play in the WNBA,’” she says. “I say, ‘No, no.’ I explained to them that I played at a time when the country wasn’t ready for [women’s pro basketball].

“We had talented players too, but we didn’t have the coaching kids have today, being coached as early as sixth grade,” notes Chavers. “That was unheard of when I was growing up.”

“I literally prayed” for a women’s pro league such as the now-16-year-old WNBA to finally take hold in this country, says Chavers. “I remember when the WNBA announced they were coming to Minnesota [in 1999]. It’s just awesome to see the players they have now.

“I feel real blessed, because I’ve had a lot of firsts,” says Chavers, “being in the first pro league [and] being the first in my family to graduate from college. The college I played for, I was on their first [women’s] team.

“People have asked me do I wish I was born at a different time and was playing in the WNBA right now,” she concludes. “I always tell them no, because I really like being a pioneer. I really do. I wouldn’t change a thing.”