Little Crow was killed after the war, while picking berries near Hutchinson. His body was mutilated, and various pieces of his body, including his scalp and skull, ended up at the Minnesota Historical Society. (Photo by Sheila Regan)

In Minnesota, as in other parts of the country, white settlers stole the Indian people’s land, under the cover of laws. According to As the Grass Shall Grow and Rivers Flow, by Clifford Trafzer, In 1500 Native Americans living within the border of what became the United States owned approximately three billion acres of land.  By 1887, whites had reduced their land base to 150,000,000 acres.

Forest City to Fort Snelling: The U.S.-Dakota War of 1862

In Minnesota, an 1805 U.S. treaty with the Sioux allowed the United States to establish military posts on nine square miles of land at the mouth of the St. Croix River, including St. Anthony Falls and extending nine miles on each side of the river. In return, the U.S. government was to pay $2,000 (about two cents an acre) or to “deliver the value therof in such goods and merchandise as they shall choose.” The 1805 treaty allowed the Dakota to continue to pass, re-pass, hunt or “make other uses” of the land.

Waziyatawin is a Dakota writer, teacher and activist with a PhD in American History from Cornell University. She wrote in What Does Justice Look Like? that the 1805 treaty only contained two Dakota signatures, and that the United States also provided 60 gallons of liquor to the men in attendance, a frequent tactic, according to Waziyatawin, used by the United States by “lubricating the dealmaking.”

Another treaty with the Dakota was made in 1837 during Andrew Jackson’s policy of Indian removal. This treaty ceded all Dakota land east of the Mississippi for $1 million.  However, instead of a lump sum, the treaty divided the money, so that while some cash was given out, much of it was to come in payments over time. Some was to go toward farming equipment in order for the Dakota to take on the white man’s ways, some was to go toward medical aid, some was to come in the form of goods, and some was to pay off debts to the white traders.

After the 1837 treaty was signed by the Mdewakanton leaders, one of the four Eastern Dakota bands, the promised goods and payments did not arrive on time, according to Linda M. Clemmons in We Will Talk of Nothing Else: Dakota Interpretations of the Treaty of 1837.

One clause of the 1837 treaty provided that the government would invest $300,000 and pay the Mdewakanton “annually, forever, an income not less than five percent. . . a portion of said interest, not exceeding one third to be applied in such as the President may direct.”  According to Clemmons, all of the parties agreed that the clause meant that the government was to spend $5,000 per year for the benefit of the Dakota.  But instead of paying in cash, the government interpreted the clause to mean that money would pay for educational programs by missionaries.  The Dakota disagreed, and argued “that at the time of the treaty they were assured that the money be used for something other than education.”

According to Clemmons, because no compromise could be reached, by 1850 the unpaid amount due had accumulated to more than $50,000.

In 1851, the Treaty of Traverse de Sioux  was signed with the Sisseton and Wahpeton bands and the Treaty of Mendota was signed with the Mdewakanton and Wahpekute bands. These two treaties transferred most of the Dakota land in Southern Minnesota to the U.S. government and called for the U.S. government to assist the Dakota in schools, trade, and farming, and to pay them yearly in food and gold. Waziyatawin writes that the United States threatened to withhold rations (guaranteed by previous treaties) if the Dakota leaders did not sign the treaties.

The treaty also called for the U.S. government to give the Dakota money to pay for the debts the Dakota owed to traders. That money ended up going directly to the white traders, but the Dakota’s debt to the traders continued to grow, because prices were allowed to remain very high.  Food that was supposed to come to the Dakota frequently arrived rotten, causing widespread hunger.

In 1858, Minnesota became a state, and several Dakota bands, led by Little Crow, traveled to Washington, D.C., to sign the Treaty of 1858, which entailed losing the Northern half of the reservation along the Minnesota River and rights to the quarry at Pipestone, Minnesota.

Meanwhile, more and more settlers came to Minnesota, and game became scarce.  Promised goods owed to the Dakota never came.  The Dakota were starving.  They were angry.

On August 15, members of the Mdewakanton and Wahpekute went to the Lower Sioux Agency to negotiate to obtain food, and were rejected without payment.  According to legend, trader Andrew Jackson Myrick said, “As far as I’m concerned, let them eat grass.”

Two days later, violence erupted when several Dakota men attempted to steal food and ended up killing settlers near Acton, in Meeker County.  Soon, Little Crow agreed to lead an attack against the Lower Sioux Agency.  Andrew Myrick was among those killed, with grass stuffed in his mouth.

The Dakota then attacked various settlements in Milford, Leavenworth, and Sacred Heart.  Battles continued at Fort Ridgely and New Ulm.  The war continued with the Battle of Birch Coulee, and at Fort Abercrombie.  The Dakota lost the Battle of Wood Lake and surrendered at Camp Release on September 26, 1862. In all, the war lasted less than six weeks.

Some 303 Dakota warriors were sentenced to death, but President Lincoln pardoned some of them. On December 26, 1862, 38 were hanged in Mankato — the largest mass execution in this country’s history. 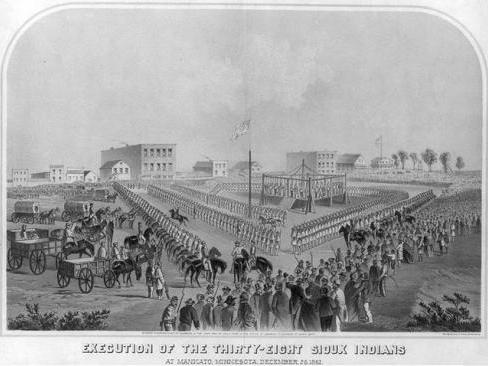 The pardoned prisoners were imprisoned and eventually moved to a camp in Rock Island, Illinois, where a third of them died.

Other Dakota died in the aftermath of the war. Some 1600 Dakota women, old men, and children were sent to a concentration camp in Pike Island, Minnesota, at Fort Snelling.  Some 300 died there, according to Corrin Monjeau-Marz in Dakota Indian Internment at Fort Snelling, 1862-1864.

In 1863, the U.S. Congress declared all treaties with the Dakota null and void and expelled the Dakota people from Minnesota. Bounties were set as rewards for killing any Indians who remained in the state.  An issue of The Daily Republican, a newspaper from Winona, Minnesota, dated September 24, 1863 stated:

The state reward for dead Indians has been increased to $200 for every red-skin sent to Purgatory.  This sum is more than the dead bodies of all the Indians east of the Red River are worth.

That meant that white settlers were paid for killing Indians.

For Little Crow, the bounty on his scalp was set at $500.  He was killed while picking berries near Hutchinson.  His body was mutilated, and various pieces of his body, including his scalp and skull, ended up at the Minnesota Historical Society.  In 1971, Little Crow’s grandson Jesse Wakeman fought to be allowed to bury his grandfather, and eventually managed to have the remains returned.  Little Crow is now buried in Flandreau, South Dakota.

The only Dakota who were allowed to stay in Minnesota were those from the Mdewakanton band, who didn’t fight in the war.  The Mdewakanton were given reservations at Lower Sioux, Prairie Island, and Shakopee.

Most of the remaining Dakota fled Minnesota, with many ending up in Canada or at the Crow Creek Reservation in South Dakota, where many more died.  Others joined up with other Dakota bands for continued struggle against the United States.